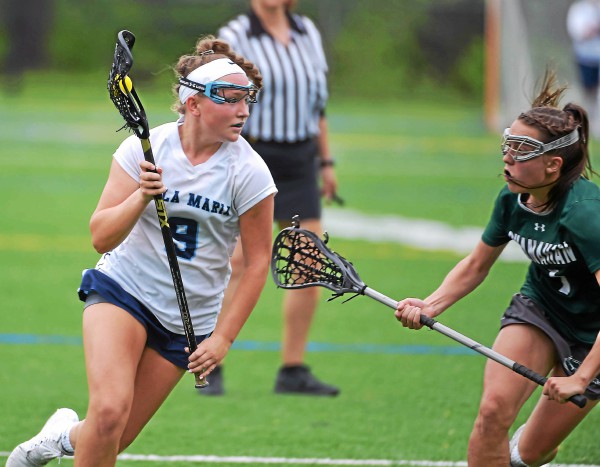 Malvern >> When the final second ticked off the clock at the end of Villa Maria’s 14-4 win against Bishop Shanahan in the second round of the PIAA District 1 2A playoffs Thursday, high-scoring sophomore Hannah Young exploded in joy.
“I hugged [teammate] Sarah Delaney on the sidelines, and then we all ran out to [goalie] Maddie Medve,” said Young, a few minutes after her squad clinched a PIAA 2A state tournament berth with the victory. “My heart’s still racing.”

To view a photo gallery of this game click here
The Hurricanes (17-2) got off to a fast start Thursday, scoring two goals in the first five minutes of the game, and building an 8-1 lead by halftime. At the half, Young already had a hat trick, and she finished the game with five goals – for the third time this season.
“Our team’s energy was so high at the start of this game,” said Young. “Our players were ready, our coaches were ready. We worked so well as a team today – our offense moved the ball, our midfielders won the draw controls, and Maddie [Medve] – she’s our rock back there.”
Villa Maria head coach Allie Sweeney said, “Before we took the field today, I told the team two things – first, we need to play our own type of game, and second, we needed togetherness. We got that togetherness and communication today, particularly between our goalie [Medve} and our defense.”
Facing a Shanahan team that scored 20 goals against host Jenkintown in the district opener, the Hurricanes held the visitors to one first-half goal.
“Our defense is one of our strongest parts,” said Sweeney. “We knew that Shanahan had aggressive, great shooters, but our defense came through – they were aggressive but not too amped up. Adele Iacobucci [four ground balls] was coming up with everything, and our whole team did a good job on capitalizing on turnovers and mistakes. And Maddie Medve [10 saves] came up big when we needed her to.”
On offense, the Hurricanes played a patient passing game, committing a season-low seven turnovers. And they spread the ball around – seven different Hurricanes scored, and six Villa Maria players dished out at least one assist.
With the victory, the Hurricanes advance to the District 1 semifinals Tuesday, where they will play the winner of Friday’s matchup between No. 4 seed Gwynedd Mercy and No. 12 seed Mount St. Joseph’s.
After Villa Maria bolted out to a 2-0 lead five minutes into the game on quick back-to-back goals by Delaney and Bridget Finley, No. 9 seed Shanahan (11-8) came right back with a score from Saint Joseph’s University-bound senior Kaela Smith.
Following a key save by Medve, the host lengthened their lead to 3-1 on an Iacobucci-to-Margie Carden connection; then soon after went on a two-minute, three-goal scoring burst. Young scored after a long run to make it 4-1, tallied again on a nice pass from Bridget Finley 39 seconds later, then Erin Finley penetrated Shanahan’s defense for a quick score and a 6-1 lead with 5:59 to go before the half.
Shanahan livened things up at the start of the second half when Gianna DeCesaris scored 13 seconds after the opening draw control, then Smith scored her second goal of the afternoon four minutes later to make it 8-3.
Villa Maria then ran off some long possessions, two of which ended with Erin Finley goals, the second with 10:48 left to give the hosts an 11-3 lead. Finley finished the game with a hat trick.
Shanahan scored its final goal of the day with 3:56, on a Smith-to Gabby Richter connection, which made it 13-4.
Two minutes later, Young fired in her fifth goal of the game, penetrating the Shanahan defense after a long run, then splitting a double-team and rocketing a shot into the top left corner of the net.
By the end of the game, the host Hurricanes had won 13 of 20 draw controls, with Abby Walheim getting seven of the wins.
On the Shanahan sideline after the game a few tears were shed, as the Eagles’ season is over.
“We scrapped and battled all season,” said Shanahan head coach Kacy Small. “We played every game full speed, beat some big teams, and lost some close games. We came up short today – we just didn’t get enough offense early.”

Owen J. Roberts rolls over Boyertown, moves a step closer to state playoff berth
CB West too much for Methacton in District 1-3A 2nd round