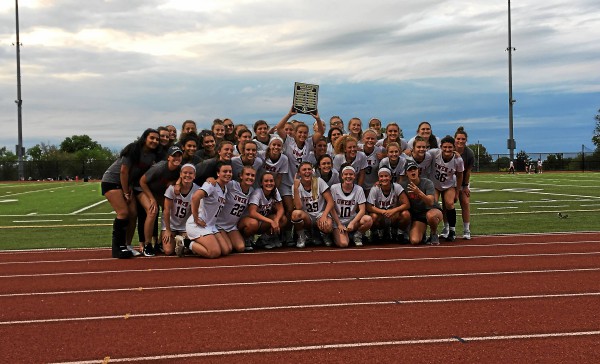 Four years ago, the program was in a state of frenzy in search of a head coach just before the season kicked off.

Two years later, the program had to deal with the graduation of three star players, including its two leading scorers.

And this spring, the Wildcats were forced to change direction late in the year when head coach Amanda Kammes departed for a new job in Chicago midseason.

Yet somehow, some way, they have persevered.

So when Thursday’s Pioneer Athletic Conference final became a two-day affair — postponed midway through due to lightning on Thursday night — the Wildcats were once again up to the task. And it all paid off Friday night back at Methacton. “Every year has been different for us, that’s for sure,” said OJR senior defender Kylie Cahill, a four-year starter. “Different team, different atmosphere — but in some sense, it’s been all the same. We’re a team. We stick together, we work together, we go hard for each other.”

With a thunderstorm threatening to hit the area all throughout Thursday night’s game, both teams were forced to pack up and head home with OJR leading 6-5 with 21:18 remaining in the second half.

That 30-minute bus ride, explained Cahill, proved to be more important than anyone could have imagined. “It was crazy. At first, people on our bus were angry, saying ‘We could have played in the lightning!’” she said. “But I think it was good for us. In the end, we had time to calm ourselves down for the night and to think about all the things we did well in that first half and things we needed to work on.

“I think we settled all of that when we first stepped off the bus today.”

Nearly 23 hours after the game was initially put into a weather delay, the Wildcats looked thunderstruck when the game started back up on Friday. Boyertown secured the opening draw, then worked the ball methodically around the pitch before Sydney Fox capped a four-minute possession with a score off a feed from Hayden Corcoran to even it up at 6-6 with 17:34 remaining.

A couple minutes later, Delahaye got the ball in the Boyertown crease, drew a foul call and was awarded an 8-meter. Her shot — a dart headed for the top of the net off the whistle — was stuffed by Bears’ keeper Sarah Didget to keep the game tied.

“We didn’t panic,” said Cahill. “Our coaches have taught us that there will be goals scored for us and goals scored against us. We just have to keep our composure and stick together.” Boyertown’s Sydney Fox (1) celebrates with teammates after scoring a goal during the second half of the PAC Championship on Friday night. (Thomas Nash – Digital First Media)

That composure proved the difference.

With about seven minutes to go, the OJR defense worked a turnover on the Boyertown end, then got the ball out to midfield. From there, the Wildcats’ offense got set before Delahaye finished one from the right side of the net on a pass from Maddi Koury to give OJR a 7-6 lead with 6:57 left.

“We got the ball, slowed it down through the ‘X’ and worked it around a little bit,” recalled Delahaye, a transfer from The Hill School. “We wanted to get a play, get an open cut and a good look at the net.

“When the ball was coming to me, I was thinking ‘We’re gonna put this in and we’re gonna finish this.’ We had to finish it as a team.” Delahaye then put the game out of reach with another score nearly five minutes later, sending the OJR players and faithful into an uproar louder than any thunder that could have hit the area.

Although new to the scholastic scene with Owen J. Roberts, Delahaye knew just what she was getting herself into when she transferred from Hill.

“It’s a completely different atmosphere and team here, we’re like a family,” said Delahaye. “I knew a lot of the girls on this team because we grew up and played together. This team has always been like a family to me — the seniors are like our big sisters. We look up to them like they’re our world. They represent Owen J. and who we are.” This year’s crop of seniors at OJR find themselves in a rare class. The Wildcat seniors only know victory in the league, with a whopping 44-2 regular season record against conference opponents the past four years.

And on Friday night, they found themselves up against Boyertown, a storied program that had at one time run the dynasty in the league for over a decade.

“Before we got here, it had always been Boyertown, Boyertown every year,” said Cahill. “But we changed that. We knew that there was no way we could give this up.” Fox scored three times for Boyertown, including a pair late in the first half amid a key push from the Bears after trailing 5-2. Amanda Diachynsky, Hannah Mitchell and Kylie Webb each had scores for Boyertown.