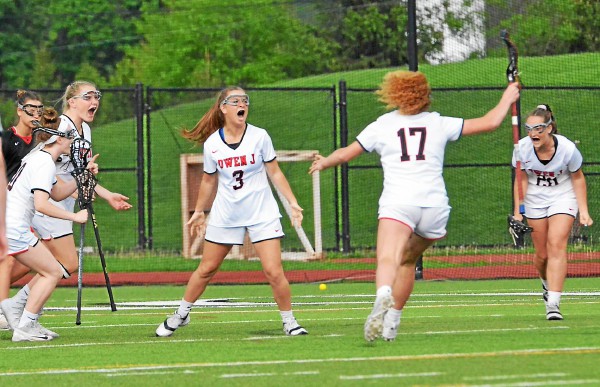 And she’ll travel back Friday night with one thing still remaining.

A senior attack for the Wildcats, Kilgallon registered her 100th career goal on the game’s opening possession as Owen J. Roberts’ quest for a fourth straight PAC title was halted due to lightning with Owen J. Roberts leading 6-5 over Boyertown with 21:18 remaining in regulation.

The game will resume on Friday night at 7 p.m. back at Methacton. “I knew I had one left coming into this game,” said Kilgallon of her 100th goal. “I’ve been working toward it every game. To hit it in the PAC championship means so much more.

“I said it as a joke today during school and to my family —I wanted to score it right away. Right off the bat, I wanted to set a tone for us.”

The night featured a lightning delay that spanned an hour and 27 minutes. Twice the players were called back to the field and lined up for the draw before a lightning strike forced them back inside the school. “During the wait, we actually closed our eyes and pictured ourselves doing certain things,” she said. “Then we went around in a circle and talked about how we get hype.

“We wanted to stay focused. We didn’t want to lose track of what we wanted to do.” The Wildcats’ latest PAC championship run would put a cap on yet another remarkable season. Since winning their first conference title in 2015, Owen J. Roberts is 44-2 in PAC play, the only league losses coming this season against Boyertown (10-9 on April 30) and in 2016 against Spring-Ford (12-10 on April 11).

A Boyertown win would be the Bears’ first since winning it in 2014, which was their 11th straight PAC championship.

OJR jumped out to a two-goal lead within the first two minutes of the game Thursday. Kilgallon registered her milestone goal on the Wildcats’ opening possession, then added her 101st on a feed from sophomore Maddi Koury at 22:39. Boyertown junior Amanda Diachynsky answered back two minutes later on a feed from Jen O’Connor before Owen J. Roberts went on a three-goal tear over the next 12 minutes.

Sophomore midfielder Hannah Delahaye scored her first goal of the game at 13:52 before junior Sophia Murray added her first goal three minutes later. Kilgallon then made it a four-goal game with a wrap-around score from behind the net at 8:45. From there, Boyertown found a spark of life. Senior midfielder Sydney Fox scored on a free position four minutes later, then finished a feed from Hannah Mitchell to make it 5-3 with 51 seconds left in the half.

In the second half, Boyertown kept the pressure up, soon making it a one-goal game after senior Kylie Webb scored on a free position 90 seconds in.

After OJR midfielder Eloise Gebert and Mitchell exchanged goals, the horn sounded at Methacton to clear the stands and sent both teams into the auditorium for good with OJR up 6-5 with 21:18 to go. During her portion to share with her teammates what gets her hyped up, Kilgallon explained: “I stay hype when we celebrate together as a team. We celebrate everything we do.”

Now, she and the Wildcats will set out to celebrate another goal of hers Friday.