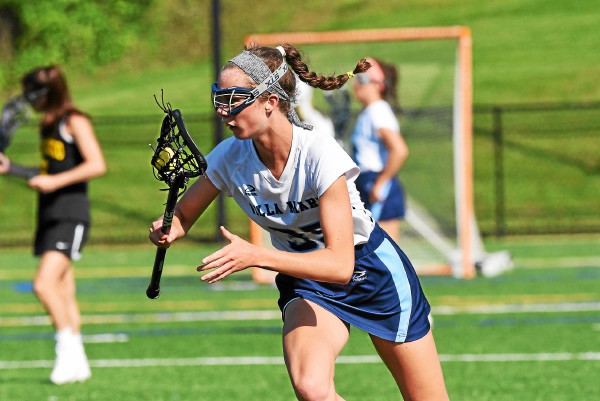 Malvern >> The Villa Maria Academy began its District 1 AA opener against Interboro Wednesday afternoon with surgical precision, driving deep into Buc territory time after time, passing to each other without a hitch, and scoring on nearly every drive.

Less than 10 minutes into the game, the top seed Hurricanes had a 13-0 lead against 16th seeded Interboro.

For the remaining 40 minutes, Villa Maria controlled the ball, passing often but shooting sparingly, and finished with a 20-0 win.

With the victory, the Hurricanes (16-3, 13-0) advance to the second round of Districts Saturday against No. 9 seed Upper Merion, which edged eighth-seeded Mount St. Joseph’s, 13-12, in overtime in their first round clash.

“This was probably our fastest start in a game this season,” said Villa Maria’s first-year head coach Ali Mongan. “It was a good, clean game [for us], and I told the players after the game that they deserved it – it was a nice, crisp game, something we needed.

“Before the game I told our players that Interboro was coming in as a 16 seed, so they have nothing to lose and they’ll probably play [pressure-free]. I told our team that we need to come out like it’s a championship game, a win-or-you’re-out type of game – which is what the post-season is like.”

Fantazzia, who will be playing lacrosse for the University of Massachusetts next year, played a key role in the Hurricanes’ dominant time of possession, winning a team-high seven draw controls.

“I thought Audrey played particularly well today,” said Mongan. “It’s nice to have her on attack – she sets the tempo.”

Within the next two minutes, Iacobucci and Young each scored a second goal, and Villa Maria had a 7-0 lead. Iacobucci, who will be playing lacrosse for LaSalle University next year, dished out five assists Wednesday.

“Annina is our leader on attack,” said Mongan. “She is always spreading the field, looking for feeds, and scoring goals when she has the [best] opportunity.”

With the score 9-0, Villa junior midfielder Erin Finley scored back-to-back goals within one minute to give the hosts an 11-0 lead with 18:31 left in the first half. Finley also won five draw controls Wednesday, and dished out four assists.

Midway through the first half, Villa’a Paige DeMutis scored back-to-back goals within 31 seconds of each other to give the Hurricanes a 15-0 lead with 12:04 to go before halftime.

The hosts entered halftime with a 17-0 lead, and after Delaney scored her second goal of the game four minutes into the second half (she also dished out five assists Wednesday), the hosts only scored two more goals in the final 21 minutes.

Meanwhile, Interboro worked up a few drives into Villa Maria territory in the second half, but every time they took a shot at the cage, Villa Maria goalie Maddie Medve (five saves) turned them away for her second shutout of the season. Medve now has 147 saves for the season, averaging nearly eight per game.

For Interboro (9-8), Wednesday’s loss marked the finish to an encouraging 2017 campaign. Buc freshman Morgan Reed has been one of the leading point scorers in Delaware County this spring.

“This was a season of transition and change for us, but we put our best foot forward throughout the season, and I’m proud that we made the [district] playoffs,” said D’Alonzo. “It’s the first time we’ve been in the playoffs in a while.”