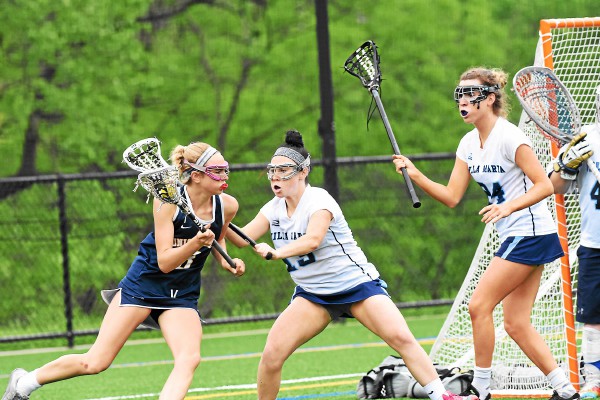 Malvern – Unionville and host Villa Maria Academy had a combined record of 24-4 heading into their Friday afternoon lacrosse contest, so maybe it wasn’t a surprise that following the Indians’ 10-9 win, both coaches were pleased with their respective squads.

“We were trying to be aggressive today, and our defense really got aggressive when Villa Maria got inside the 8,” said Sheehan, whose squad built a 10-4 lead with 13 minutes to play.  “[Defenders] Allie Ward and Taryn Burke really did a good job defensively, and [freshman defender] Maggie Lawrence did a good job on ground balls and transition.”

Meanwhile, Villa Maria head coach Allie Mongan said, “If there is such a thing as a great team loss, today was it. We made a great comeback at the end, and it showed me that we can compete with the best [outside our league].

“I told our team after the game that I was really proud of their hustle and intensity. I’ve never seen them play as a unit – all of the players at the same time – like I did today.”

Unionville (12-2) never trailed Friday, and jumped out to a 5-2 lead midway through the first half on a trio of goals by midfielder Erin Garvey and some tough team defense.

“Villa Maria’s a really fast team, and we did a good job staying on their cutters,” said Burke. “Also, Villa’s offense works together [well] as a unit – they don’t have one big player that everything centers around – so you really have to work together defensively as a team. We remembered to talk to each other [on defense] today.”

Sheehan said, “As the game went on, I was really pleased with the way we were patient with the ball. In our first time out of the game [with Unionville leading 3-2] I told the team we needed to be more patient, and that’s when we started to pass the ball around more.”

Unionville had a quick blast of offense just before halftime, scoring three goals (by Garvey, attack Hannah Close and midfielder Veronica Hineman) in the final 1:26 of the first half to give the visitors an 8-4 halftime lead.

The Indians’ attack continued after halftime, as attack Emma Malone scored her second goal of the game 44 seconds into the second half, then Garvey tallied her fifth goal of the game three minutes later, as the visitors took a 10-4 with 21:09 to play.

Garvey’s goal was the last score the Indians made Friday, as the Hurricanes held Unionville scoreless for the final 21 minutes.

“I thought our defense as a whole did very well today,” said Mongan.

Neither team scored for the next nine minutes. With 12:30 to go, Unionville still held a 10-4 lead, but within the space of the next three minutes, Villa Maria seniors Audrey Fantazzia and Annina Iacobucci each scored their second goal of the game to make it 10-6. Fantazzia’s third goal of the game made it 10-7 with 7:42 left.

“Audrey and Adele [Iacobucci] are real workhorses for us in the midfield, they’re game-changers,” said Mongan. “And Annina is a great leader for us at attack.”

While Villa Maria was slowly chipping away at Unionville’s lead, Hurricane junior goalie Maddie Medve continued to make key saves, and finished with seven stops for the contest.

“Maddie came up with big saves when we needed them today,” said Mongan.

With an assist from Annina Iacobucci, Villa Maria sophomore Sarah Delaney scored her second goal of the game with 3:39 left to make it 10-8, then Hurricane junior Erin Finley tallied with 1:42 left to make it 10-9, but the scoring ended there. The game ended with Unionville controlling the ball down at Villa Maria’s end.

Burke said, “We did a good job handling Villa’s [defensive] pressure, with our defenders getting the ball up to midfield. And Allie Ward handled the crease well.”

Mongan, who was heading to a wedding rehearsal dinner for her sister Meggie after the game (both Mongans are Villa Maria grads, Meggie in 2006, Allie in 2008), said, “Our performance today really gives us encouragement going into our last two regular-season games [against Downingtown West and Springfield] and the [district] playoffs.”