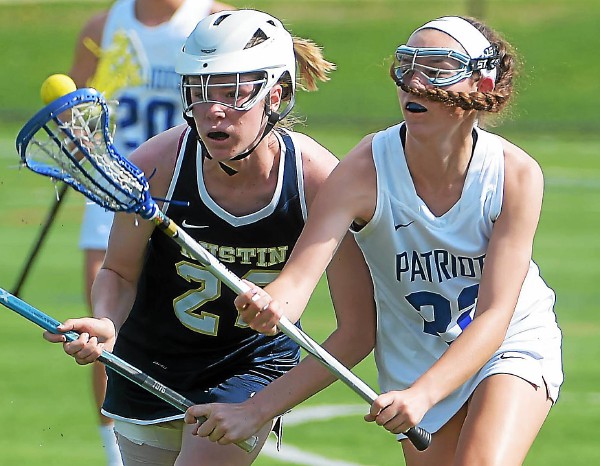 East Whiteland >> Minutes after Great Valley defeated West Chester Rustin, 17-12, in a Ches-Mont League showdown Thursday, senior midfielder and co-captain Natalie Kahn (four goals, four assists) reflected on the late second-half rally by the host Patriots (7-2, 5-0) that decided the game.
“We have a team saying, ‘ATL – Above The Line,’” said Kahn. “It means to keep your head in the game. It was getting hot in the second half, and we were getting tired, but we settled down on defense [later] in the second half.”

To view a photo gallery from this game click here
Both teams entered Thursday’s game unbeaten in the Ches-Mont League, and Rustin had a superior overall record (8-1) heading into the contest, with their only loss to Strath Haven. Every time Great Valley took a lead Thursday, Rustin kept coming back to tie it up, and with 14:14 left, the Golden Knights took their first lead of the game, 11-10.
“We knew Rustin was a different [better] team this year,” said Great Valley senior midfielder and co-captain Olivia Muscella, who led all scorers with eight goals. “We got a little frazzled in the middle of the game, but then we started taking care of the attack and made some big stops on defense.”
After Rustin went ahead 11-10, the Patriots held the Golden Knights scoreless for the next eight minutes while scoring five goals of their own (three by Muscella) to go ahead 15-11.
The high-scoring Muscella, who tallied seven goals in an 18-6 win against West Chester East Tuesday, also had 14 draw controls Thursday, contributing to the Patriots’ 21-10 advantage in draw controls against the Golden Knights.
Muscella teamed up with fellow co-captain Kahn for five of the Patriots’ first six goals, as the hosts roared to a 6-2 lead with 11:33 to go before halftime.
“I’ve been playing with [Kahn] a long time, since we were fourth graders,” said Muscella. “We played together in the Great Chester Valley lacrosse program, and in middle school.”
Rustin, trailing 6-2, rallied for two goals in the space of a minute by junior midfielder Tina St. Clair. Rustin sophomore attack Ashley Chisholm also chipped in with a couple of goals, the latter with 1:22 left before halftime, to tie the score at the half, 8-8.
Early in the second half, Rustin freshman midfielder Jess Ciarrocchi tallied a couple of goals to keep the Golden Knights even with the host Patriots, 10-10, with 15:21 to play.
“Ciarrochi’s a dynamite player with great speed and strength,” noted Rustin head coach Mike St. Clair.
One minute after Ciarrocchi’s second goal, Chisholm scored her third goal of the game (with an assist by senior midfielder Skyler Demis) that gave the Golden Knights their first lead of the contest, 11-10.
Great Valley then went off on its 5-0 run, holding Rustin scoreless for eight minutes and forcing a couple of key turnovers by the Golden Knights.
“Our anticipation and defense and effort at midfield were much better in the second half,” said Great Valley head coach Kim Wenger. “We had a defensive lapse after going ahead [6-2], and it didn’t look like us. I’m proud that we snapped back.
“Olivia [Muscella] and Maggie [junior defender Maggie Flynn] each had a couple of key interceptions, and [junior defender] Lauren Liebesman had some good runs to midfield – she is so consistent in the way she does her job. This win was a tribute to our entire team.”
Also pitching in offensively for the winning hosts was sophomore midfielder/attack Sarah Karwoski, who finished with four goals.
For Rustin, Chisholm and Ciarrochi each had a hat trick, and goalie Maddi Montebianco made 13 saves against the persistent Great Valley attack.
Mike St. Clair said, “I thought it was a very good game, we battled really hard against a very good team. Our players are working hard, and there’s plenty of season left.”