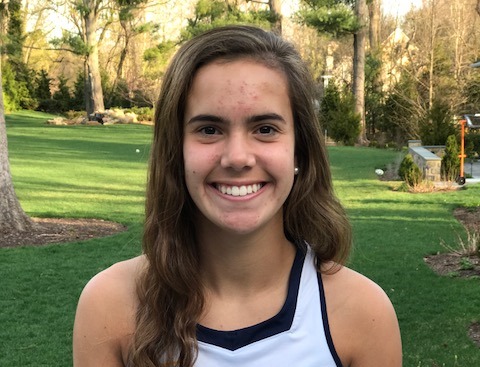 The junior ​midfielder, a Princeton commit, is a four-year starter and was a first team All-Inter-Ac selection as an eighth grader and as a freshman. She was named the Pennsylvania Area Schoolgirls Lacrosse Association (PASLA) Rookie of the Year in 2015 as a freshman. Last year, she received All-Main Line and All-InterAc honors as the Owls captured their third consecutive InterAc title and were PAISAA runner-ups. Agnes Irwin head coach Jen Duckenfield said, “Riri is the complete team player, steadies the attack, anchors the defense and does all the work in the midfield that wins games.”

Q: During spring break, Agnes Irwin defeated the No. 4 team in the country, Good Counsel. What is your most vivid memory of that game – can you share it with us?

A: My most vivid memory was how the defense (including our goalie Haley Andress) came together to help our team to a 12-6 lead at one point in the game. I was just so proud of how our team played.

Q: How do you see your leadership role, both on offense and on defense, as a midfielder?

A: I consider myself to be a “team first” player, so I will do whatever my coaches tell me to do and whatever my team needs me to do.  I have been a starter on the defensive end since eighth grade and I feel like I understand Coach Duck, Coach Maggie and Coach Summer’s defensive sets pretty well. I guess they look to me as someone who they can rely on in the defensive end.  In the attack, sometimes we are not patient as a team and my role is to settle things down a bit making sure that we run through our plays and also to go to goal when I have the opportunity.

Q: Last year, Agnes Irwin was the Inter-Ac champions and PAISAA runner-up. What is your most vivid memory of last season – can you share it with us? If it was a particularly play, can you describe how the play developed and your role in it?

A: My most vivid memories of last season were my Agnes Irwin team winning its third consecutive Inter-Ac championship and my sister Laura becoming the all-time leading point scorer at Agnes Irwin.

Q: You had 112 career ground balls coming into this season. What (in your opinion) has been the key to your success in recovering ground balls?

Q: What are your most vivid memories of last year’s Katie Samson Foundation Lacrosse Festival? What does it mean to you to play in the KSF Festival? Have you ever met Katie Samson?

A: My most vivid memories of last year’s game were beating Great Valley convincingly, my sister Laura having the best game of her high school career with seven goals, and being given the opportunity/challenge of marking GV’s best player. I have never met Katie Samson but I love playing in the KSF Festival because it is for such a great cause and many great teams from the area are able to come together and play lacrosse to support it. I hope I am able to meet Katie some time soon to tell her how much I look forward to the festival every year!

Q: Have you always played midfielder? What originally led you to that position?

A: I played midfield when I was younger but in eighth grade I started to become more focused on defense. This year I am playing more midfield again and love it. I have always been a pretty active kid, so I think that playing all over the field first drew me to that position.

Q: You wear uniform jersey No. 24 for Agnes Irwin. Was there a reason you chose this number – does it have any significance to you?

A: My sister Laura was No. 34, so 24 seemed like a fitting number since I am her younger sister and the second youngest out of four girls, hence the 24. It’s also double my birth date, May 12.

A: That’s a tough one because it seems like bragging, but I think that the best part of my game is probably my leadership and my ability to help anchor the defense.

As to what I am working on most currently, I am always thinking about ways to improve my game in every aspect, but I am especially focused on playing to my full potential on the attacking end.

A: Coach Duck has taught me a lot including how to improve on many fundamentals of the game and how to have grit and fight for balls all over the field. She also helped me to love playing defense (along with Coaches Maggie and Summer). Coach Duck has been my lacrosse coach for so many years and is an important reason for any success I have had on the lacrosse field.

My dad always told me that moving my feet was the most important part of defense in any sport. I believe that my dad telling me this is the primary reason for why I have been able to successfully mark players on defense. He also gave me the confidence that one day, if I worked hard, I could be an excellent lacrosse player.

Q: What attracted you to Princeton? What other schools were in the running? What do you think you’d like to major in at Princeton? Is there a career path that particularly interests you at the present time?

A: Ever since I was a young girl, I dreamed of going to an Ivy League university. A great education and a great lacrosse program at Princeton attracted me instantly. After my visits to Princeton, I knew it was the right school for me. I loved the coaches there as well! On top of this, being able to one day play with my sisters Laura and Natalie is an added bonus.

Other schools that were in the running were Cornell, North Carolina, Duke, Johns Hopkins and Columbia.

I’d really like to be a lawyer, like my dad, therefore I am thinking about majoring in Political Science.

Q: What extracurricular activities are you involved in at Agnes Irwin other than lacrosse? What sparked your interest in these activities?

A: I am an editor of the yearbook. During my freshman year when I was deciding on what club to join, I stumbled upon yearbook and loved it. My advisor and faculty head of yearbook, Ms. Brittingham, has been amazing. I have been a major contributor ever since.

Person I most admire: “Abraham Lincoln – a great leader in the face of incredible adversity.”