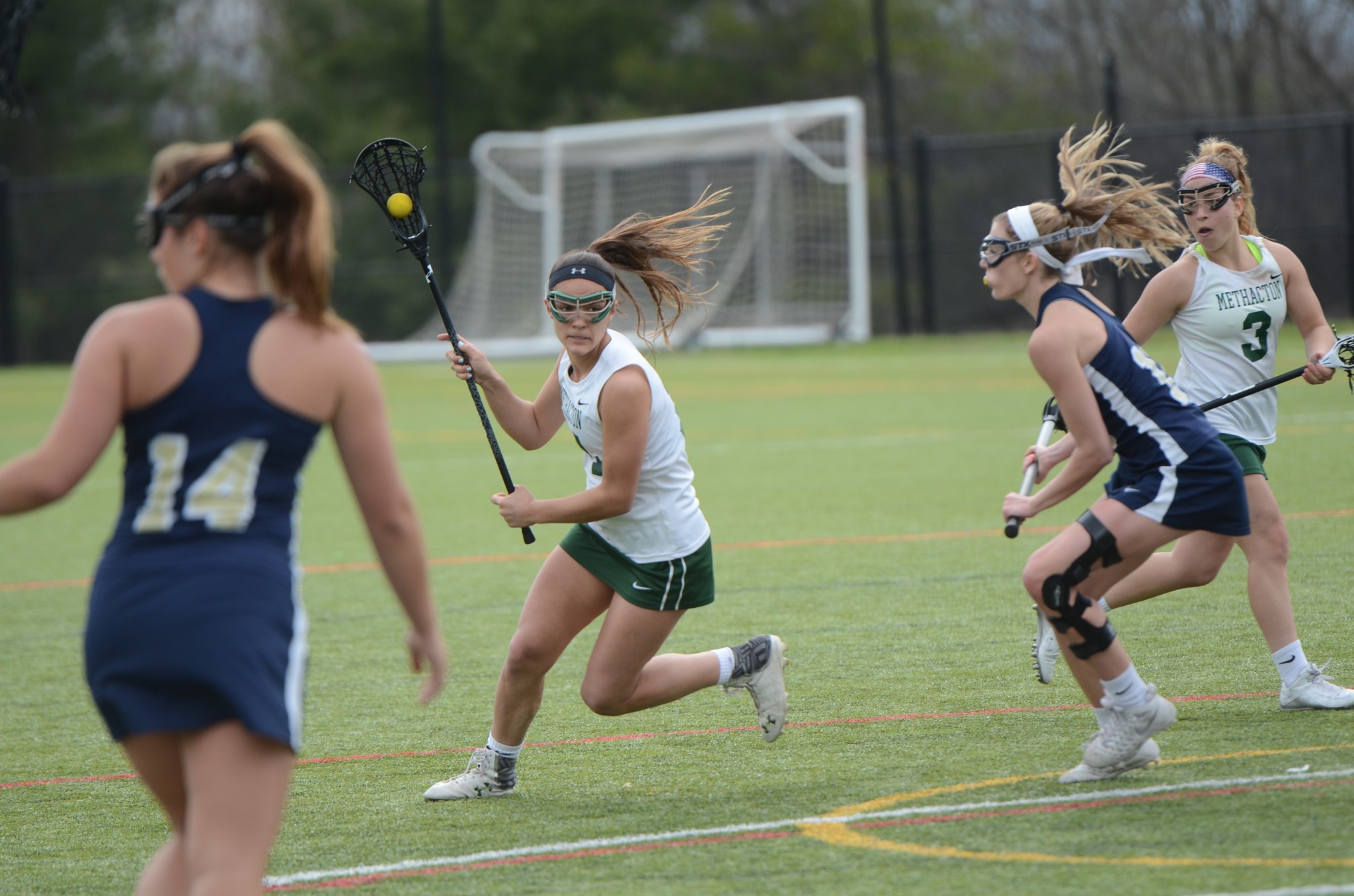 FAIRVIEW VILLAGE >> Another slow start was followed by a flurry for a finish.

Daria Lucchesi paced the offense with four goals while Alana Cardaci and Julie Byrne’s hat tricks supplemented a brilliant performance in goal by Rachel O’Toole as the Warriors overcame an early deficit en route to a 17-12 victory over Spring-Ford Monday afternoon.

The win is the Warriors’ (2-0 PAC, 3-1 overall) second straight. This one, coming on the heels of their 15-13 victory over Boyertown, may be even more impressive. The Warriors fell behind 6-1 in the opening six minutes before taking control late in the half, scoring four goals off free positions in the final 2:35 (three goals in final minute). They then took control in the second half by scoring the first four goals in the half before relying on key saves from O’Toole and clock killing possessions late.

Spring-Ford’s Jill Quigley can’t get a shot off as she’s surrounded by a host of Methacton defenders in the first half. (Sam Stewart – Digital First Media)

“We’ve been slow off the gun,” Markle said. “We have to do something in warmups to get our defense ready. This was the second game in a row that we dug ourselves into a hole. Fortunately we’ve been able to dig ourselves out.”

“It shows that we never gave up,” O’Toole said. “We were down by five and we kept fighting to get back into it.”

O’Toole finished with 12 saves in the win, her stops late in the game on chances stemming from Spring-Ford draw-control wins a game changer.

“She’s going to be outstanding,” Markle said of O’Toole, a freshman. “It’s really, really nice having her.”

“She’s such an active goalie,” senior Jackie Cerchio said. “She’s always chasing the ball and going after it when no one was back there.”

Spring-Ford’s Camryn Jones led the Rams with four goals while Liv Yeagle, Mae Doyle and Lauren Mensch each contributed two-goal games. The Rams built a 6-1 lead in the first seven minutes, using quick cutting plays in front of the net to do so. However, Methacton’s four goals in the final two minutes of the first half swung the game in Warriors’ favor.

Byrne started the second half off with a quick strike in front of the net after hauling in a pass from Aubrey Hazlett (two goals, three assists) to make it 8-8 just 23 seconds in. Thirty seconds later, Hazlett then provided another helper as she chased down a groundball behind the net and found Cardaci in front who then found twine to make it 9-8. Anna Price (two goals, two assists) then struck two minutes later to make it 10-8 before Hazlett got into the scoring column with a hard bouncer past the SF goalie to make it 11-8 with 21:34 left. Hazlett then capped her scoring day seven minutes later, finding Price along the near post, who then finished to make it 15-10.

“I was really ready to go this year,” Hazlett said. “I worked hard in the offseason and it’s starting to pay off.”