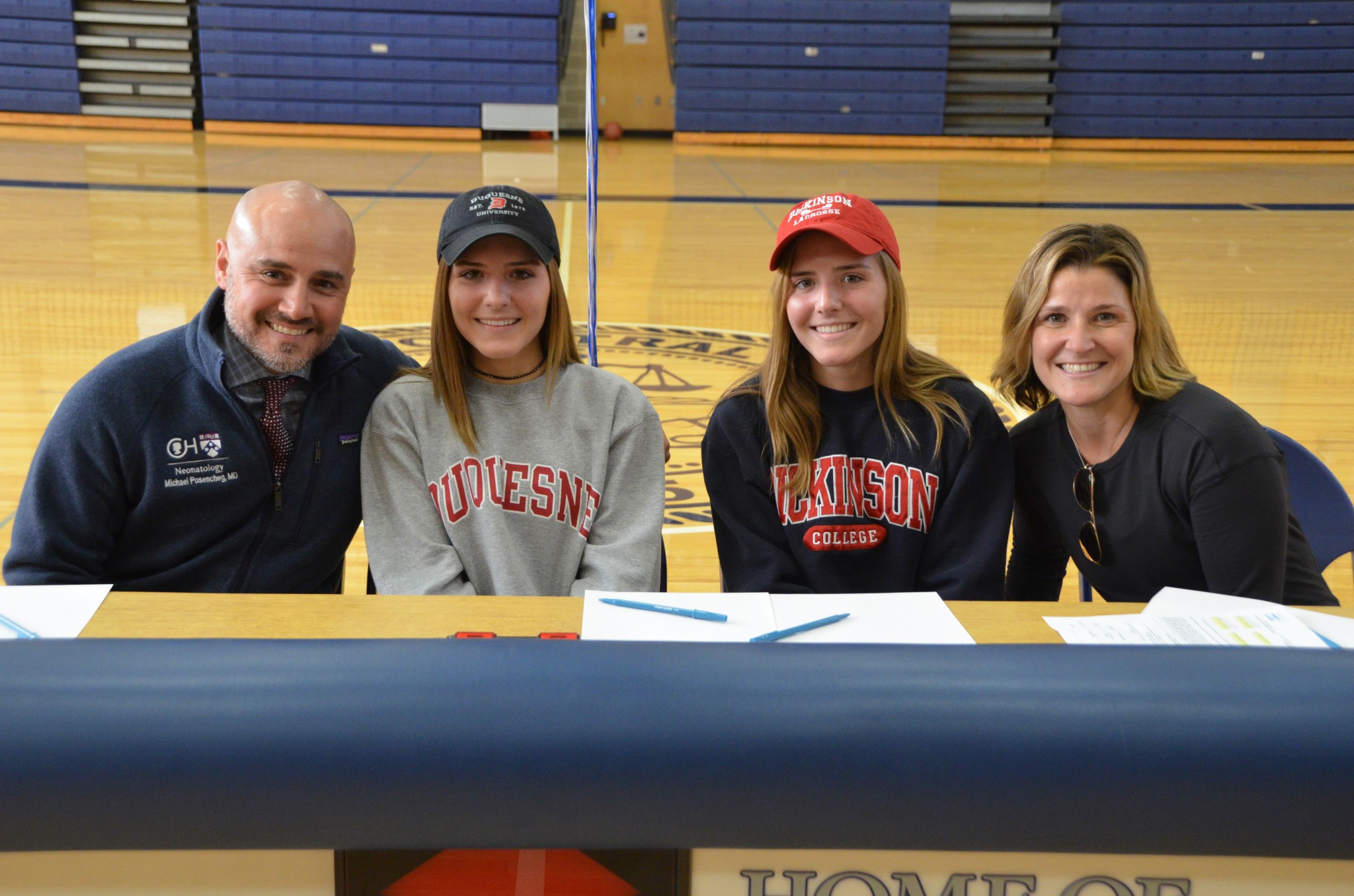 Wynnewood – Hayden and Hannah Posencheg have celebrated many special occasions throughout their career at Friends’ Central on and off the lacrosse field.
The twin sisters recently shared the moment of a lifetime when Hayden signed her National Letter of Intent to play lacrosse at Duquesne University and Hannah signed her letter of commitment to play lacrosse at Dickinson College.
“It’s very exciting,” said Hayden, who plans to major in business at Duquesne at the Palumbo Donahue School of Business. “I have been looking forward to this all year and after I was accepted it made it seem real.”
Hannah, who is unsure about her major but has thoughts on whether to study journalism or law, added, “I definitely worked hard during my high school career in lacrosse. To see it translate into a future opportunity to play lacrosse in college is pretty cool.”
Throughout their career at Friends’ Central, Hannah and Hayden have played an integral role in the rise of the Phoenix that culminated with success on the individual and team level.
Team success has included winning the PAISSA (Pennsylvania Independent Schools Athletic Association) Lacrosse championship in 2014 followed by back–to-back Friends’ Schools League titles in 2015 and 2016.
Individually, Hannah earned second team All-Main Line honors in 2016 and first team All-Friends Schools League honors in 2016 while Hayden received All-Main Line and All-Friends Schools League honorable mention in 2016.
“Hannah is a standout defender, and a faceguard specialist,” said former Friends’ Central girl’s lacrosse coach Lauren Becker Rubin. “She was always matched up with the other team’s top scoring threat and consistently shut them down. Hannah has tremendous speed and athleticism, and she was critical in defensive transition stopping the other team’s fast break. Hannah leads by example, has an incredible work ethic and quietly, but effectively gets it done.”
Becker-Rubin added, “Hayden is an explosive midfielder always finding a way to make a contribution. She has been key to our midfield transition, and relentless in re-defense. Hayden was a huge part of our attacking unit, she works incredibly hard off ball, setting picks, distracting defenders and setting up plays. Hayden made a huge impact in our midfield with her tremendous speed and aggressive play on the ball.”
Since they were very young, Hayden and Hannah have been basically inseparable despite their subtle differences.
They began soccer at a young age and in third grade the pair were introduced to lacrosse. Their introduction to lacrosse came through Haverford Township Recreation.
As they continued to grow, their passion for soccer began to fade even though they played club soccer while their thirst for lacrosse grew with each passing day.
During their sophomore year, Hayden and Hannah made the difficult decision to give up club soccer and focus on lacrosse.
“It was a difficult decision for me,” said Hayden. “I love the individual and team aspect of lacrosse and the fact it’s quicker. I fell in love with the game.”
Hannah added, “For me the time commitment for both club sports took their toll and I had to make a choice, ultimately choosing to pursue lacrosse over soccer.”
In seventh grade, the twins took their lacrosse game to the next level, when they left Haverford Township Recreation to play club lacrosse for Philly Blast under the guidance of coach Josie Ferri.
Their senior lacrosse season will provide challenges on and off the field. On the field the Phoenix will prepare to defend their FSL title; and off the field Hayden and Hannah will be preparing to do something they have never done – prepare to attend different schools.
“We are very close and the longest we have been apart has been two weeks when we each took a trip with our dad,” said Hayden. “I am going to miss not being with her every day but we always decided that college would be the best time to split up for school.”
Hannah added, “We were looking for different requirements and twins have to separate at some point. We thought college would be a good time for that.”
While they enjoy the final months together in high school before they go on a new journey, Hayden and Hannah are looking to make the most of their time and hopefully end their high school career on a high note.
Becker Rubin said, “Hannah and Hayden have been an integral part of the Friends’ Central lacrosse program from the day they arrived in ninth grade. While both share some of the same qualities, an incredible work ethic, blazing speed, tremendous athleticism and an all-out aggressive style of play, they also are different in many ways.
“Hannah plays with a quiet intensity. She holds herself to a very high standard, and pushes herself hard from the inside, at all times pursuing perfection. She knows her role, and continuously tries to do that well. This has earned her the respect of her teammates, and she leads by example.
“Hayden’s style of play is more loose, creative, and loud. She tries things, is not afraid to take risks to make something happen, and recovers quicker from her mistakes. Hayden looks for ways that she can make an impact. She is willing to take on different roles from game to game, but is always going 100 percent, finding a way to make a difference. Hayden is a very unselfish player and her contributions are valued by her teammates.”