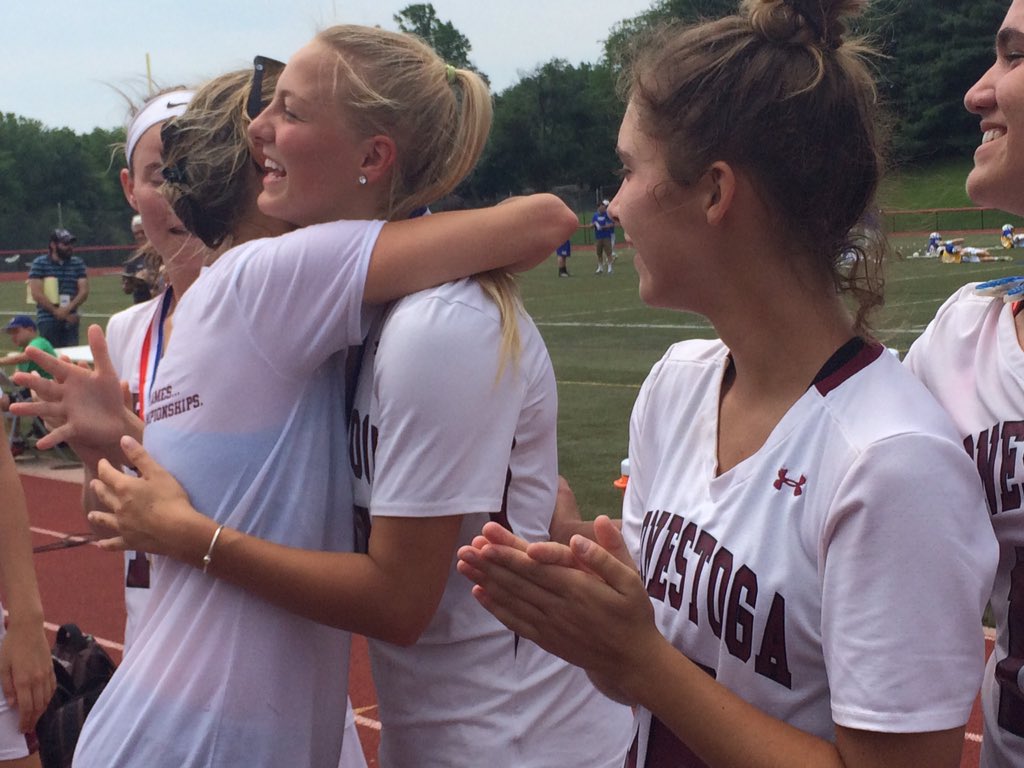 WEST GOSHEN >> Coming to the realization she wasn’t going to take the field with Conestoga in her junior season was hard for Scottie Growney.
Growney was a star of stars in Conestoga’s pulverizing attack last year, finishing third on the team with 57 goals and 30 assists. She felt the pain of her team blowing a second-half lead in last year’s state championship game loss to Garnet Valley.
Turns out that pain was nowhere near the one Growney felt in her ACL, sidelining her for all of this season.
“There were little moments I thought I’d be able to go out,” Growney said. “Once I realized playing wasn’t happening, I changed my whole attitude on how this season was going to go. I made it important to stay positive and try to help this team in every way.
“Even though I’m not a main contributor, I wanted to help them off the field with all the little things. I had my ups and downs, but I couldn’t ask for anything more.”
As Conestoga hoisted the PIAA championship trophy after a dominant 18-7 victory over Radnor Saturday morning, many of Growney’s teammates pushed her to be in the center of the moment. They wanted Growney to celebrate with a trophy she helped earn.

Liz Scott was the first to hug Growney the moment Conestoga sealed its state championship fate. Not known for shedding tears, Scott was close to breaking down after seeing all Growney went through in her rehab this season.
She wanted to win that title for her classmate, teammate and friend.
“Every time I stepped on that field, I played for Scottie,” Scott said. “Scottie is one of the most passionate people on this team. She is a leader and the glue to what keeps us together. We were going to play for her.
“If I could have, I would have worn her number out there today. She deserves this more than anyone.”
Conestoga head coach Amy Orcutt couldn’t stop smiling once the final horn sounded. That enormous smile somehow got bigger once she presented Growney with her state championship gold medal.
It was one of many moments Orcutt will never forget on the pinnacle of her seven year tenure at Conestoga.
“That was a real emotional moment for me,” Orcutt said. “Scottie won one of my coaches awards this year. She has been at every single practice from warming up goalies to working with Liz on the draw. She’s been another coach for us.
“It’s been great for her and all the other girls who were injured to win this title. We played for her and Maddi Little, another one out with a season-ending injury. That’s what made this title extra special, not just for the girls on the field but the ones off it too. They all found a way to contribute.”
Monica Borzillo experienced first-hand what Growney, the player-coach, meant to her. Not only did Borzillo have a game to remember with four goals and eight assists, but capped a season for the ages as she finished with 79 and 108, giving her 187 points on the year.
She owed a few of those to Growney.
“Scottie’s IQ of this sport has been so clutch for us,” Borzillo said. “Her being there on the sidelines telling us exactly what we are doing has been huge. She’s really kept everything positive and focusing on getting us wins.”
ACL injury or not, Growney made sure she was the first player to join her teammates in the championship celebration as the game clock hit zero. Despite not playing a minute this season, she was part of bringing that first PIAA title to Conestoga.
Growney helped her team win a state championship on the sidelines. Her teammates made sure they returned the favor on the field.
“This is just the icing on the cake,” Growney said. “This team is so special. We have an amazing group of girls who played their heart out all season. I can’t even put it into words on how much this means for us.
“I miss playing with them so much, but it’s great being on the sidelines and able to watch and help them. It couldn’t have ended any better.”