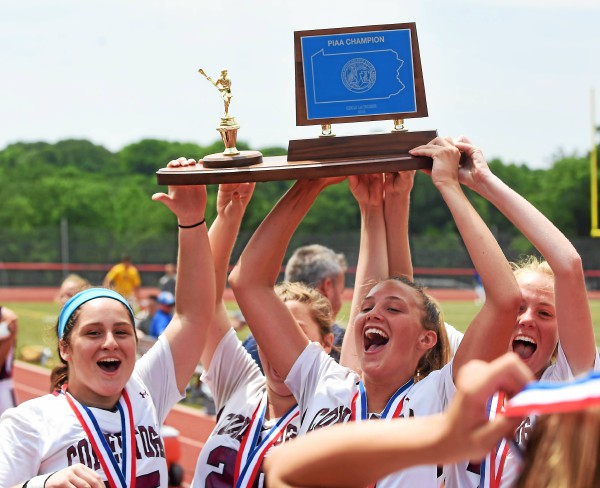 West Goshen – It was fitting that in the final game of her record-setting Conestoga lacrosse career, Monica Borzillo came through like a champion.

Dishing out eight assists and scoring four goals, Borzillo led the Pioneers’ offense in its 18-7 championship-game victory against a stellar Radnor defense that had frustrated opponents all season long.

Minutes after the game, Borzillo, who finished with a school-record 109 assists this season, said, “I am beyond happy, excited and emotional. I felt like nothing could go wrong for us today.”

Last year, in the PIAA state championship game, Conestoga lost an early lead, and the game, to defending champion Garnet Valley. Saturday, the Pioneers slowly built a 10-3 halftime lead and kept adding to it.

“Waking up [a few hours] before the game, I didn’t feel upset or nervous at all,” said Borzillo. “I just felt like, ‘We’re gonna win, we’re gonna win.’”

Conestoga head coach Amy Orcutt said, “This was a great ending to a great career for Monica – she’s been great all season long, and today she never let up.”

Borzillo wasn’t satisfied even after Hannah Ashton scored with nine seconds left before halftime to give Conestoga a comfortable 9-3 lead.

“When Hannah scored, I was thinking, ‘One more, one more, let’s get one more goal before halftime,’” said Borzillo.

A few seconds later, Borzillo came through with a great pass to Rilee Scott, who fired it in for another Pioneer goal just as the half ended.

Borzillo didn’t let up on the defensive end either. With Conestoga leading 16-6, the University of Cincinnati-bound attacker intercepted a Radnor pass and drove in for a score.

To Borzillo, who tallied 78 goals, 25 draws and 36 caused turnovers this season, it was all part of a day’s work.

“No one scoring play [in today’s game] really sticks out in my memory – a goal is just one play, and I kept my head focused – focused on winning the game,” said Borzillo.

Orcutt said, “I couldn’t be prouder of Monica, or of the team. We talked all week about being focused when things aren’t going our way. Today we were all 100 percent focused and resilient.”

Borzillo sees her record-setting assist total as a matter of trusting her teammates.

“I have faith that my teammates can score,” Borzillo said, “There was one play in the second half, when I was behind the goal, and a passed it to Paige Loose, who was completely marked outside the 8. But she did a great job, and scored.”

Borzillo has not always been an attacker. She was a midfielder until her sophomore year at Conestoga.

“The summer before sophomore year, my Phantastix (club team) coaches moved me to attack and I learned what it takes to be an attacker,” said Borzillo. “The most important attribute of a good attacker is their patience, game IQ, and knowing their position inside and out – from working to find the perfect shot to re-defending.

“The most important thing [the Phantastix coaches] taught was player IQ. You can tell when a player has it.

“[Fans] see that we [Conestoga] take our time when we’re setting up a play, but we’re out there thinking, and we’re well aware of what’s going on out on the field.”

Borzillo added that the Pioneers were quick to help each other this season.

“We have a catchphrase, ‘Hold the rope,’ that we started after our [regular-season] win against Radnor,” said Borzillo. “It means holding your teammates up, helping them out, when they might be physically tired or mentally beat-up.”

Favorite TV show: How I Met Your Mother.

Person I most admire: “My Dad has played the biggest role in my career from start to finish. We are very close.”