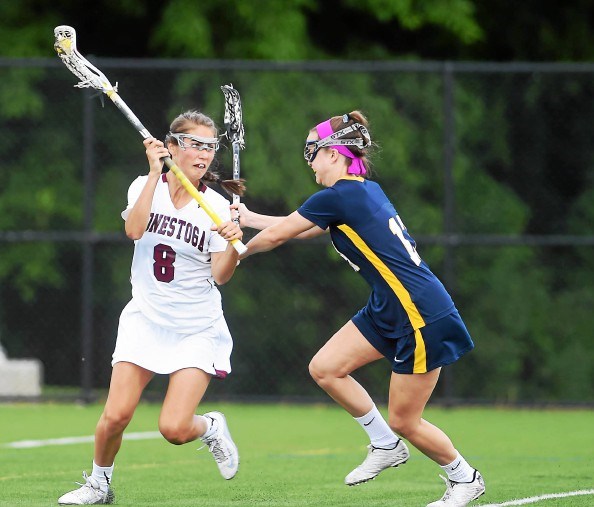 Silver Spring >> Conestoga senior Monica Borzillo, headed to her high school graduation ceremony just a few hours after the Pioneers rolled past Mount Lebanon, 20-5, in the PIAA Girls’ Lacrosse Championships semifinals Tuesday afternoon, said, “Honestly, I feel right now like I’d rather stay with my team [tonight]. There were so many contributors today – this was an awesome win. There’s been so much stuff going on this year for us.”

Borzillo scored three goals and dished out eight assists in the semifinal held at Cumberland Valley High School, including her 100th assist of the season. Earlier this season, she set the school record for career assists.

“Assists are like a team award,” said Borzillo. “You need your teammates coming through to get your assists.”

Conestoga senior Sondra Dickey, who scored four goals, added, “Monica and I have played together on every team since we were in third grade. When we play [the championship final] on Saturday, this will be our last game together. I think on Saturday, our team will let it all out on the field, giving it full force and not letting up.

“I think we’ve played every game this season like it’s the state championship.”

Earlier this season, Conestoga head coach Amy Orcutt said, “I think this team is unique …. They all get along and have a lot of fun together. They are always laughing and dancing and having a good time together. We play music at practice during warmup and I think it relaxes them.”

Conestoga came out on fire in Tuesday’s state semifinal, jumping out to a 13-2 halftime lead. After the game, as the Pioneers headed for the team bus, the other PIAA state semifinal (Radnor vs. Conestoga) was still five hours away from the opening draw. In the other semifinal, Radnor defeated Garnet Valley, 10-9. Radnor handed Conestoga its only loss this season (in the district quarterfinals).

Conestoga head coach Amy Orcutt said, “After losing to Garnet Valley in the finals last year, it feels amazing to be back in the championship final – I feel excited and honored to be back here. …. I think having that one loss to Radnor really helped us re-focus for the rest of the season.”

Both Conestoga seniors are happy their final Pioneer game will be close by. Last year’s PIAA championship final was at Hershey, but Saturday’s final will be held at West Chester East High School.

“Losing in the final to Garnet Valley last year [at Hershey] was the saddest thing,” said Dickey. “I’m kind of excited that this year’s championship final will be held 10 minutes from my home.”

Borzillo added, “When we played [the final] at Hershey last year, it was two hours away and [many of our fans] couldn’t come out to the game.”

When the championship final begins at West Chester East Saturday, Borzillo, Dickey and the rest of their classmates will be newly-minted Conestoga High School graduates. A couple of hours later, they might be newly-minted PIAA state champions.