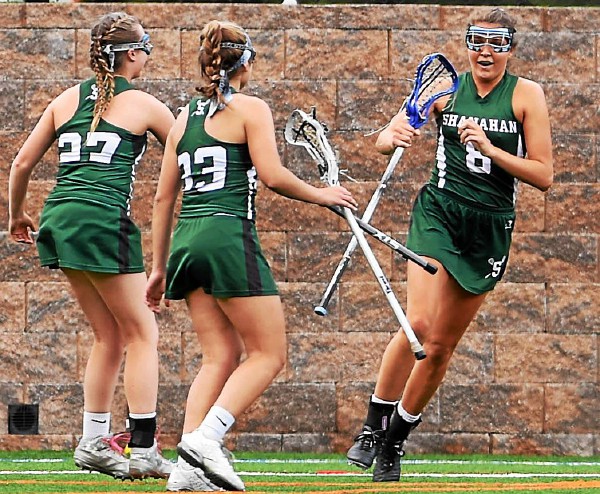 UWCHLAN >> Mary Theresa Corcoran was challenged with one job Thursday — a job many in the Ches-Mont League and District 1 have struggled with this season.
The Bishop Shanahan senior was responsible for face-guarding Tori Barretta, who led the area with 113 goals, throughout the Eagles’ rematch with Downingtown East.
How tough was the task? Barretta scored eight goals against Shanahan in the first meeting between the Ches-Mont rivals on April 7. Corcoran had a strategy the second-time around in the District 1 second-round matchup.
“It’s all comes down to mind games when you’re face-guarding,” Corcoran said. “I just planned to keep a steady head and play lacrosse. Doing the simple things helped and got the opponent frustrated.”
Corcoran led a swarming Shanahan defense throughout the afternoon as the Eagles forced eight turnovers that led to four goals in a 11-7 victory over Downingtown East Thursday.
Shanahan (16-4) extended its school-record winning streak to 15 games in advancing to the district quarterfinals for the first time in school history. The Eagles will play No. 15 Central Bucks West, which upset No. 2 Springfield-Delco, 7-3, at West Chester East Saturday at a time to be determined.

Downingtown East (16-4) had its 14-game win streak snapped with the loss as the Cougars fell in the second round of districts for the second straight year.
Barretta was held to one goal on the afternoon as Corcoran prevented her getting the ball in open space throughout most of the day while winning the majority of draw controls. She had just two shots through the first 34:31 of the game and totaled just four on the day.
“I believe in our defense,” Corcoran said. “They’re going to support the open space. We’re a solid team that comes together in the right moment. The plan was to keep possession of the ball and stay calm on offense by not rushing shots.”

While Shanahan kept that steady head, turnovers doomed East throughout the game. In the final minute of the first half with the Cougars trailing 7-5, Shanahan forced a turnover deep in East territory, which led to a Rylee Hill goal to give the Eagles a 8-5 lead heading into halftime.
Gianna DeCesaris opened the second half by forcing a turnover at midfield that led to Alyssa Manley’s third goal of the game as Shanahan took a commanding 9-5 lead with 22:01 to play.
“We made fundamental mistakes throughout the game,” said Downingtown East head coach Christa Somits. “In critical times during the game, our defense turned the ball over which is something you can’t afford to do in a big game.
“Shanahan showed up today and wanted to win. They took care of the ball and dominated the draw control.”
When East earned opportunities in the shooting lane, the Shanahan defense set up chances for freshman goalie Jess Gorr to make a crucial save. Gorr’s biggest save came when she denied Elise Person from the eight-meter mark with 6:41 left and Shanahan leading 10-7.

The save led to a Shanahan fast break, which resulted in Manley’s fourth goal of the game that gave the Eagles an 11-7 lead with 6:23 to play. Gorr finished with nine saves on the day.
“My defense just kept putting them at a poor angle and I’m glad they did,” Gorr said. “That allowed me to see the ball cleanly. I would be burnt without them.”
The loss sent Downingtown East in disappointment after the Cougars shocked the area last week by claiming the Ches-Mont championship and ending Great Valley’s 55-game league win streak. East is losing just three seniors from the championship squad and will have plenty of contributors back next year.
That list includes Barretta, whose 114 goals were the most in a season since Great Valley’s Brittany Edwards scored 147 and West Chester Henderson’s Katie O’Donnell had 133 in 2014.

“This is a very young team,” Somits said. “This year was a growing experience for us and we’ll work toward building these kids mental focus for these playoff games next time around. That played a role in how we played today.”
Shanahan continues to make history this season as it set a school record for wins along with the district quarterfinal appearance. The Eagles are one win away from the PIAA playoffs, which is another first they like to accomplish.
“We’re making school history again,” Corcoran said. “It’s awesome to be able to get this far. This is a great feeling and I can’t wait to keep it going.”