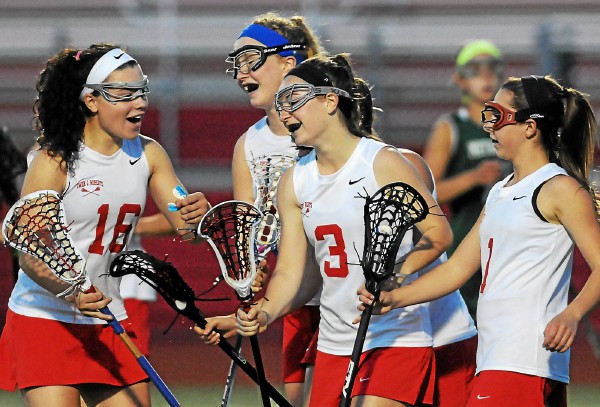 BUCKTOWN >> Talk about being thrown into the fire.

Owen J. Roberts junior Claire Hampton made her varsity debut in goal with the Wildcats as they took on Methacton for the Pioneer Athletic Conference Championship on Thursday night at Henry J. Bernat Field.

And she didn’t disappoint.

With regular starter Sara Maute sidelined due to a concussion, Hampton compiled eight saves on the day, including two huge stops in the final 15 seconds as Owen J. Roberts defeated Methacton, 9-8, for a second consecutive PAC-10 title.

“Sara (Maute) and all the rest of my teammates deserve all the credit,” said Hampton afterward. “They’re the reason we made it here. They’re the ones who won all of our other games during the season.

“I was nervous thinking about this game all day,” she added, “but my teammates had my back. I knew I couldn’t let them down.”

With the final 30 seconds winding down rapidly and OJR clinging to a one-goal lead, the Warriors secured possession and charged downfield toward Hampton in goal. Methacton senior attack Sara Hughes took a pass from Alana Cardaci and fired it right into the stick of Hampton to secure it for OJR.

“Claire stepped up,” said Owen J. Roberts head coach Joe Tornetta. “She did a great job of being in position, especially at the end. She’s worked all year long to be in this spot, and she really came through for us.”

“All day, I knew this game was going to come down to the end,” said Hampton. “If it came down to me, I knew I needed to step up and make a stop.”

The win brought about a similar atmosphere to last year’s PAC-10 title bout between the two teams, where OJR held off Methacton, 11-10, despite the Warriors’ late push in the second half. On Thursday, the Wildcats led 5-1 with 21 minutes left in regulation.

Methacton, though, never backed down.

The Warriors clawed all the way back, eventually taking their first lead of the night at 8-7 when Lauren Hughes scored with just 5:05 left in regulation.

In the end, though, Owen J. Roberts seniors Maddie Gebert and Kerry Huzzard ultimately proved to be the difference.

Just 18 seconds after Lauren Hughes gave Methacton the lead, Gebert answered right back, securing the ball off the draw and taking it the distance to even it up at 8-8.

Nearly a minute later, Huzzard took possession at the 20-yard line, put a spin move on her defender and flicked the ball into the net to give OJR its eventual 9-8 lead at 2:37.

“I honestly don’t remember it,” said Huzzard of her game-winner. “My adrenaline was rushing, so I just charged to goal. I can’t remember where I placed it or what happened — I just remember hearing the crowd and seeing my teammates rushing toward me.”

Huzzard’s name was mistakenly skipped at the announcing of the starting lineups during pregame.

Little did she know, it would be her name called when her team needed it most.

“My teammates trusted me with the game on the line,” she said. “It’s so great to end my senior season that way.”

Though the team didn’t make an undefeated run through the PAC-10 like last year’s squad, Gebert says this year’s team is an even better fixture of last year’s roster.

“We’ve got a lot of experienced players, and we have a lot of younger player with a lot of good speed,” she said. “That’s been huge this year. We’ve been able to stretch the field really well and keep up the transition.”

Now in his second year at the helm of the Wildcats, Thursday’s win may have been one of the most defining during Tornetta’s time at OJR.

“We had some adversity coming into today,” said Tornetta. “Champions face adversity. These kids will be champions in my heart forever. They faced adversity coming into this game — knowing they had a team from Methacton that was hungry for them. They didn’t back down. I couldn’t be more proud of all of these girls for what they’ve accomplished both this season and today.”

The season is far from over for either team.

Methacton is currently ranked at No. 6 in the District 1 seedings while Methacton sits at No. 18.