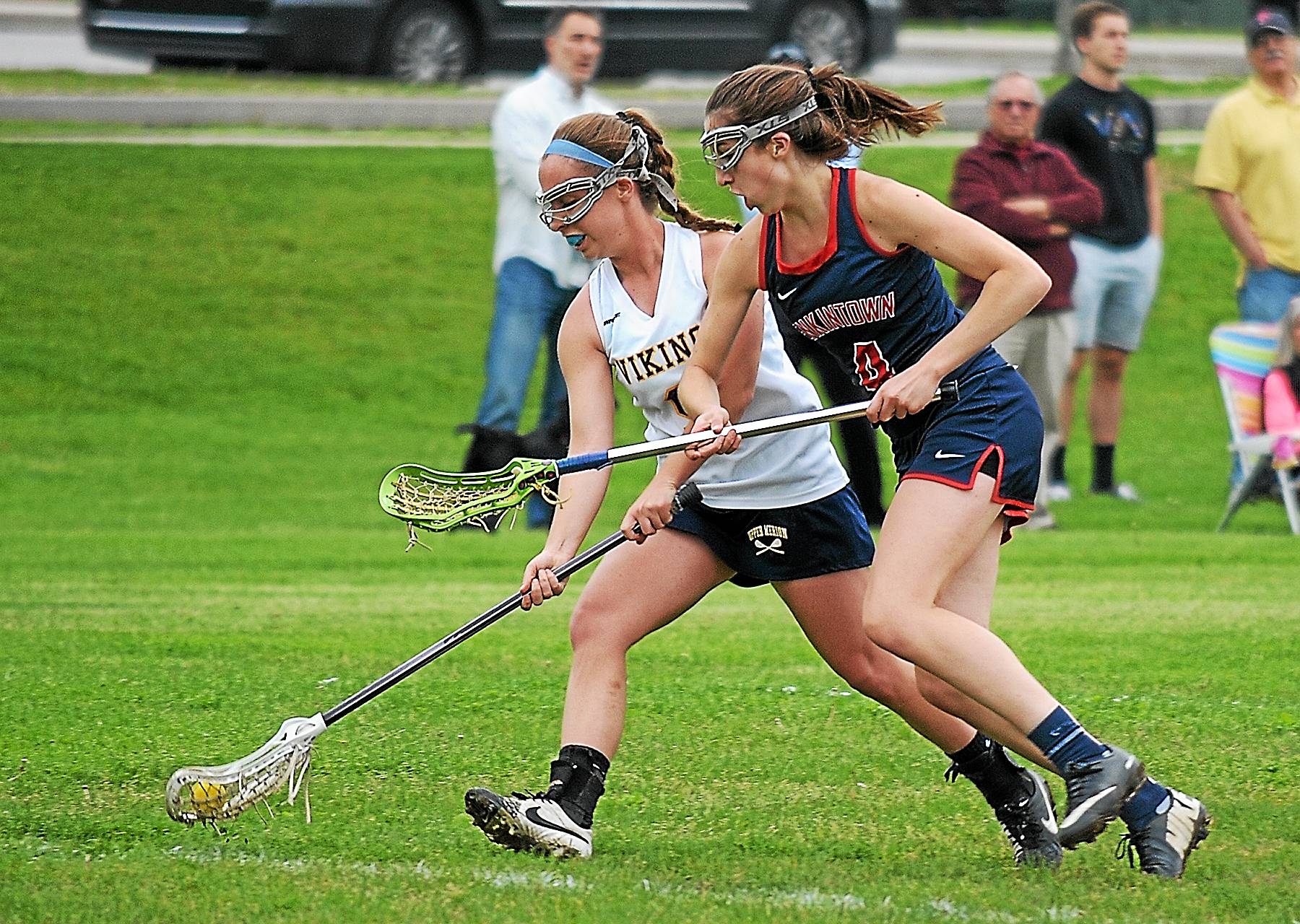 UPPER MERION >> The last week of a scholastic athletic season is bittersweet.

For some, it is the final time they’ll ever play in an organized version of the sport they are taking part in.

For others, it is the last step before donning a college uniform in the same sport next year.

For coaches, it is a time for saying goodbye and assessing the future.

Both Upper Merion and Jenkintown are in the final week of their respective girls lacrosse seasons.

Upper Merion’s Haley O’Malley unleashes a shoots during the Vikings’ game against Jenkintown on Wednesday, May 11, 2016. (Gene Walsh/Digital First Media)

And while Upper Merion downed Jenkintown, 17-3, Wednesday to come within a game of its season drawing to a close (which will happen Thursday evening when the Vikings will host Springfield for Senior Night), the Drakes still have a meeting against Bicentennial Athletic League leader New Hope Thursday.

But with neither side in playoff consideration, the teams’ respective coaches each looked at the contest in different ways.

For Jenkintown head coach Ken Rodoff, it was an opportunity to assess his first season with the Drakes.

Rodoff, who oversaw the fortunes of Springfield-Montco for 15 years, is in his first year trying to make Jenkintown a perennial playoff contender as he once did with the Spartans.

The times are sometimes trying, but Rodoff was very positive about his first season.

“I apologized to my seniors on our first day on the practice field this year,” he said. “I told them they weren’t going to be around to see what this team will ultimately look like.

For Upper Merion, the team’s preseason goal was to find a way into the playoffs. That’s not going to happen. But head coach Angie Yanocha said sometimes falling short with a team that was as fun to coach as this year’s team was enjoyable.

“Looking back, there are things we’d like to do differently,” Yanocha said, “and a couple of teams we’d like to play again. But I’m ending this year with a positive feeling.

“This was a really good group to coach. They played hard together, but they also had a lot of fun together.”

From a competitive standpoint, Wednesday’s game was over early, as the Vikings kicked in the running clock when they ran up an 11-1 lead with 5:00 left in the first half as Haley O’Malley and Francesca Lindelow led the first-half scoring with two goals apiece.

Springfield got goals from Lauren Shenk and Sara Whitney to open the second half, but the Vikings would close the game on a 6-0 run and begin reminiscing about a season that came up short on reaching goals.

“I’m going to miss the people I’ve played with the last four years,” said Anna Davis, who was quick to note that Old Dominion, where she will play lacrosse next year, has qualified for the NCAA tournament for the first time. “We lost some close games we could have won, but I’m happy with our team and happy I got a chance to play with some of these guys since second grade.”

“Like Anna said, it’s disappointing,” added O’Malley. “Some things just didn’t come together. But I had great teammates. We had good relationships and we really connected.

O’Malley is headed to Mary Washington University in Virginia to play lacrosse at the Division III level.

“We’ll be seeing each other this summer when we’re training for college,” O’Malley said. “but it’s definitely going to be weird not seeing everybody every day.”

Which is also a part of the season’s final week.