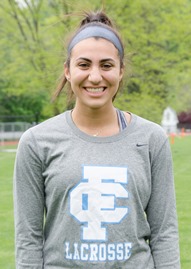 The junior attack has been an outstanding scorer and all-around performer for the Phoenix this season, particularly in the last few weeks as Friends’ Central gained the top seed in the upcoming Friends Schools League girls’ lacrosse tournament. Friends’ Central girls’ lacrosse head coach Lauren Rubin said, “Sophie has been phenomenal in re-defense forcing turnovers, as well as making a huge impact in midfield transition when we have the ball. This year she has become a true on field leader, playing with tremendous presence and playing a big role.”

Q: How do you see your defensive role, as an attack?

A: I think that re-defense is extremely important in lacrosse. If you hustle for everything on re-defense, it opens up opportunities for fast breaks on attack and settled plays. I think that this season I had to step into a new defensive role on re-defensive. Being an attacker, I wasn’t used to this new role on the field, but I understand how important it is for the game in order to be successful.

Q: What (to you) has been the most memorable game of the season to date? Can you share with us your most vivid memory (or play) of that game – if it was a play, can you describe how the play unfolded, and your role in it?

A: The most memorable game this season was our game against Shipley (a 12-9 victory). Shipley has always been a rival and we knew going into it that it would be an intense game. The three best moments I remember from that game were getting a pass from my sister with 10 seconds left and scoring a goal before halftime, adjusting to taking the draw against a very strong player from Shipley and beating her a couple of times to get the ball on our offensive side, and lastly the end of the game when we took control.

Q: You had a fine day for Friends’ Central at the 16th annual KSF Lacrosse Festival. What is your most vivid memory of the Festival that day? What did it mean to you to play in the KSF Festival? Have you ever met Katie Samson?

A: My most vivid memory of the Festival was our game against Haverford High School. We were down many of our key players and a lot of players who don’t usually play as much had to step up. The players who usually start had to have an even bigger role for this game. Everyone put 100 percent effort and hustle into every play. Haverford was a very talented team and with the little team we had, we ended up only losing by one goal in the last seconds. Katie Samson came to our school a few years ago and talked to the team about how active she still is, even after her accident. It really inspired me and it makes me feel so great playing every year in the Festival. The KSF is an amazing cause and it is a great way to see amazing lacrosse.

Q: Have you always played attack? What originally led you to that position? What (to you) is the most important attribute of a good attack?

A: I have always played attack. I played many different positions when I was younger but always turned back to attack. Something that led me to this position is how effective a player can be in a game, whether it is re-defending, scoring, or assisting. I think the most important attribute of a good attack is passing and patience. I am always looking for the one more pass, making things happen for my teammates. Something that is really important is patience. With patience, it is much easier to keep possession of the ball and get an even better opportunity to score. Patience is something that Becker always emphasizes in order to be successful.

Q: You wear uniform No. 37 for Friends’ Central. Was there a reason you chose this number – does this number have any significance to you?

A: My lucky number is 3 so I tried to get something with the number 3 in it. I have always had at least one 3 in any uniform I have for any sport.

A: I think that being left handed is a very big advantage in lacrosse which I use. I think that something that is a good part of my game is catching and shooting under pressure. Especially being left handed, because a lot of defenders struggle with defending a left hander. Another part of my game is that I can get to the goal with a quickness in my first step which is a good skill to have in the game of lacrosse. I also love to look for everyone which is also something I am working on, which is seeing everyone who is open.

A: My biggest lacrosse mentors have definitely been my coach, Lauren Rubin (Becker), and a senior on the team who I have become extremely close with from sports, Avital Schweitzer. Becker has taught me to get rid of any fears I have for the game and play to the full potential I can. She has told me every year that I can do it and it has pushed me to be a better player. Avital has always been there to cheer me up and push me to be my best. I have always looked up to her just because she is such an important leader on our team. She has been someone that I can go to for anything, especially lacrosse. I have developed such an incredible relationship with her and she has taught me how to love the game of lacrosse.

Q: What do you think you’d like to major in at college?

A: I’m not sure what I want to major in but maybe communications or education.

Q: You play basketball for Friends’ Central’s varsity squad, which had a great season last winter. Can you share with us your most vivid memory of the past season?

A: My most vivid memory this past season was winning the Friends’ Schools League championship for the second year in a row. We played Abington Friends, who has always been competition for us. Our team wanted it so badly and everyone stepped up and played with so much heart. It was such an incredible experience, winning something so big.

Q: What extracurricular activities are you involved in at Friends’ Central other than lacrosse and basketball?

A: I play tennis for our varsity team. I am also involved in blood drive and our school newspaper.

Favorite book: Catcher in the Rye.

Persons I most admire: “My parents, Eric and Jessica, because they inspire me to be my best me.”

(In order to be selected Main Line Girls Athlete of the Week, a student-athlete must first be nominated by her coach.)