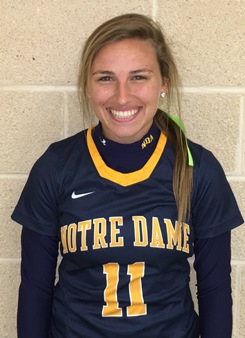 The junior midfielder and co-captain, a first team All-InterAc girls lacrosse selection as a sophomore, is a player whose “hustle and heart are the soul of our team” according to ND head coach Xan Zimatore, who adds “Claire continuously pushes herself every day to be the best player she can be not only to get to the next level individually but make her team better. She is a selfless player who will do anything for her teammates. Every game Claire leads the hustle stats with ground balls, draw controls and caused turnovers, and she is constantly doing the dirty work for our team.” She has committed to University of North Carolina for lacrosse.

Q: What does it mean to you to lead the team in what Coach Zimatore calls the “hustle stat” categories?

A: I believe that each player is vital and has a specific role on the team. My role is to get the ground balls and draw controls and create opportunities for my teammates as well as myself. Coach Zimatore constantly tells me about how important the hustle stats are, because without possession you can’t win.

Q: In your team’s win against Springside, Coach Zimatore mentioned that you were face guarded and their game plan was to take you out of the game – yet you still managed to get six ground balls, four caused turnovers, two draw controls and a goal. What to you was the key moment (or most memorable play) of the game? Can you describe how the play unfolded, and your role in it?

A: The moment I realized I was being face guarded, I knew that I needed to play differently. I was aiming to focus more on my defense.  My mission became to get the ground balls and cause turnovers so that I can get the ball to open teammates. A highlight to my game was when I caused a turnover behind our net and took possession of the ball up the field to our attack, who then scored.

Q: Against Harriton in the 16th annual KSF Lacrosse Festival, you had three goals, three ground balls and a draw control. What is your most vivid memory of the Festival that day? What does it mean to you to play in the KSF Festival? Have you ever met Katie Samson?

A: This KSF Festival game was special because before the game, Leanne Purcell, a senior at Notre Dame who is battling a serious illness, was honored by receiving the Katie Samson Hero award. Leanne is an inspiration to me personally, and to all of Notre Dame. To have her receive the Katie Samson Hero award before the game was emotional for our whole team. I have never met Katie Samson in person but our team watched her video and we were inspired to raise funds for her foundation.

Q: Have you always played midfielder? What originally led you to that position? What (to you) is the most important attribute of a good midfielder?

A: Before playing lacrosse I played AAU basketball.  I officially started playing lacrosse in seventh grade and wasn’t sure what position I wanted to play. I was put in as a defender on my club team and then played midfield on my middle school team. Then in high school I made varsity as a freshman and was first put in as a defender. Later in the season I was moved up to midfield due to the injuries on our team. The most important attribute to a good midfielder is flexibility. A good midfielder needs to be strong on the attack and just as strong on defense. You need to get up and down the field quickly and fight for every ground ball.

Q: You wear No. 11 for Notre Dame. Was there a reason you chose this number – does this number have any significance to you?

A: I first chose No. 11 when I played township soccer as a little girl – it was my mom’s number in sports.  I used it in high school soccer as well.  It just stuck with me.

A: The best part of my game is the ability to come up with ground balls. I am currently working on shots on goal and becoming more of a threat on attack.

A: One of my biggest lacrosse mentors was Courtney Waite, a past defender on North Carolina. She was on her way to play Division III  soccer when Coach Levy saw her at a lacrosse tournament and recruited her.  She became one of the top defenders in the ACC and I was inspired by how she played the game.    My travel coach, Kim Venzie of Southeastern Pennsylvania (SEPA), also inspired me to love the sport of lacrosse. She is a passionate coach and I have learned a lot and have fun playing for her.

Q: What attracted you to University of North Carolina, compared with the other colleges in the running? What do you think you’d like to major in? Is there a career path that particularly interests you at the present time?

A: After going to the 2013 National Championship at Villanova and watching North Carolina against Maryland going into triple overtime, I dreamed of playing on a team like that- a team that never gives up. I went to a lacrosse camp at UNC that summer and fell in love with Chapel Hill.  I am thinking about studying nutrition and global health and UNC has one of the best programs in the country.

Q: What extracurricular activities are you involved in at Academy of Notre Dame other than lacrosse? What sparked your interest in these activities?

A: I also play soccer and run indoor track. I am co-captain of my lacrosse and soccer teams.  I am also a member of student council and Respect Life. I was recently voted as Athletic and Activities President of our school and love helping lead the school in planning special events and activities.  I like to keep busy and in my downtime I love playing the piano.

Person you most admire, and why: “I admire my sister Katie the most, because she has taught me how to get past challenges and to set high goals for myself – she runs the 3000m Steeplechase in track for the University of Maryland.”