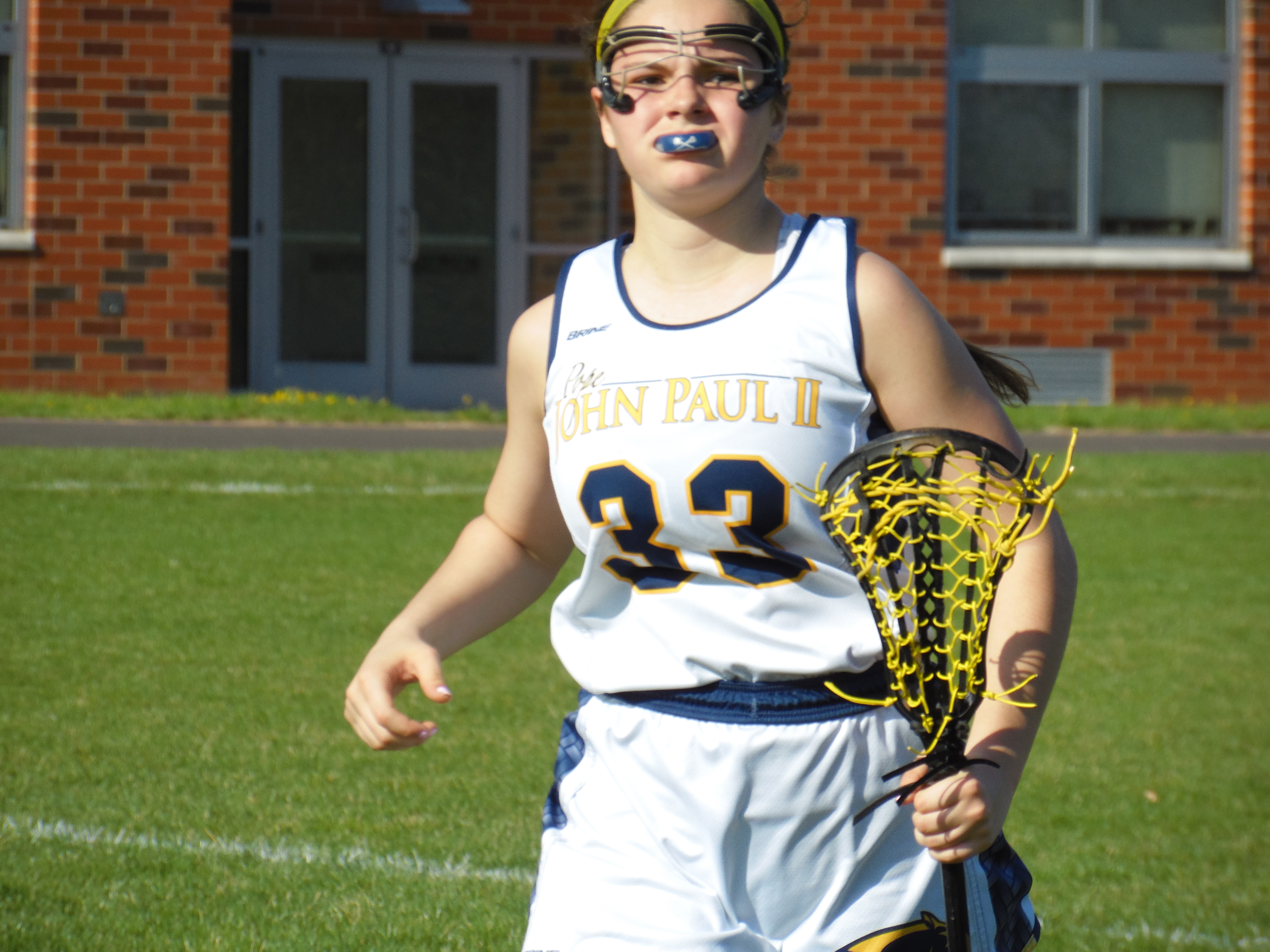 ROYERSFORD >> Admittedly, she didn’t even anticipate her team taking the field Friday.

With the radar calling for severe showers all throughout the day, Pope John Paul II sophomore Monica Rapchinski didn’t bother to pack her uniform for her team’s PAC-10 game against Pottsgrove.

“I was completely expecting the game to be cancelled today,” she admitted with a laugh. “The weather was calling for it to pour all day, so I thought there is no way we’d be able to get it in.”

In the end — while sporting a teammate’s jersey — Rapchinski poured in her second consecutive 10-goal performance, as the Golden Panthers downed Pottsgrove 20-5 shortly before the skies opened up over Pope John Paul II High School.

Off to a 2-0 start, Pope John Paul II head coach Maureen Burger says her team is headed in the right direction.

“It’s good for the girls to get started this way,” said Burger. “We’re looking to establish ourself in the conference, and I think we’ve had a pretty good showing so far.”

Rapchinski’s dime performance comes right on the heels of her 10-goal game against Pottstown on Wednesday. The sophomore scored 14 seconds right off the opening draw Friday and had a hat trick roughly six minutes after the opening whistle.

By the time Pottsgrove scored its opening goal 20 minutes in, PJP held a seven-goal advantage with Rapchinski accounting for four of her team’s goals.

“She’s a very talented player,” said Pottsgrove head coach Kirstin Urie of Rapchinski. “She’s the type of player you’ve got to have marked at all times. I’ve got to give (Pope John Paul II) credit. They played through her and played as a team and really worked the ball all around the field.”

Despite her youth, Burger says Rapchinski has developed into a player that her teammates are able to rely on no matter the situation.

“She’s always been able to finish, it’s just that she’s not a freshman anymore,” said Burger. “She’s got a lot more confidence in herself.

“Our whole team is spread out more,” she added. “We have a lot more threats, which opens up the field for her.”

For Pottsgrove, Brooke Sayloer netted a hat trick while Erin Caroll had a goal and an assist. Courtney Petrucelli scored once while Madison Davis and Emily Williams each added an assist.

NOTES >> Pottsgrove senior Cheyenne Owens was sidelined Friday with injures she sustained during the team’s win over Daniel Boone on Thursday.