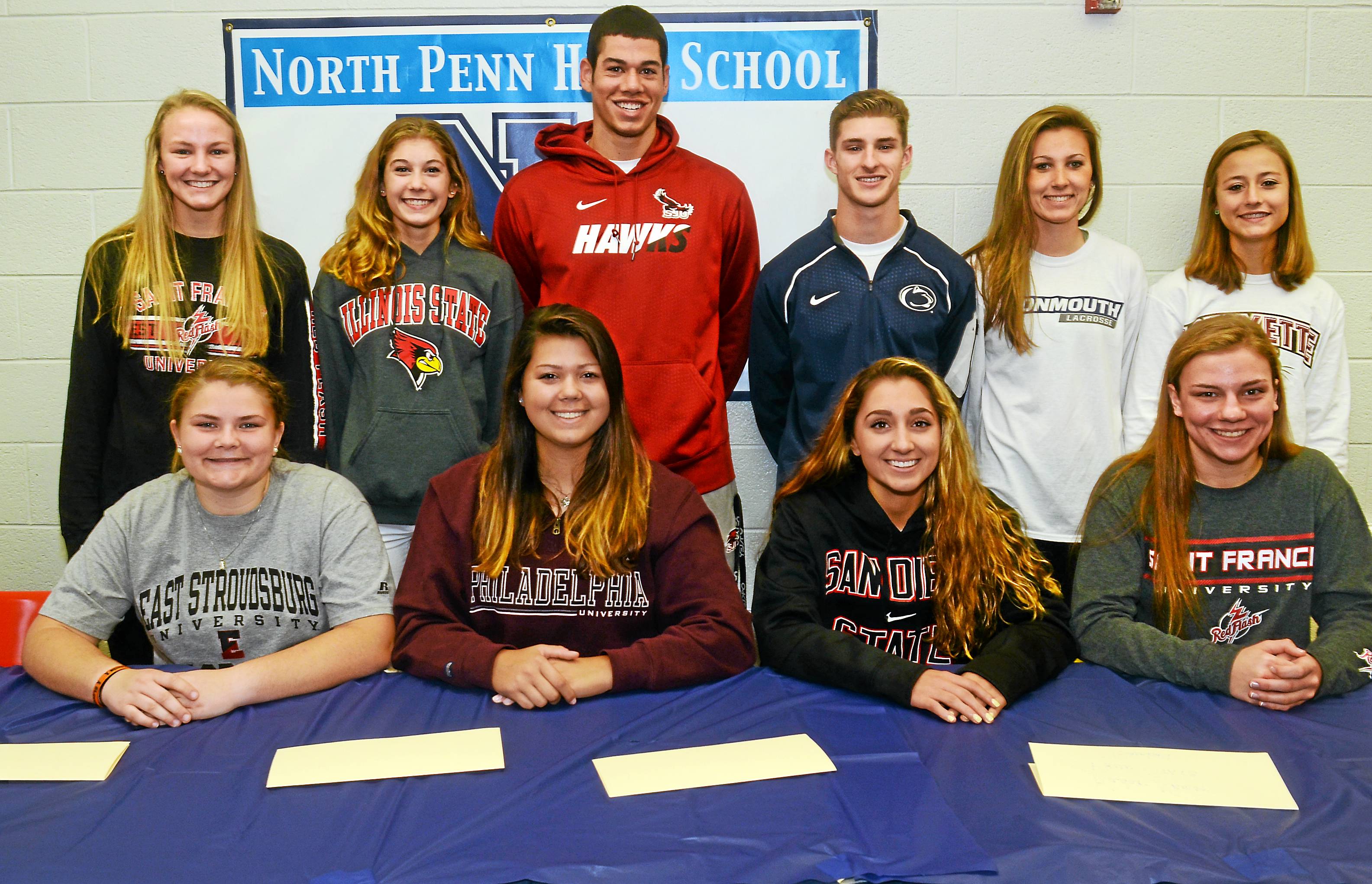 TOWAMENCIN >> For an high school athletic program, there is always a sense of achievement when it has students succeed at a high enough level to continue their athletic careers in college. Thursday, North Penn showed just how much it has achieved, as the school had 10 student-athletes announce their intent to play a sport at the next level.

“Just saying that we have ten athletes signing with colleges explains how big of a deal this is, it’s a great day here at North Penn High School,” North Penn athletic director Bill Bartle said. “You watch the individuals, you watch the student-athletes work day-in and day-out, and then you see them earn a scholarship to a college and it’s just a great feeling for everyone involved.”

In terms of the teams represented at the event, it was an extremely diverse group. In all, seven different sports had someone sign, from water polo to baseball, showing just how deep the pool of talent is for the Knights and Maidens.

Jennifer DeLongis signed to play field hockey at Lafayette. NP softball’s Jovanna Alfonsi is heading to Philadelphia University with Phoebe Clowser to compete in track and field at Illinois State.

While all of these student-athletes arrived at the same point in their careers, announcing their decision to play college athletics, it was a different path for most of them.

For example, Novak has always known she wanted to play lacrosse at the next level.

However, Namey had a decision to make during his sophomore year if he wanted to continue to get better on the diamond and have a chance to play in college.

“Sophomore year I sat down with my family and my training and hitting coach and they told me that if I really wanted to play in college, that I would have to drop football and basketball,” he said. “So I decided to do that and buckle down and get ready to play.”

The decision paid off, as he will be attending St. Joseph’s in the fall to play baseball, and it’s one he says he’s glad he made.

“It wasn’t really that hard of a decision,” Namey said. “I knew that I liked baseball the most and it came pretty easy. If that’s what I had to do to continue to play baseball it was a pretty easy decision.”

As far as how they made their decisions, that also can vary depending on whom you ask.

For most, the fit just seemed right and they felt a connection to the coaching staff at the school and/or potential teammates. But, for some, like diver Yacopino who chose to attend San Diego State, it’s as simple as a change of scenery.

“I’m really just excited to be able to train outside because it’s kind of depressing training inside so I’m excited to be outside.” Yacopino said. “I knew I always liked California schools and it’s always been my goal since about seventh grade so I’m really excited that it’s actually coming true and I’m going to get the chance to be in California.”

It takes an immense amount of effort to reach the next level in sports. Not only from the student-athlete, but from the parents, the teachers and the coaches as well, and this event was a great showcase of all the hard work they’ve put in over the years to reach their goal.