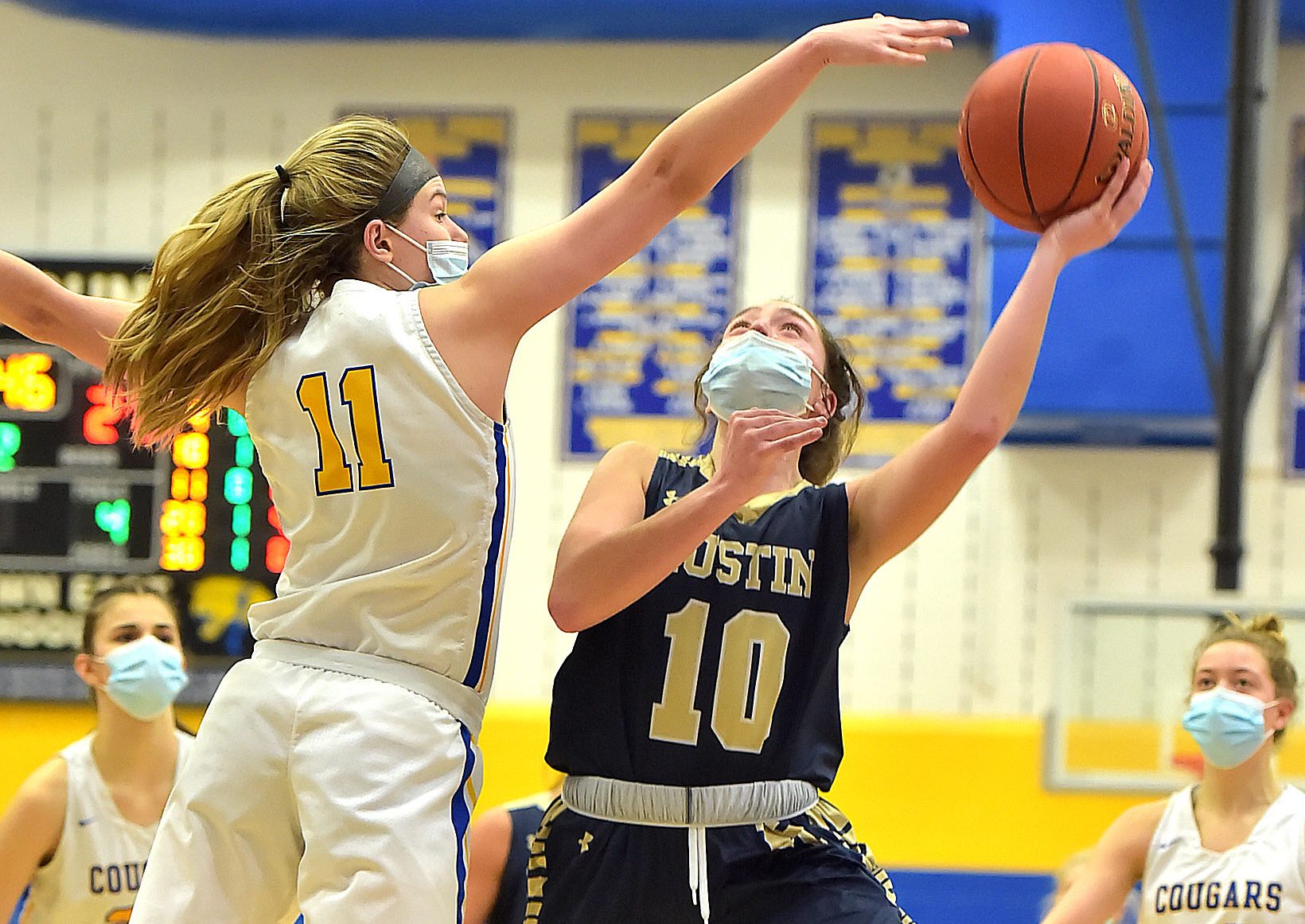 West Chester Rustin’s (11) Julie DeCampli is muscled by Downingtown East’s (5) Cassidy Denning, left and (34) Ariana Smuda in the second quarter.. The Golden Knights went on to a 51-40 victory.

West Chester Rustin’s (4) Gracy Shivers puts up a basket in the second quarter against Downingtown East. The Golden Knights went on to a 51-40 victory.

West Chester Rustin’s (10) Marissa Betchyk puts up a basket in the second quarter as Downingtown East’s (12)Lauren Kent defends. The Golden Knights went on to a 51-40 victory.

West Chester Rustin’s (10) Marissa Betchyk puts up a basket in the second quarter as Downingtown East’s (11) Mary McFillin defends. The Golden Knights went on to a 51-40 victory.

West Chester Rustin’s (20) Lanie McGurk puts up a basket in the second quarter against Downingtown East. The Golden Knights went on to a 51-40 victory.

UWCHLAN >> To knock off the three-time Ches-Mont league girls’ basketball champs, West Chester Rustin knew that it would take its best outing of the season. And that’s exactly what the Golden Knights delivered in round one of the District 1 6A playoffs on Wednesday at Downingtown East.

With a noticeable level of focus and determination, Rustin led most of the way and actually pulled away late to stun the Cougars, 50-41, and advance to the district quarterfinals.

“This was humongous,” said sophomore Laine McGurk, who scored 15 of her game-high 21 points in the second half.

“We were ready when we walked into the gym. This was the matchup that we wanted all season. From tip off, it just felt like we were going to out-work them.”

Now 12-3 overall, the 12th seeded Knights travel to No. 4 Upper Dublin on Saturday, with the winner moving on to the semis. Wednesday’s outcome was a program-defining victory for second-year head coach Lauren Stackhouse.

“I hope this makes a statement,” she said. “We felt like we were given an opportunity to prove the kind of program we have.

“We knew coming in that we needed to have our best performance to beat them, so to do it speaks volumes for my players. I am so proud – they executed the game plan beautifully.”

For Downingtown East, it was a stunning early exit which ends the season due to the pandemic-era one-and-done format instituted by the district. The Cougars entered the game having won 10 in a row, but wind up with a 13-2 overall mark for the abridged 2021 campaign.

“(Rustin) played a really good game,” said East head coach Tom Schurtz. “They executed a little better than we did.

“Rustin had nice balance, they had some timely shooting and we could never get over the hump.”

Clinging to a precarious 42-39 lead with 4:18 remaining, the Knights closed it out by outscoring the fifth-seeded Cougars 8-0 the rest of the way. McGurk scored on a drive, and when Rustin got the ball back, it went into a semi-stall which wound up milking two minutes of valuable time. McGurk then scored again inside to cap the possession to make it 46-39 with 1:20 to go.

“Our coaches have trust in us, and as a team we didn’t want to force things or turn it over,” said senior guard Marisa Betchyk.

“We needed to control the tempo of the game,” Stackhouse added. “If we played at (East’s) pace, we would be chasing them the whole time.

“Once we had the lead, we had the trust in the five we had on the floor that they were going to execute and make good decisions with the ball.”

There were six lead changes during a frenzied first quarter. But Gracy Shivers knocked down back-to-back 3-pointers late to spark a 10-0 Knights’ run. It put Rustin ahead 21-11 and they never trailed again.

“That kind of set the tone for the rest of the game,” McGurk said. “And when we have a lead we are good at recognizing how to control the ball.”

East sliced the margin to three on several occasions the rest of the way, but the Knights responded each time. At 40-37 with 4:47 to go, it was two clutch free throws by Betchyk, who finished with 19 points.

“When (East) pulled to within three, it could have rattled us, but it’s a testament to our players that they weren’t going to hang their heads,” Stackhouse said. “They just kept playing and did what they needed to do to win.”

Rustin committed 14 turnovers against the Cougars’ pressure defense, but only had four came in the second half. And the Knights knocked down 5-6 from the free throw line in the final period.

“We knew it was going to be a tough game, we just didn’t make some shots we normally make, and we didn’t execute to the level we are capable of,” Schurtz said.

“(Rustin) kept us at arms-length all game, and it’s hard to chase down a team when they are playing well.”

Playing in the final game of their high school career, seniors Caroline Brennan and Mary McFillin scored 11 and 10 points, respectively, for East. Sophomore Eileen Hewitt added seven points with every one coming in the first quarter.

“We looked at this game as not only a district playoff game but also the Ches-Mont championship game,” Betchyk said.

“This was the matchup and the game that they wanted,” Stackhouse added. “So to beat (East) at their place as a 12th-seed is a huge accomplishment. My girls played with so much heart, hustle and poise tonight – they played like a team.”