Villa Maria Academy rolls past Phoenixville in district 5A first round 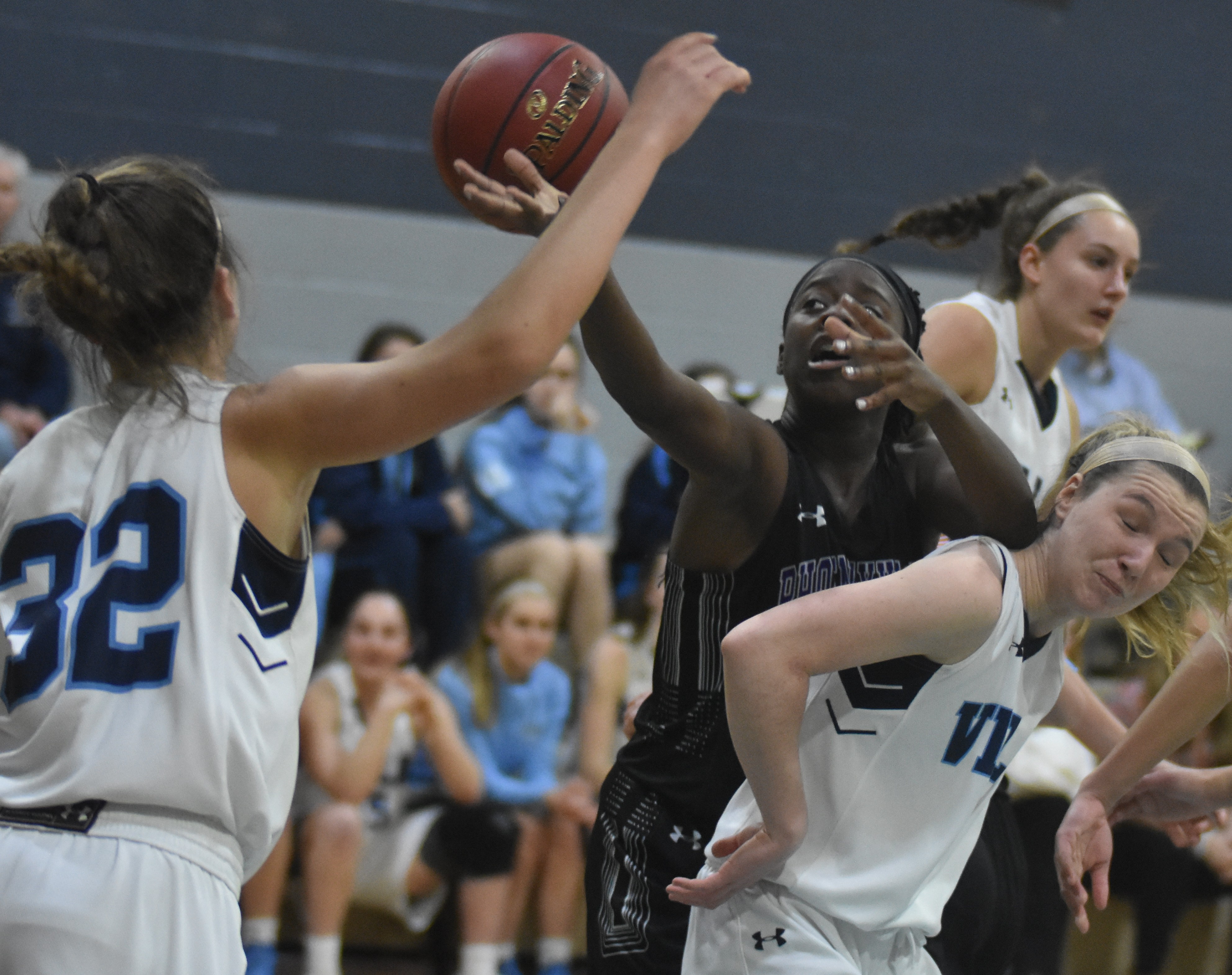 MALVERN >> Phoenixville said goodbye to its seniors, and delivered another glimpse of what the Phantoms can look forward to in the future during Tuesday night’s District 1 5A girls basketball playoff opener against host Villa Maria Academy.

The 15th-seeded Phantoms were eliminated by the No. 2 Hurricanes, 68-27, at the Marian Center.

Villa Maria advanced to a Friday night home game against Harriton at 7 p.m. while Phoenixville saw its season end at 12-12 overall.

Sophomore Aubrie Breisblatt was the high scorer for the Phantoms with 11 points while senior Ameerah Green had eight.

Villa Maria jumped out to a quick 9-0 lead in the first minutes of the contest and maintained its torrid shooting touch throughout the game, especially the first half.

The Hurricanes were up 26-7 after the first quarter and held a 50-13 cushion at the halftime break.

Paige Lauder, a 6-1 sophomore forward, tallied 13 of her 17 points in the first half for the Hurricanes, including one first-period 3-point field goal. Lauder had nine points in the opening quarter.

Maddy Ryan, a 5-10 sophomore forward, added all eight of her points to the cause prior to intermission. Ally Trebelev, sophomore guard, also had eight points while Abby Walheim, a 5-10 senior guard, finished with five points.

“They (Hurricanes) could shoot,” said Behnke. “By halftime, we had them in the upper 80 percent range. They were making everything, twos and threes.

“Obviously, we couldn’t match their size, but it wasn’t their size that beat us. It was their outside shots. Our three seniors gave it all they could, Ameerah, Keara and Hannah. I am proud of the seniors. It wasn’t the ending we wanted, but I think a 12-win season is good. I don’t know what people expected from us.”

“In the third quarter, I put that group in for next year,” he said. “That gave us all a glimpse of the future. Then I put the seniors back in.”

Veteran Villa Maria coach Kathy McCartney was thrilled with her team’s performance. She also gave kudos to Phoenixville for playing hard throughout the entire game.

“We got out on offense really quickly,” said McCartney, who is assisted by Moe Blatt, Helen Hoban and Kristen Walheim. “It was 13-7 and then we went on a 27-0 run to finish the first half. I thought that was really good.

“Props to Phoenixville. They scrapped. They played the whole game. They have some good young kids. They got them some district experience, which is good.”

“We played really well,” said McCartney. “I’m thrilled. It is a great way to open the tournament. We have to build on this. They are great kids to coach. They have length, which teams have to be ready for. We’re long and that is what we try to do.”

Mount St. Joseph pulls away from Pottsgrove in district 5A first round
Souderton starts fast, rolls past Owen J. Roberts in District 1-6A 2nd round