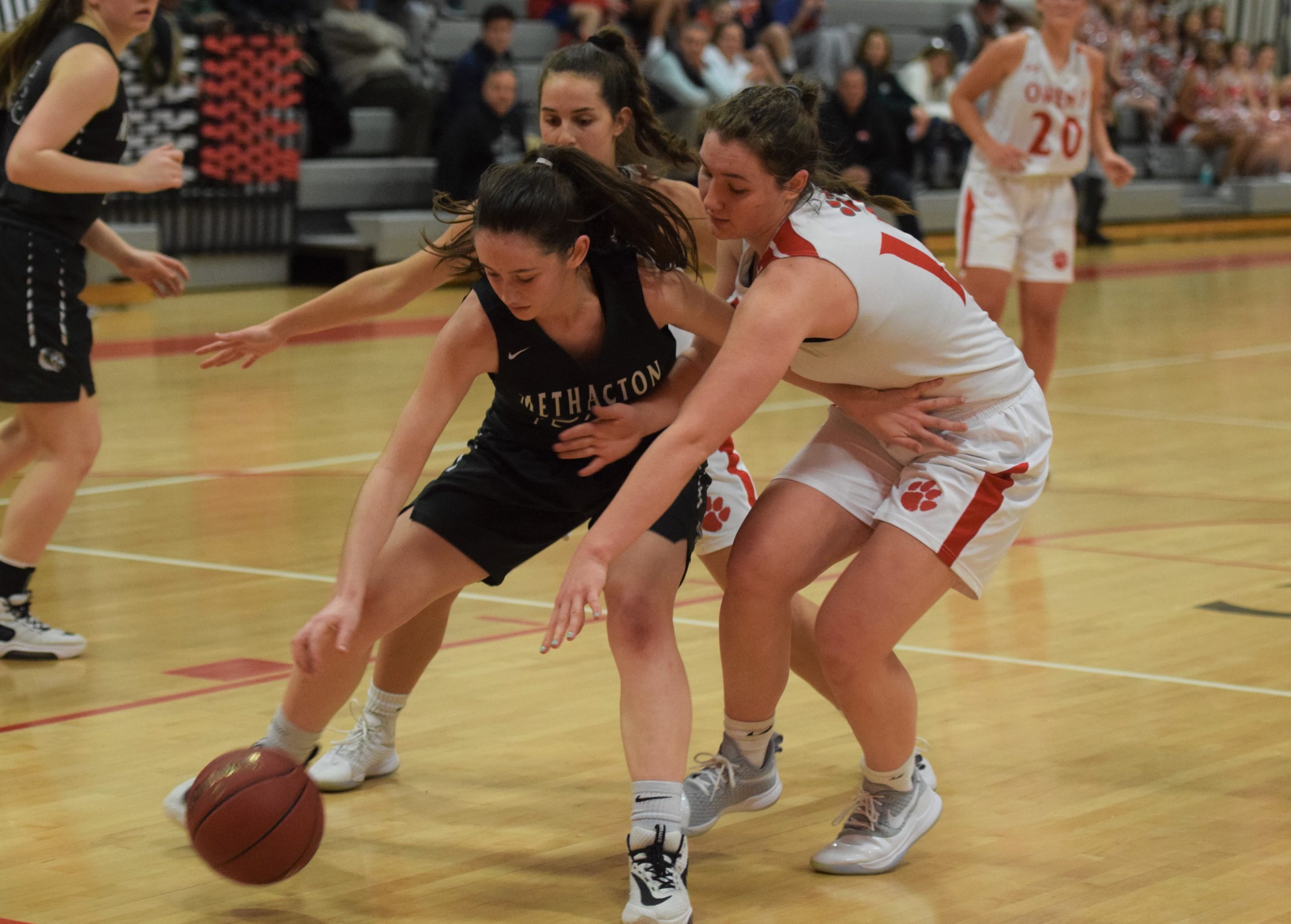 BUCKTOWN >> Tim and Cheryl Timko have some tough choices during the winter sports season.

“Usually we split it,” Nicole Timko said about her parents’ attendance, “but my brother has Senior Night so they’re both there.”

With Thursday night being Senior Night for the Methacton boys, both parents were in attendance for Erik and the Warriors’ blowout win over Owen J. Roberts.

But Nicole Timko didn’t lack for support, especially at the end of the Methacton girls’ matchup with Owen J. Roberts. Timko drained a pair of free throws with 39.6 seconds remaining to cap her game-high 17-point night to put Methacton over the top in a 41-39 Pioneer Athletic Conference Liberty Division victory.

“I feel like our energy really picked up at the end and that really contributed into getting the win,” Timko said. “I think if we keep that energy up, that will be how we’ll win more games in the future.”

Winning time >> The game slowed down after a Timko 3-pointer tied it at 39-39 with 5:44 to play. The score would stay there until under a minute when Timko drove down the left side of the paint, earning a trip to the line and fouling out LeClaire in the process.

“I just saw an opening and I went for it,” she said. “I knew it was close so I had to do whatever I could.”

The sophomore knocked them both down for a 41-39 lead with 39.6 to play and the Warriors withstood a frantic finish by the Wildcats for the win.
I just knew I had to make them,” she said with a chuckle. “I felt confident. I think I’ve done a lot better on free throws this year than last year.”

Timko burst on to the PAC scene as an impact freshman last year and was a Mercury All-Area first team player. At 15.7 points per game entering Thursday, there’s been no sophomore slump.

“I definitely tried to improve on getting quicker shots up because now opponents know I’m a shooter, a lot more teams get up on me defensively,” she said. “I’ve also tried to improve on my jump shot and getting to the rim and fouled if I’m having trouble on the 3.”

“It’s hard,” Timko said of the increased attention, “but it’s fun to try to overcome.”

Owen J. upped the intensity with a full-court press in the third quarter that worked to great effect. The Wildcats went on an 8-0 run – six by White – for a 34-30 lead. They never led by more than four late.

Big picture >> It was another resume-building win for Methacton (19-2), which is No. 5 in the District 1-6A rankings, and secured the second Liberty Division spot and No. 3 seed for next week’s PAC Final Six, which begins Wednesday at Spring-Ford.

Owen J. Roberts (15-6) settles for the first wild card for the Final Six. The Wildcats are No. 12 in the District 1-6A rankings.

Second time around >> The Warriors are on a nine-game winning streak that includes a 42-39 overtime win over reigning PAC champion Spring-Ford. Their most recent loss was to Thursday’s opponent, OJR, 48-37 on Jan. 7.

“Especially after losses – we lost to (OJR) last time, lost to Spring-Ford the first time – we share our struggles. If someone is having trouble with something, we find a way to get around it in practice,” Timko said.