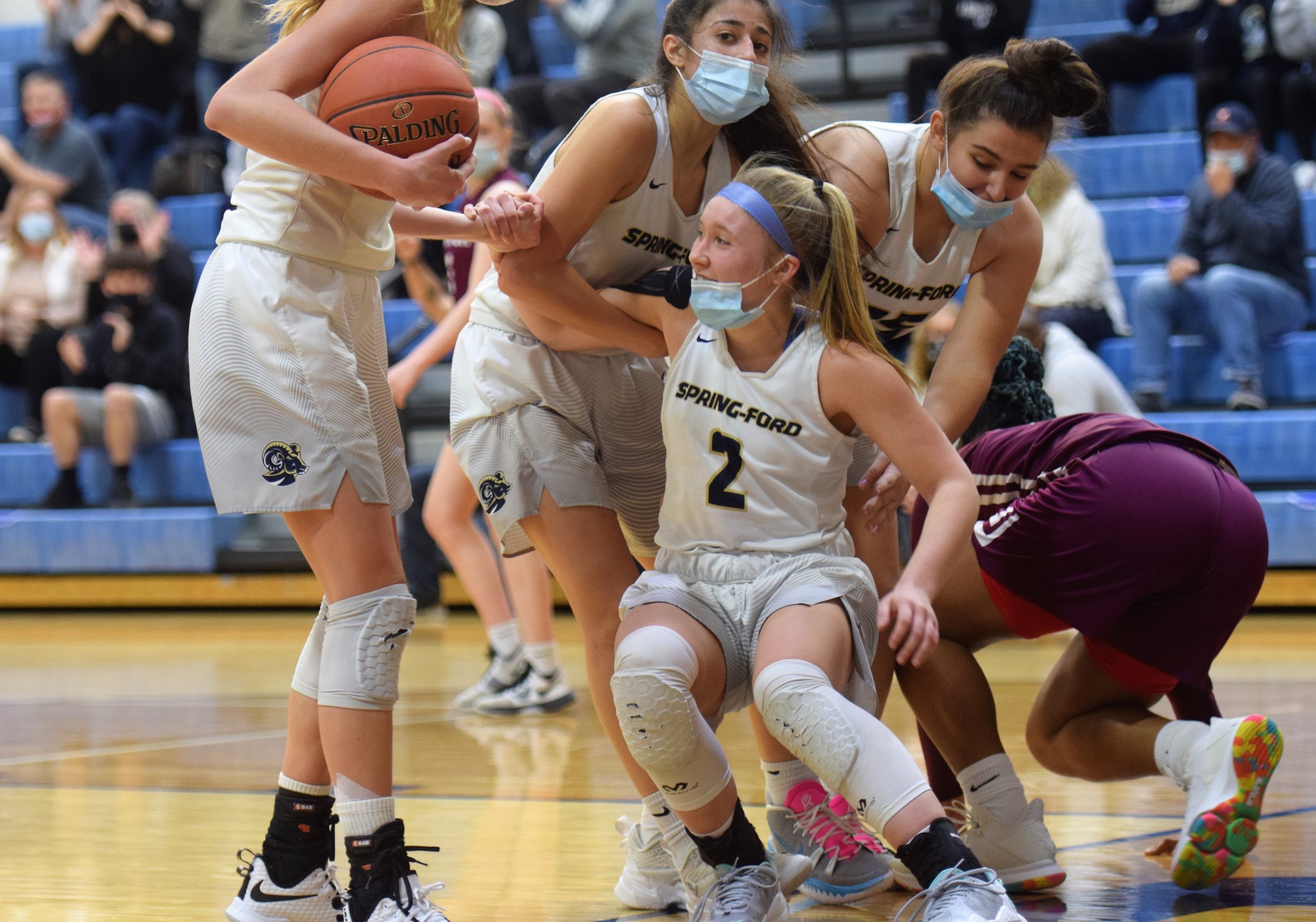 Spring-Ford's Abbey Boyer (2) is helped up by teammates, from left, Lucy Olsen, Anna Azzara and Mac Pettinelli after taking a charge in the third quarter. (Austin Hertzog - MediaNews Group)

The next time the Rams needed a lift, the 5-3 senior guard took a fall – twice – to make sure her message fully came through.

Boyer’s pair of charges sandwiched around a 3-pointer ignited the decisive 13-0 third-quarter run that allowed No. 1 seed Spring-Ford to run away from No. 8 Abington, 58-41, in their District 1 Class 6A quarterfinal Saturday.

“It’s exciting,” Boyer said. “We came out, played our game and set the tempo. I thought we worked very well as a team.”

The undefeated Rams (21-0) host No. 4 Upper Dublin, a winner over No. 12 West Chester Rustin Saturday, in the district semifinals Wednesday at 7 p.m.

Abington caps its year at 14-5 after being held to its second-lowest output of the season. The Ghosts’ leading scorers were Jaida Helms (9 points) and Khalis Whiting (8).

“They took us out of what we wanted to do and we were never really comfortable offensively to get anything going,” said Abington head coach Dan Marsh. “We knew how good they were and knew it was going to be difficult.

“Spring-Ford, they’re probably going to win a state championship. They have maybe the best player in the state, so we’re not upset that we lost. We maybe would have been a little happier it we responded to the adversity a little better.”

Games aren’t won or lost on individual plays, but a game of runs – like Saturday – feature little moments that mean more.

Boyer took a charge early in the first quarter, left the game for a brief stint and then returned to knock down a pair of corner 3s that ignited a 19-3 Spring-Ford lead capped by a Pettinelli 3 at the 1:32 mark of the first quarter.

The Ghosts came storming back with an 11-0 run capped by an Abril Bowser 3 to get Abington within 21-17 with 6:33 in the second quarter.

The Ghosts got within one the final minute of the second, trailed 31-28 at halftime, and were back within one (31-30) on a Whiting floater early in the third quarter.

That’s when Spring-Ford’s next – and decisive – run came.

After an Olsen putback and Pettinelli finger roll, Boyer took her second charge of quarter – third of the game – 11 seconds after draining a 3-pointer to give the Rams’ a 38-30 lead and all the momentum in an arena with more atmosphere than most this winter.

“I just felt like I needed to go out there and play my best, play very good defense and just put 100 percent effort in,” Boyer said. “I think it brought more energy to everyone and it boosted everyone.”

“Abbey’s charges – three of them – she’s been awesome,” said Spring-Ford coach Mickey McDaniel. “She has the school record of 11 in a year. A charge after hitting a 3, you can’t ask for more of a crowd-uniting moment.”

Between the atmosphere and relentless opponent, the Ghosts lost their way, according to Marsh.

“I worked for Coach Cheney (Temple legend John Cheney) way back as a student manager and he would say that we were ‘emotionally drunk.’ And we were,” Marsh said. “We allowed the emotion of the moment to dictate how we play. Khalis doesn’t play like that, but she got emotional and tried to do too much. Their hearts are in the right place, but it’s not going to work against a team like this. They’re too good.”

Spring-Ford was up to 44-30 after its 13-0 run when Azzara finished an Olsen steal in transition at 1:47 in the third. The Rams rarely let Abington have the ball the rest of the way.

“We responded to the adversity in the first quarter. They came back out in the third quarter and really put the nail in the coffin,” Marsh said. “You know they’re going to make runs and it’s how you respond. We responded the first time. But the second run they made, we didn’t respond.”

Spring-Ford killed the clock the entirety of the fourth quarter, playing keep-away from the Ghosts and only attempting one field goal – a wide-open Boyer layup – the entire quarter. It handled the rest of its business at the free-throw line by going 10-for-15 (18-for-27 overall) in the fourth.

“It makes it tough with the ball-handling they have, they could pull it out with a whole quarter to go. That’s tough,” Marsh said.

The Rams’ clock-killing unit that had only one turnover in the fourth included its two freshmen Azzara and Pettinelli, who have both impressed as rookies.

“Starting from Day 1 the team has always been very welcoming to toward us. They were going to be there for us on and off the court,” Pettinelli said. “So when me and Anna get put in these situations in close games and they need people, we have to step up. When (Coach McDaniel) puts me in, I take that as a sign that he needs me out there for the team. I really have to push it and keep my energy up.”

McDaniel was thrilled with the winning attitude of his team against a dangerous opponent.

“Abington is so well coached and they’re a very good team. They’re going to be heard from for a while,” he said. “It was a test. I think our non-conference schedule helped prepare us, especially because they came at the end to be able to prepare for (playoffs).

“I’m really proud of how they held their poise, kept themselves in check and had great attitude. They showed today how attitude wins games. They were really fantastic today.”

It was the second straight season Abington’s season was ended by a Pioneer Athletic Conference opponents after last year’s exit at Owen J. Roberts as the No. 19 seed. But as the No. 8 seed after finishing behind district semifinalists Plymouth Whitemarsh and Upper Dublin in the Suburban One League Liberty, the Ghosts were a team few wanted to face.

With its three leading scorers in Whiting, Helm and Cire Worley, who was held to seven points by S-F’s Emily Tiffan, all returning and a final eight spot that would qualify for the PIAA tournament in a non-pandemic season, Abington is primed for even better next year.

“It’s a growth period. We’re super young. Last year we wouldn’t have been in this position to play this team. This team wasn’t mentally ready to fight the way they fought this year,” Marsh said. “I’m happy and the future’s bright. I’m just upset for the seniors who didn’t get an opportunity to play in states. We would have been in states (in a non-pandemic season). These seniors are getting the short end of the deal on a lot of things and this is another one.”

Marsh was also full of praise for the commitment and leadership his three seniors, Rachael Muller, Amanda Jackson, Allison Holden.

He especially hailed the character of Jackson, who took in stride a move from a starting to reserve role this season.

“Amanda ended up losing her starting spot, but she handled it like a champ. I’m super proud of her,” Marsh said. “She continued to stay in the moment. She’s going to play at Houghton College next year and she could have said, ‘I just want to get out of here’, but she didn’t. She continued to lead and work hard and be a great example.”

Abington vs Spring-Ford (District 1-6A quarterfinals)