Spring-Ford smashes Parkland 60-25 in PIAA 6A first round 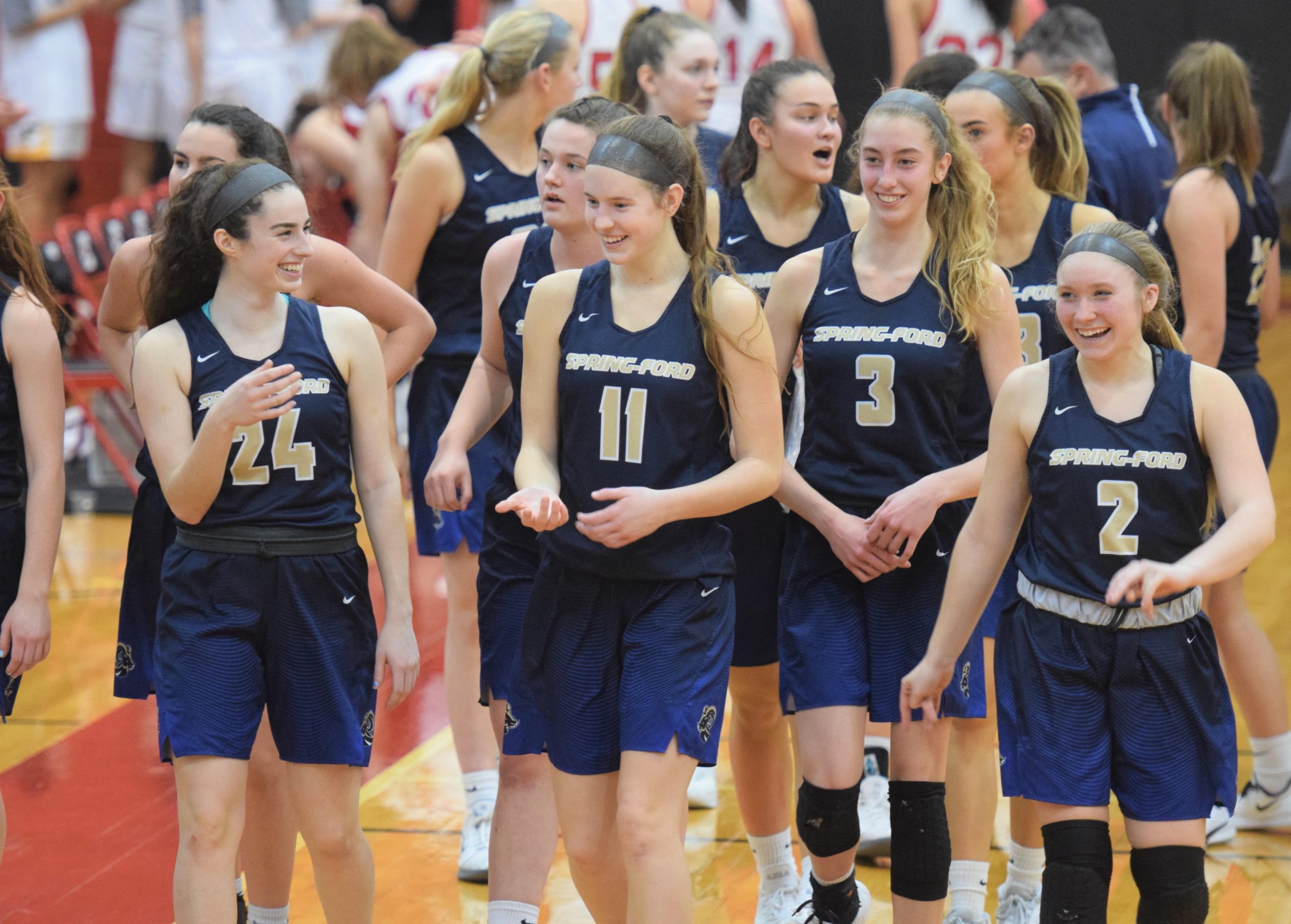 EASTON >> The Spring-Ford girls basketball team spent the last few weeks in its own version of Groundhog Day.

The Rams dropped a heartbreaker in the District 1 semifinals, had an underwhelming performance in the district third-place game and entered the PIAA Class 6A tournament on their only two-game losing streak of the season. Just the same as last year.

That was a prelude to a state first round game in the Lehigh Valley against the District 11 third-place team. Last year, that meant letting an inferior opponent hang around and force Spring-Ford to hold off a late rally to advance.

As for this year … it’s safe to say “I Got You, Babe” will not be playing when the Rams’ alarms hit Saturday morning.

Spring-Ford dominated at both ends of the floor getting 13 points each from juniors Lucy Olsen and Emily Tiffan while forcing 17 turnovers and rolling past Parkland 60-25 Friday night at Easton Middle School.

“I think we really needed a game to gather ourselves,” said Olsen. “I think we came together as a team in this one. We had a lot of energy and picked it up from our last two games. I think we’re back.”

“I’m really proud of the girls. They executed the game plan perfectly, the tempo, how we were defending the post, how we were getting out on some shooters,” Spring-Ford coach Mickey McDaniel said. “Offensively, they really executed too. It really was good from that standpoint because we had two tough losses and we wanted to get back on the right side of the ledger, not just by a ‘W’ but by playing good basketball. And they accomplished that.”

Unlike last year’s first-round game against Nazareth where Spring-Ford led by double digits but had to hang on late to win 48-44, there was zero hangover from districts on Friday night.

The threes were only a small piece of the contribution for Tiffan, who was in her third game back after a two-month injury held her out since the end of December.

There are plenty of people around the Spring-Ford program happy about the two-way junior standout’s return. Tiffan herself is probably the happiest of all though.

“It was really hard to just sit and watch. I’m really happy to be back,” Tiffan said. “Even when I just dressed and didn’t play, it was so good to get a feel for things. Now, getting back in the swing of things, I’m really excited, especially with it being states now.

Spring-Ford started hot from three and was up 15-4 after one quarter and grew the margin to 33-13 at halftime with Olsen showing the full complement of her skill set in the second quarter. The lead built to 30, 53-21, on a Sullivan drive and kick to Boyer for 3 with 6:25 to play and served as a reminder that the first round this year and last year are not the same things.

“We definitely didn’t want to let them hang around. We came out in the beginning and really showed that,” Olsen said.

Parkland (16-11) was held to single digits in each quarter. The Trojans were led by Zoe Wilkinson’s 10 points.

While Parkland’s season ends, the realignment Rams hope things are just beginning after their rocky patch.

“We had a team meeting just to come together and see if we really wanted to win states. And we really do, so I think it worked and hopefully we can keep going,” Olsen said.

Johnson, Goretti too much for Saint Basil in PIAA Class 3A opener
O’Hara has plenty in reserve in win over Souderton