Spring-Ford shares the wealth, eases by Penn Wood 67-36 in 1-6A second round 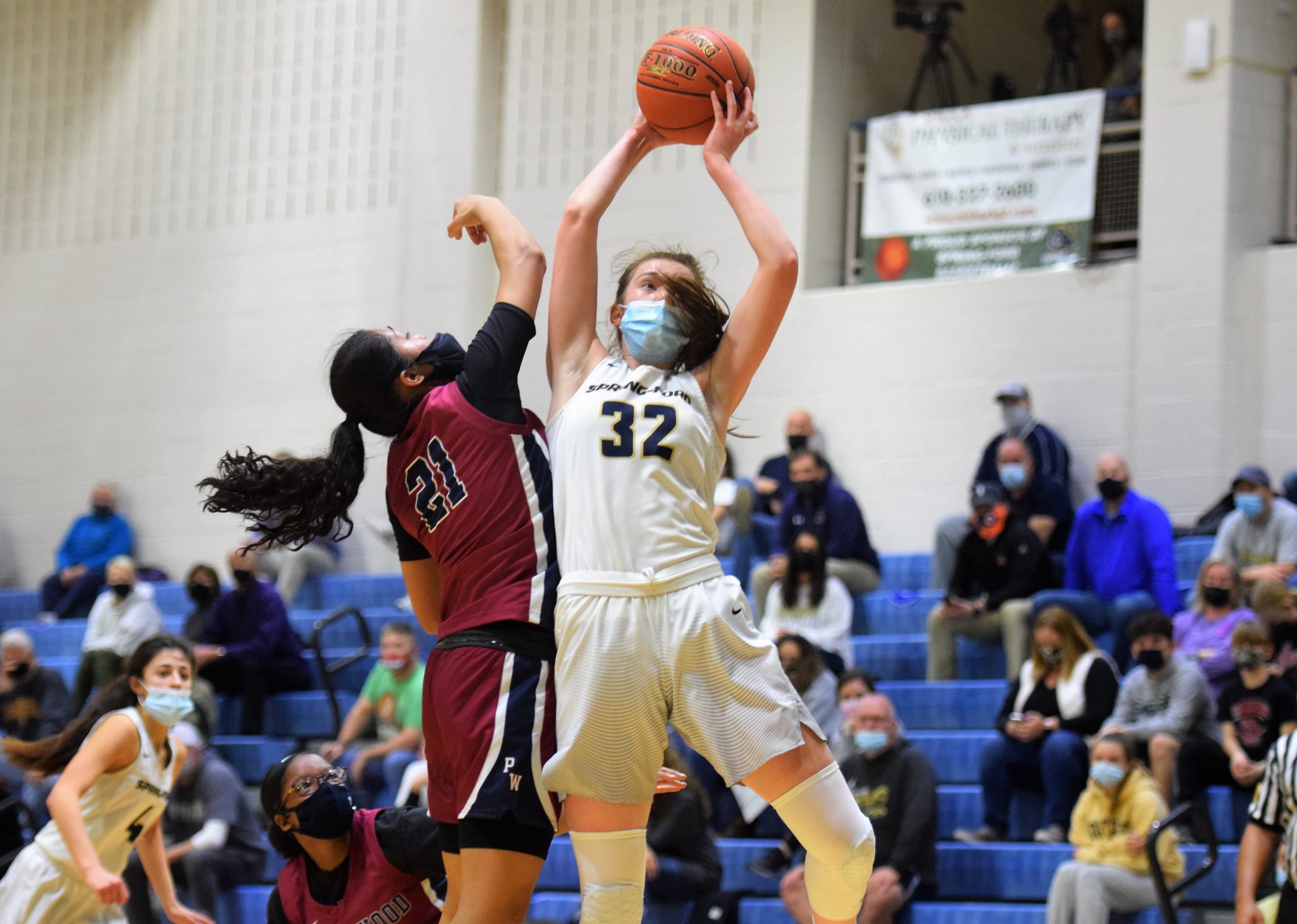 The Rams senior forward strode over, assessed the situation and went to help the handful of people folding and reracking chairs from the sideline.

Though she was actually called to be interviewed by a reporter, she was apparently still in game mode, which meant doing what Hudak and her teammates had spent the past hour-and-a-half doing: assisting.

With Hudak and freshman guard Anna Azzara playing major roles in the ball-sharing effort and senior guard Lucy Olsen striking for 24 points, No. 1 seed Spring-Ford cruised by No. 16 Penn Wood, 67-36, in a District 1-6A second round game.

Spring-Ford ran its record to 20-0 with a ball-moving clinic that featured assists on nearly every basket. It set up a quarterfinal matchup with No. 8 Abington – a 68-56 winner over Methacton – on Saturday.

“We’re always looking for the next best shot,” Hudak said. “If we’re moving the ball and someone is open then we’ll let it rip.”

“It was really good. Everyone was getting open, hustling to the spot,” Azzara said. “It’s easy to share the ball when everyone is working hard.”

Along with the 24 points and 10 rebounds from Villanova recruit Olsen, seniors Abbey Boyer and Emily Tiffan added 13 and 11, respectively.

Hudak scored six points, along with six boards and a pair of assists, while Azzara had a game-best eight assists and scored three, her lone basket a buzzer-beating 3-pointer to end the first quarter with a 25-4 Rams’ lead.

Rams untroubled in this one pic.twitter.com/hWNn2QzBc6

The lead grew to 30 (44-14) shortly before halftime on an Olsen 3. The game had a running clock during the second half.

“I think our girls were off tonight. Usually we grab more rebounds and are able to do more,” said Penn Wood coach Monique Boykins. “In the beginning we were defensively tuned, we were sound and had them working. But overall, where we lacked was the defense.”

The Patriots made the district playoffs for the second straight year under Boykins, who is in the second year of her second stint guiding Penn Wood.
Penn Wood defeated another PAC school, Perkiomen Valley, in the first round.

“The last couple years we’ve made it to districts. Making it past the first and second round, we’ve always been right there,” Boykins said. “This is my second year here and we want to keep pushing them and developing this team to be more disciplined when I left.”

Penn Wood’s LaShanda Smith is fouled by Spring-Ford’s Lucy Olsen on a drive to the hoop during their District 1-6A second round game Wednesday in Royersford. (Austin Hertzog – MediaNews Group)

Penn Wood graduates three seniors – Ashley Cyrus (7 points), Raquel Curry (2) and Angelee Jarrett (2) – but has a foundation Boykins believes will be ready to return to the postseason.

“We’re still young. We have only three seniors this year and we’re still developing,” said Boykins. “We’re going to keep rolling with the punches and be back next year.”

Hudak is part of a Spring-Ford class that became the first four-time PAC champions and as the only traditional forward of the starting five has a big role to play down low.

“Normally I’m known as a defensive person so I feel like I’m not a huge scorer, but with the assists I’m happy to find the next person and to fill my role with defense and rebounding,” Hudak said.

“Going for the rebound is all about attitude. We play as a team and have the attitude for going after the ball and wanting it.”

Azzara is the Rams’ only non-senior starter and has been a pillar of poise at the point in her rookie year while being the team’s third-leading scorer at 9.0 points per game.

“It’s been great. Everyone has my back and is hyping me up,” Azzara said. “They’re all such nice teammates and coaches.”

The one-sided games appear to be over for Spring-Ford, which has home-court advantage for the duration of districts as the No. 1 seed. It scheduled strong non-league games after completing its perfect Pioneer Athletic Conference run and is ready for what lies ahead.

“We love it. We love the competition and the close games,” Azzara said.

Penn Wood vs Spring-Ford (District 1-6A second round)