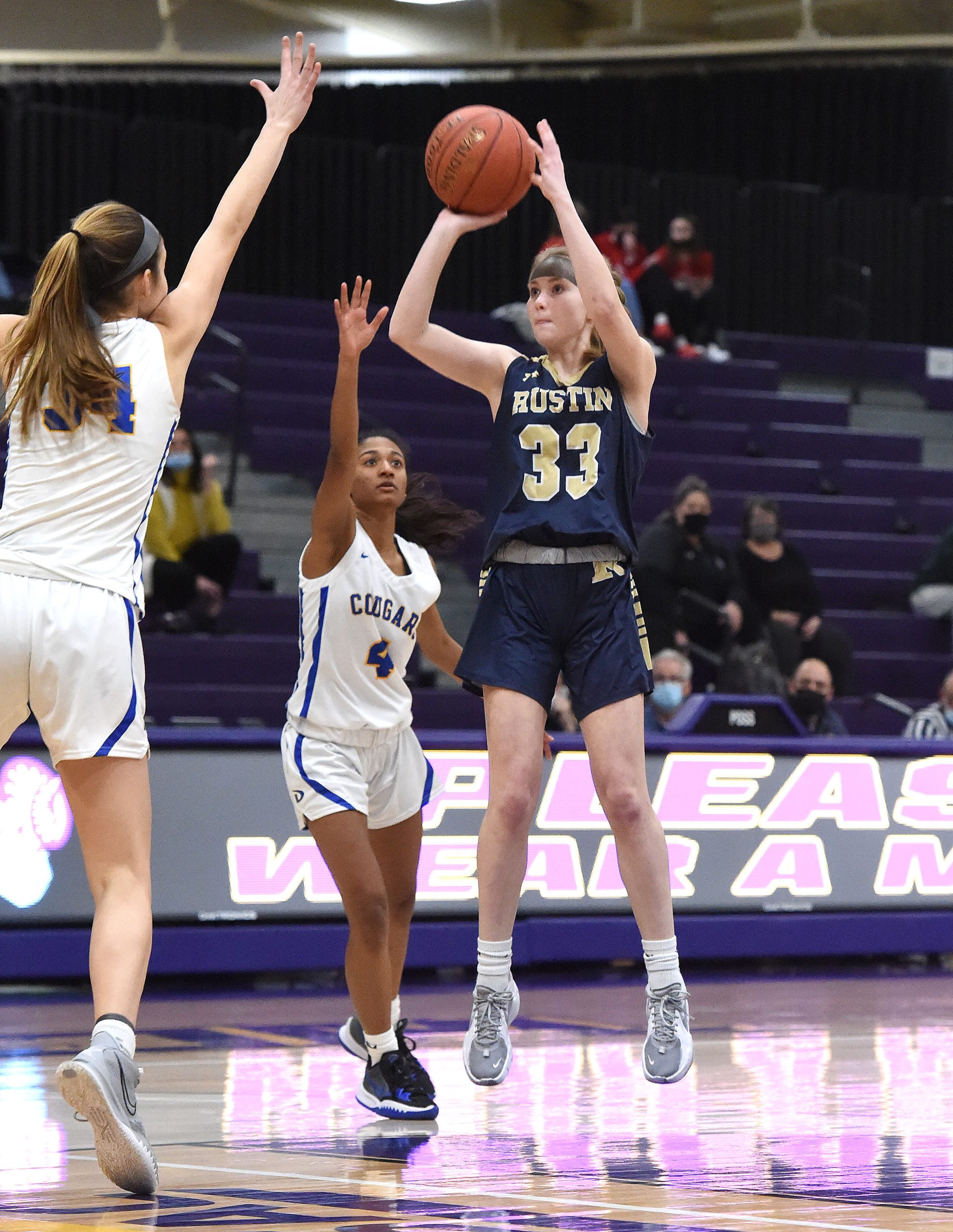 WESTTOWN >> Game on the line, quarterfinal district berth at stake, student section stomping their feet and making a wall of sound. Enough to unnerve the saviest among us.

But, for Spring-Ford’s Anna Azzara, it was more of inspiration than a distraction. Her free throw gave the Rams a two-point and they survived a last-second 3-point attempt from Laine McGurk as 11th-seeded Spring-Ford knocked off No. 6 West Chester Rustin, 48-46 in the second round of the District 1 Class 6A Girls Basketball Tournament.

“It was definitely a nail-biter, but it was fun,” said Azzura. “You have to try cancel it all out and focus on the rim and your shot, that’s about it.”

“Congratulations to the girls, they were fantastic tonight in the sense of just hanging there when things weren’t going our way,” said Rams’ coach Mickey McDaniel. “We made some uncharacteristic turnovers at key spots, but yet, they stayed calm and cool and got it done.”

Spring-Ford led after three, 39-36, and bumped that up 43-36 on two free throws from Azzara and a driving layup from Aailyah Solliday. A jumper from McGurk and a free throw from Laney Costin cut the deficit to 43-39.
Rustin still trailed 47-41 when McGurk buried a 3-pointer to have the Golden Knights behind 47-44 with 1:08 left. Rustin’s press forced a turnover as Azzara dribbled the ball out of bounds.

That set up a 15-footer from McGurk, who scored 15 of her game-high 24 points in the second half, to cut the deficit to 47-46. The score stayed that way until Azzara was fouled and stepped up in the pressure-filled situation. She made the first, but missed the second which meant that Rustin needed a basket to tie and a 3-pointer to win.

McGurk had the ball in her hand and put up a slightly off-balanced three that hit off the front of the rim and the Spring-Ford faithful let out a sigh of relief before they celebrated.

“Oh, my gosh,” said Azzura. “It was definitely a relief. We had to play good defense and try to make her shot hard.

She’s a good player, but thankfully, she didn’t knock it down.

“When’s the game’s on the line and that’s the best situation we could ask for,” said Rustin coach Lauren Stackhouse. “The ball’s in the hands of our best player and we fully trust her in those moments and opportunities. She’s earned that respect from the coaching staff.”

Above who won or lost, both coaches were more than impressed with the atmosphere brought by the Rustin students, who made it a raucous atmosphere fit for a postseason game.

“It was awesome. Our student section was amazing. It was great to see the student body supporting our team. I feel our girls have earned that and it was great to see all the fans out there tonight, said Stackhouse.

Both teams came out ready to run as the pace was quick and shots went up in a hurry. Rustin held a slight 18-16 lead after one quarter. The Rams outscored the Golden Knights, 16-6, in the second to open up a 32-24 advantage at halftime.

Now, Rustin can go back and correct things and get back at it with a spot in the states on the line.

“I hope they look at this as when one door closes, another one opens. We have to just move forward and take care of business in playbacks,” said Stackhouse.

NOTE: The Golden Knights honored track and field star junior Ava Alexander at halftime Wednesday. Alexander had an outstanding season last year which resulted in her winning the gold medal in the triple jump in the PIAA meet.