Spring-Ford gets past semifinal snag, slams Upper Dublin 47-29 to reach District 1-6A final 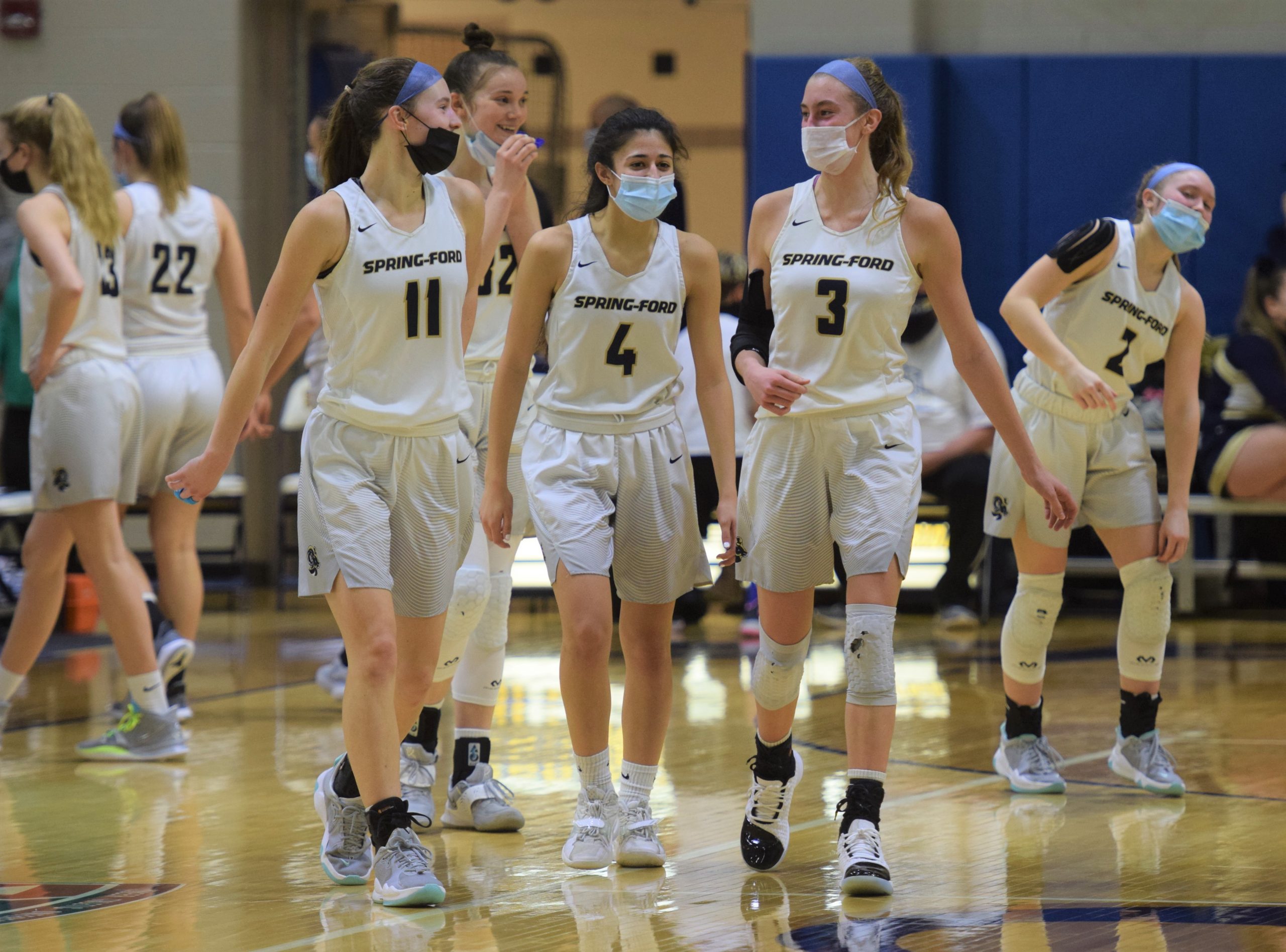 Spring-Ford's Emily Tiffan (11), Anna Azzara (4) and Lucy Olsen (3) smile with one another out a timeout during their district semifinal win over Upper Dublin. (Austin Hertzog - MediaNews Group)

The District 1 semifinals have been the stuff of nightmares for the Spring-Ford girls basketball team.

Every season of Lucy Olsen and her classmates’ high school careers the script’s been the same: a nip-and-tuck matchup, a second-half lead, a late capitulation, an opportunity missed.

For Wednesday night’s district semifinal against Upper Dublin, the Rams devised a perfect plan to avoid such a fate: dominate the first half so much the game would already be decided.

That’s effectively what Spring-Ford accomplished while allowing two first-half baskets and running out to a 24-point halftime lead. With the massive cushion, the verdict was never in doubt as No. 1 seed Spring-Ford rolled to a 47-29 win over No. 4 Upper Dublin to advance to the District 1 Class 6A championship game.

“Fourth time’s a charm,” said Olsen, the Villanova recruit and S-F career leading scorer. “I’m overly excited. We finally made it past this round. But we still have more to go. I’m not settled with just making it to the championship, I want to win the championship.”

No. 2 seed Plymouth Whitemarsh stands in the way of that accomplishment. The Colonials dominated No. 3 Central Bucks East in Wednesday’s other semifinal, 50-19. The championship game will be held at 7 p.m. on Friday at Spring-Ford.

Spring-Ford’s Lucy Olsen, left, tries to get a shot off against the close defense of Upper Dublin’s Sarah Eskew. (Austin Hertzog – MediaNews Group)

“We definitely wanted to set the tone from the beginning of the game and we definitely did,” said Boyer. “We pushed the ball down the floor, we were tiring them out and we got really good shots off. I think we really did a great job.”

Upper Dublin (20-4) will be the one with the difficulty sleeping Wednesday night after having its season ended, as well as the careers of a highly-successful senior class.

The Cardinals entered Wednesday already reeling from the loss of senior standout and East Stroudsburg recruit Polin, who suffered a torn ACL in the team’s quarterfinal win over West Chester Rustin.

The Cardinals’ 2021 class  that includes Dayna Balasa, Jess Polin, Sarah Eskew and Rachel Bilger reached the PIAA tournament in all its previous season, including a state title in 2017-18 – where Balasa and Polin were starters – and semifinal in 2018-19.

Balasa departs as a 1,000-point scorer who will play at the University of Sciences while Polin is the UD program’s career assists leader. Along with Eskew, a multi-year starter, and Bilger, the group has left a lasting mark on the Upper Dublin program.

“My message to the girls afterward was, ‘I can’t say thank you enough for what you have provided the program and the type of role models you are,’” said UD head coach Morgan Funsten. “To match the role models with the performances was really special and it’s a group we’re really going to miss.”

Eskew led an admirable second-half charge by scoring 15. Freshman Amy Ngo added eight but was largely limited by Tiffan after scoring 20 in the quarterfinal win.

Olsen lamented the absence of Polin, who is a teammate on their Lady Runnin’ Rebels AAU team.

“It was a bummer Jess couldn’t play. Best wishes to her recovery. I play with her and she’s such a great teammate,” Olsen said. “She’s such a big part of their team, I think they definitely missed her. She’s a great passer, great scorer. I think it did play into (the result), but I also think we also came out and did our jobs and didn’t allow that to affect our play.”

Spring-Ford and Upper Dublin met in the final week of the regular season, a 49-46 overtime win for the Rams, the only time they’ve been pushed to extra time in the unbeaten season.

Spring-Ford came out scorching hot, up 7-0 in a flash on a Tiffan steal that led to an Olsen layup. The most devastating stretch occurred with a 20-0 run from the middle of the first until 3:32 in the second quarter that featured back-to-back Boyer 3s and Olsen pulling the strings with six points and three assists to build a 27-3 lead.

“I know in my head I didn’t want to have any doubts of losing this game,” Olsen said. “I want to get past this round. I think we all really wanted to win and came out with a lot of energy. They’re a great team so we had to take it to them at the start.”

Spring-Ford was so good early, to the Cardinals it felt like they made every shot.

“They’re a really good shooting team so it’s not a surprise but when you make almost every single shot, that’s a bit of a surprise,” said UD coach Morgan Funsten. “They punched us in the face immediately.

“There was definitely a snowball effect in the first half. Shots weren’t falling offensively and every shot for them was falling. The slightest mistake we made they made us pay and even sometimes when we didn’t make a mistake, they are so talented they still scored.”

The Cardinals closest spot of momentum came on back-to-back 3s by Eskew with three minutes left in the third to make it 32-15.

“In a loss you’re trying to take the positives out of it and I’m really proud of the way we competed in the second half,” Funsten said. “You wouldn’t say we competed all that well in the first half and not just on the scoreboard. We didn’t match their physicality.”

Upper Dublin won both quarters in the second half, yet the margin would not get closer than 17 the rest of the way.

“It’s very exciting. We finally got over this hump,” said Boyer. “We’re going to the district final and we have the potential of winning so it’s very exciting. I think everyone on our team is happy and pumped for getting there.”

Spring-Ford and finals opponent PW met last year in the third-place seeding game after respective semifinal losses. It was all Colonials, 56-42.

“I’m excited,” Olsen said of the rematch with PW. “They whupped us last year so I’m ready to play them again.”