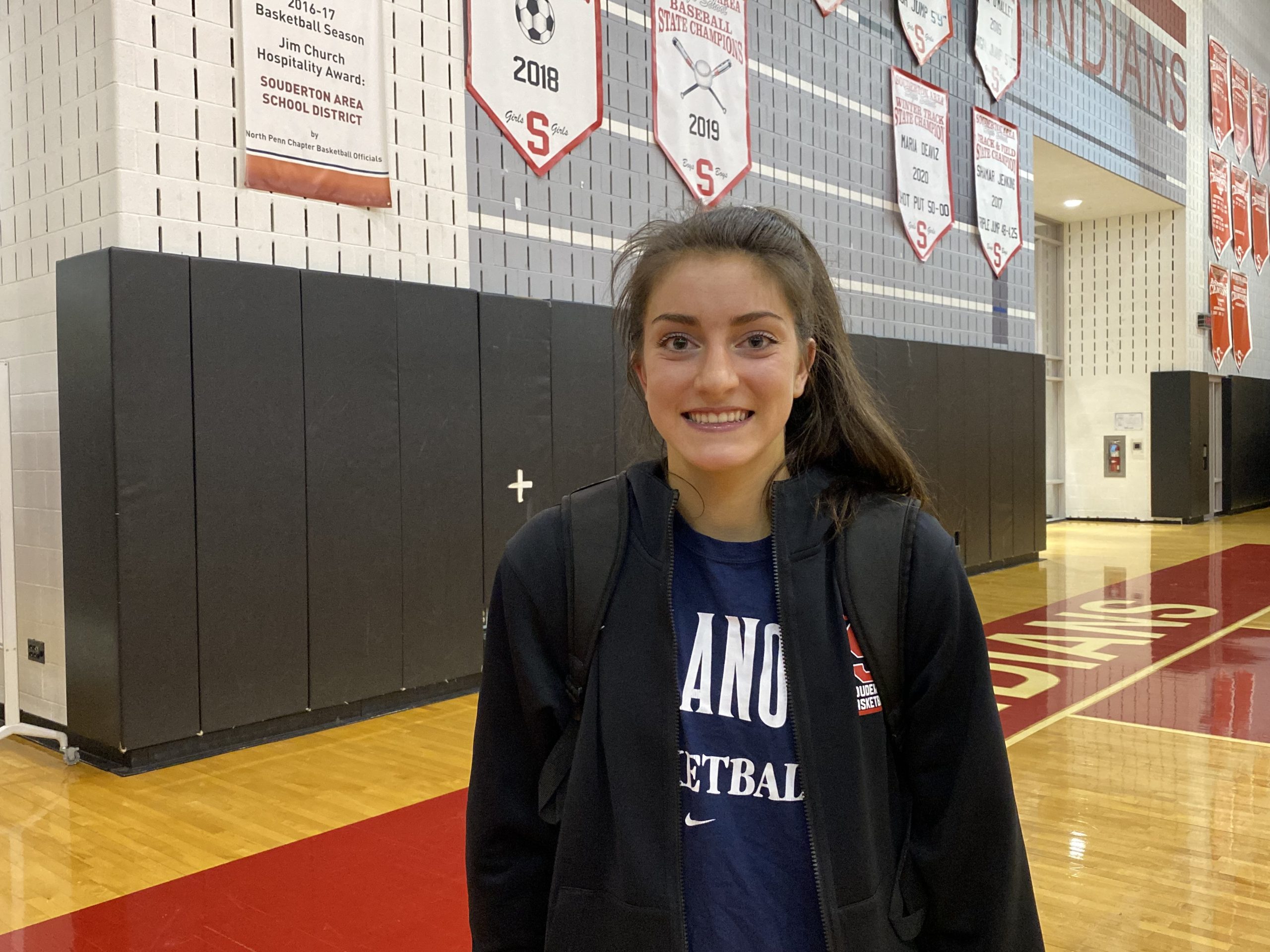 FRANCONIA >> After Teya McConnaha’s two free throws with 36.7 remaining in the fourth quarter gave the Souderton girls basketball team a 41-39 lead, Casey Harter was aware of the Indians’ next task – finding a way to stop Taylor Hinkle.

“I knew that they were going to come to her,” Harter said. “I started face-guarding her and I knew that she was going to shoot it and she’s obviously shooting well, she barely missed. So I kind of just tried to play straight up and not let her get the ball and just play straight-up defense when she did.”

Hinkle had powered No. 15 seed Central Bucks South’s rally from down 11 early in the fourth quarter. And with Wednesday night’s District 1-6A second round matchup still undecided in its final minute, the Holy Family commit got free for a moment to rise up for a 3-pointer from the right wing.

But Harter recovered quick enough to get up a hand to contest the effort, which came up short and deflected off a South player to give Souderton the ball with 14.7 seconds left. McConnaha’s long inbounds to Erin Bohmueller resulted in a breakaway layup and No. 2 Souderton survived the upset bid and moved on with a 43-39 victory.

“Casey, she asked on that last possession if she could face-guard her – the last two possessions – and she did and I think that kind of took her out of maybe her rhythm a little bit,” Indians coach Lynn Carroll said. “And she (Hinkle) was, obviously, she did find a way to get the ball but she really, really played well. I’ve never seen her take over a game like that. It was fun to watch – but also not.”

Harter scored 10 of her team-high 14 points in the first half while McConnaha finished with 10 points as Souderton (22-3) clinched a PIAA berth for the fifth time in the last six seasons and advanced to host No. 7 Perkiomen Valley in the district quarterfinals Saturday. Perk Valley topped No. 10 Neshaminy 44-32.

“Definitely stressful but I knew that we would pull it out,” Harter said. “Obviously they go on runs and they’re a good team and Taylor played amazing and they got it, they tied it at the end but I think we played together enough at the end that we got to close it out.”

The Indians led 13-2 after a quarter with a McConnaha bucket early in the second quarter making it 15 straight points for Big Red. South could only cut its deficit to seven until the fourth when Hinkle scored 10 of her game-high 20 points in the quarter.

“I knew I just couldn’t let her (Harter) shut me down cause she’s a great defender and she does normally shut me down,” said Hinkle, who hit four 3-pointers. “So I knew this is a really big game and it meant a lot for me – and not only for me but my team but I really wanted it this game. I knew I had to do something to kick it in and I tried my best but came up short.”

Five straight points from Hinkle had South within 37-34 while Allison Sauers deflected a Souderton inbounds for a steal and layup to make it 37-36.

Erin Bohmueller converted both ends of a 1-and-1 to put the Indians up 39-36 but Hinkle banked in a three, tying the game with 1:02 remaining.

Souderton regained the lead when Bohmueller dropped a pass inside to McConnaha, who was fouled on a shot at 36.7 seconds. McConnaha connected on both free throws for a 41-39 edge.

“We talked in a timeout about – I mean, what, there was like 50 seconds left – ideally you hold for the last shot,” Carroll said. “I did not feel comfortable doing that at that point in the game. So we went with the play that we’ve had some success with.

“Erin made a great pass, Teya hit two clutch free throws. Not really a position that she’s in much at the end of the game so for her to hit those two was really big.”

Hinkle tried for the go-ahead three on the ensuing possession but it was off the mark, the ball going on on the baseline to the Indians. Bohmueller’s layup off McConnaha’s long inbounds made it a four-point game and the Indians held on for its third win this season over their SOL Colonial Division rivals.

Mackenzie Erb knocked down four 3-pointers in scoring 12 points for the Titans, who visit Neshaminy in the district 9th-12th place playbacks Saturday.

“It’s always tough to play Souderton, they’re in our league so we got to play them twice at least a season,” Hinkle said. “And first time we played them we lost by like 30. It was really ugly honestly. Second time we battled and I think we ended up losing by 11 so it was a lot closer and then ever since our game on Friday we’ve been practicing non-stop for scouting them, doing everything we can to try to beat them.

“Came out to a slow start and it’s kind of hard to dig out of a hole like that but we fought all the way to the end, it was really close.”

A Sauers basket off a steal gave CB South a 2-0 lead but Souderton did the rest of the first quarter’s scoring. McConnaha’s jumper in the lane dropped in to make it 13-2 after the opening eight minutes.

Two more from McConnaha extended the run in the second quarter before Erb’s 3-pointer had the Titans down 15-5.

“I just think we came out really strong,” Harter said. “And we played together on offense and defense and we stopped them on defense and got a bucket on the offensive side. So I feel like we just kind of found the open person and really went after the rebounds and made the lead.”

Trailing 21-9, CB South ran off five straight points – Erb’s triple cutting the margin to seven but Harter grabbed an offensive rebound, had a shot blocked by Hinkle but collected the ball and scored to give Souderton a 23-14 lead at halftime.

“When we struggle to finish, she finds a way,” said Carroll of Harter. “She had a couple putbacks that felt like we really needed them at that time. And the way she can just dribble through and around traffic and find a way to get to the basket, she’s just so good at it.”

Consecutive baskets from McConnaha and Mikayla McGillian to start the third pushed Souderton’s lead to 27-14. South pulled to within nine twice in the quarter, the second time after Hinkle scored inside to make it 31-22 entering the fourth.

McGillian’s putback had Souderton leading 33-22 but Yordana Samayoa’s basket on a drive and an Erb trey had the Titans down 33-27.

After a Bohmueller basket inside off a Harter assist made it 37-29, Hinkle scored the next five – hitting a jumper off a drive then draining a 3-pointer. It became a 7-0 run with Sauers stealing a sideline inbounds and going in for a layup, pulling South within 37-36 at 1:19.

Bohmueller was fouled at 1:10 and hit both ends of her 1-and-1 before Hinkle banked in a 3-pointer off a Samayoa assist to knot things at 39 with 68 seconds left.