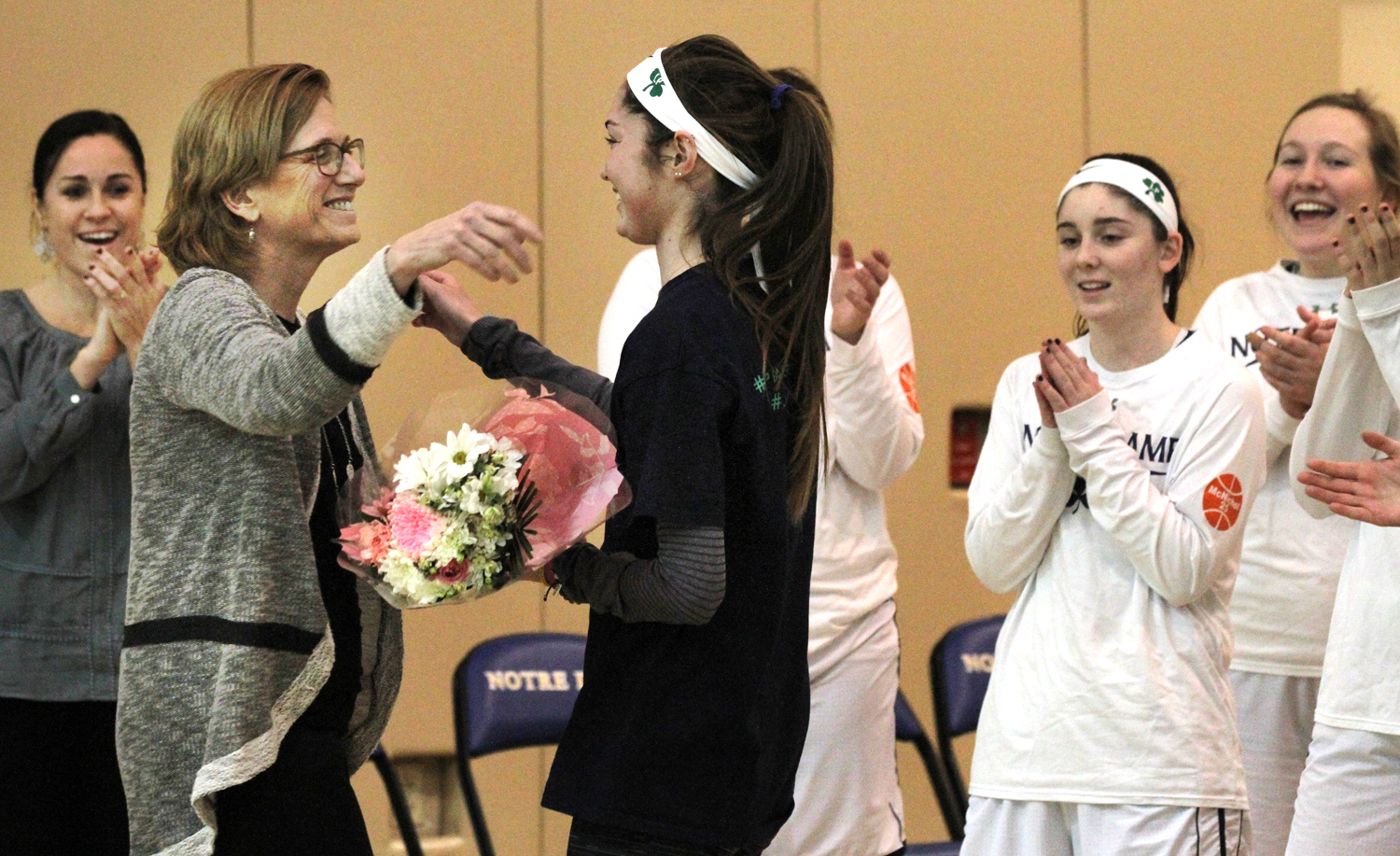 RADNOR >> Leanne Purcell stood on the baseline as her Academy of Notre Dame teammates warmed up prior to their Jan. 5 home game against Episcopal Academy.

The senior cradled a basketball in her right arm and dribbled it from time to time. She joked with her friends as they zipped by, shooting layups and free throws.

She couldn’t play on that day, but Purcell was all smiles. Just being there was enough.

It’s amazing how far Purcell has come since last summer, when she was diagnosed with a rare genetic disorder called Wilson’s disease. According to the Mayo Clinic, Wilson’s is an inherited disorder that causes too much copper to accumulate in the organs. There are less than 20,000 cases reported every year, according to the website.

The story of Purcell’s battle was first chronicled by The Inquirer and Philly.com in December.

“She’ll always mean the world to me,” Purcell said with tears in her eyes. “Words can’t describe how grateful we are for her.”

Four months since her diagnosis, Purcell is back on the court as her team’s biggest fan. She’s not out of the woods yet, but Purcell is feeling much better.

“You don’t expect something like this, so I take each day as a new day and a new challenge. I also don’t take anything for granted now because everything can be gone in a matter of a day, like it happened to me,” Purcell said. “Every single day is something precious to me.”

On that early-January afternoon, prior to Notre Dame’s Inter-Ac League win over Episcopal Academy, Purcell received a nice surprise. The public-address announcer introduced her as the “sixth man” in the Irish starting lineup. She was greeted with a big hug and bouquet of flowers from her coach, Mary Beth McNichol.

“Our second or third game (this season) at Gwynedd Mercy, they did a similar thing,” Purcell said. “I didn’t know they were going to do something else today, but they’ve been great to me and so welcoming to have me back on the team. It’s really nice of them.”

The unwavering support has helped Purcell through this rough time. Without their love, Purcell doesn’t know what she would have done.

“Ms. McNichol and all the coaches have been amazing. They came to the hospital about once a week and they would text me every day just to see how I was,” she said. “It was so nice to have them behind me and supporting me. When I saw my name on the roster, it was kind of funny but nice to know that they still want me here.

Her teammates “made me a bunch of cards, texted me all the time and kept me in the loop even though I couldn’t physically be here back at school.”

Purcell has wanted to be a nurse for as long as she remembers. She will study medicine in college. and was recently accepted into Villanova, her top choice along with the University of Delaware.

“I’ve always wanted to be a nurse and always loved science. Once I went into the hospital I learned those sort of things first-hand,” she said. “When the nurses were telling me procedures, they would tell me what’s going on and try to teach me things as it was happening.”

She’s not back in class, but Purcell is eyeing a Jan. 19 return, for the start of third quarter.

“I’m excited about that,” she said.

Purcell’s impact on her teammates cannot be understated. The Irish were 10-1 and undefeated in the Inter-Ac League entering Tuesday.

“We just kept reminding our kids the whole time … to cherish every day and to look how fast it turned on her, so be grateful you’re on the court,” McNichol said. “You shouldn’t have a bad game or a bad practice because Leanne would give her right arm to be out here.”

“Before games, me and (senior guard) Alex Kane, who also got hurt, we’ll tell them that we would kill to be out there,” Purcell added. “I think they take from that and they know we want to be out there and would give anything. I think that makes them want to give it their all every game for us.”

Purcell keeps fighting. She goes to physical therapy and works out at the gym on a daily basis.

“I’m feeling stronger and feel more like myself,” she said.

For her teammates and coaches, that’s the best news in the world.

“She’s been through so much,” McNichol said, “and we all love her very much.”