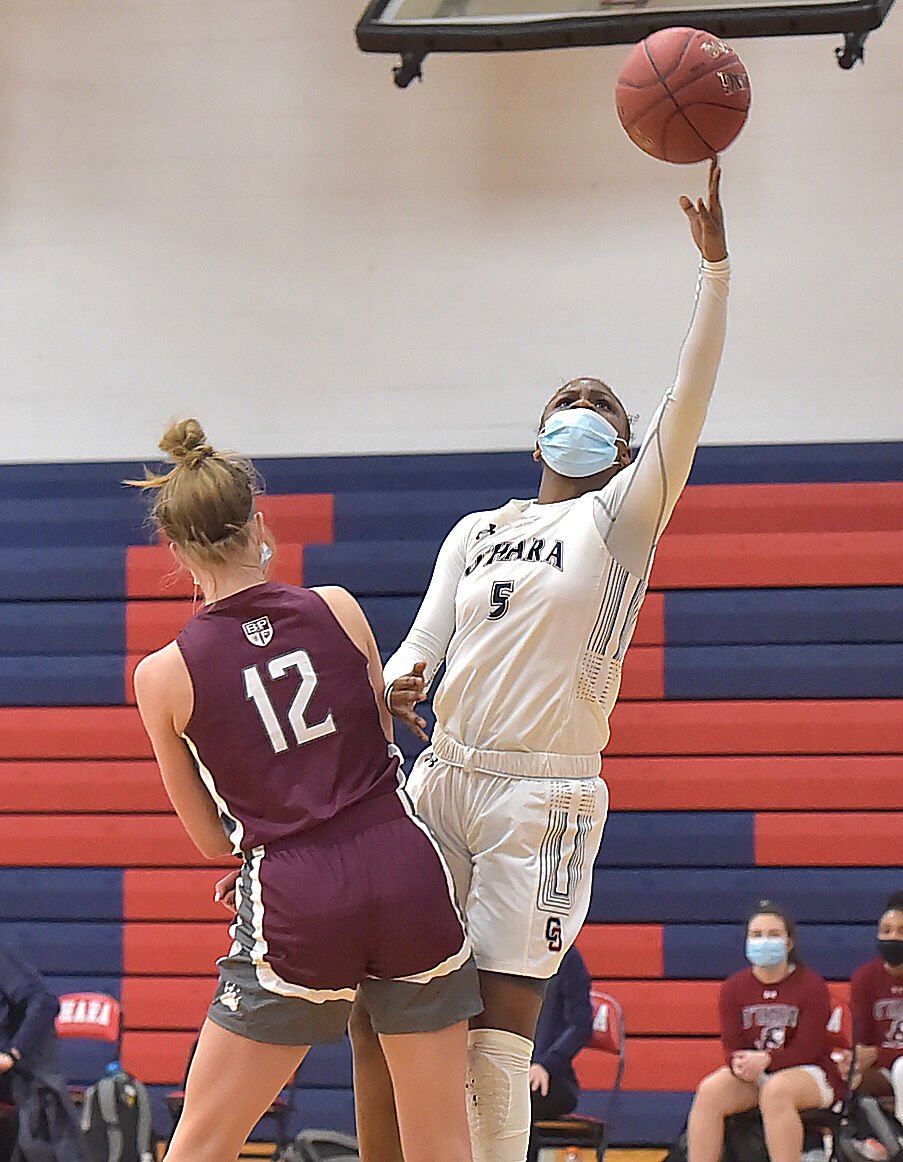 Both outstanding two-way guards for their respective teams, Scott and Wilson forged their friendship years ago in AAU basketball for the Philadelphia Belles.

After Scott helped O’Hara to a 64-55 victory Saturday in the PIAA Class 5A quarterfinal round, members of Wilson’s family met with her to offer their congratulations and say hello. The Wilson family mentioned how they consider Scott a member of their own.

Scott knew she couldn’t let her relationship with Wilson cloud her primary focus Saturday. She had a job to do.

“I was motivated to play against her, but even my coaches said, don’t make it a Kourtney and Sydni game,” said Scott, who produced 10 of her 14 points in the second half. The All-Delco player added four assists and two steals.

Wilson carried the Golden Hawks with a game-high 25 points.

O’Hara will make the short trip to Springfield Tuesday night to play the undefeated District 1 champions, their neighboring Cougars, who claimed a 29-24 win over Abington Heights.

“Kourtney had 25 points, but we were able to hold everybody else down. And we were able to share the ball really well with four kids scoring in double figures,” O’Hara coach Chrissie Doogan said. “It was a good team win.”

The Lions (13-4) were able to turn the page from their loss to Archbishop Wood in the Catholic League final last Sunday. Right now the only thing that matters is getting to Hershey and playing for a state championship. O’Hara is  two wins away from becoming the school’s first basketball team to win a PIAA title.

“We gave the kids off from practice Monday and we had a fun practice on Tuesday and then we kind of started dialing in on Wednesday,” Doogan said. “It was good to come back to get them back on the court and do some drills we haven’t done since January, to get them ready for (Bethlehem Catholic). They came in today and were really prepared.”

With the win Saturday, the Lions played their final game at home, where they went undefeated this season. Their focus is to complete what they were unable to finish last March. O’Hara was in the Class 6A quarterfinals round when the PIAA suspended and then eventually canceled the state playoffs due to the coronavirus pandemic.

“We wanted revenge, I guess you can say, for last week’s loss and we got shut down at this time last year. So, it’s like picking up from where we were last year,” said senior Siobhan Boylan, who had another solid all-around performance for the Lions. The Marist recruit registered 13 points, four assists, four assists, two blocks and one steal.

“We’re really excited, especially for me and all the seniors because it’s our last year playing,” Boylan added, “and we want to go out winning.”

The Lions and Eagles exchanged quick baskets in the opening minutes. Junior forward Maggie Doogan banked a 3-pointer to spur a 7-0 run and the Lions held a six-point lead after eight minutes. Doogan dominated the second period, tallying nine points, as the Lions used an 11-2 run to help them take a commanding 35-24 lead into halftime.

Doogan, who was named first team All-Catholic League last week with Scott, finished with a team-high 18 points on 8 of 11 shooting from the field. She also posted game highs in rebounds (eight) and blocked shots (three).

Bethlehem Catholic  (9-8) kept within striking distance in the second half thanks to Wilson, who went off for 14 points in fourth quarter. She battled Scott one-on-one on several occasions.

Ultimately the Lions were able to answer for every run that Wilson and the Eagles produced. Junior forward Annie Welde swished a corner trey and Wilson hit a 3-pointer to pull her team to within eight. Later, after another Wilson triple, Scott scored on a layup to put O’Hara up 10 with a minute to play.

“The key today was just keeping our composure,” Scott said. “We came today and just hustled for every play. Siobhan was out there diving for the ball. We worked really hard and got the win.”