Salvati, C.B. East show Ridley they’ve been there, done this 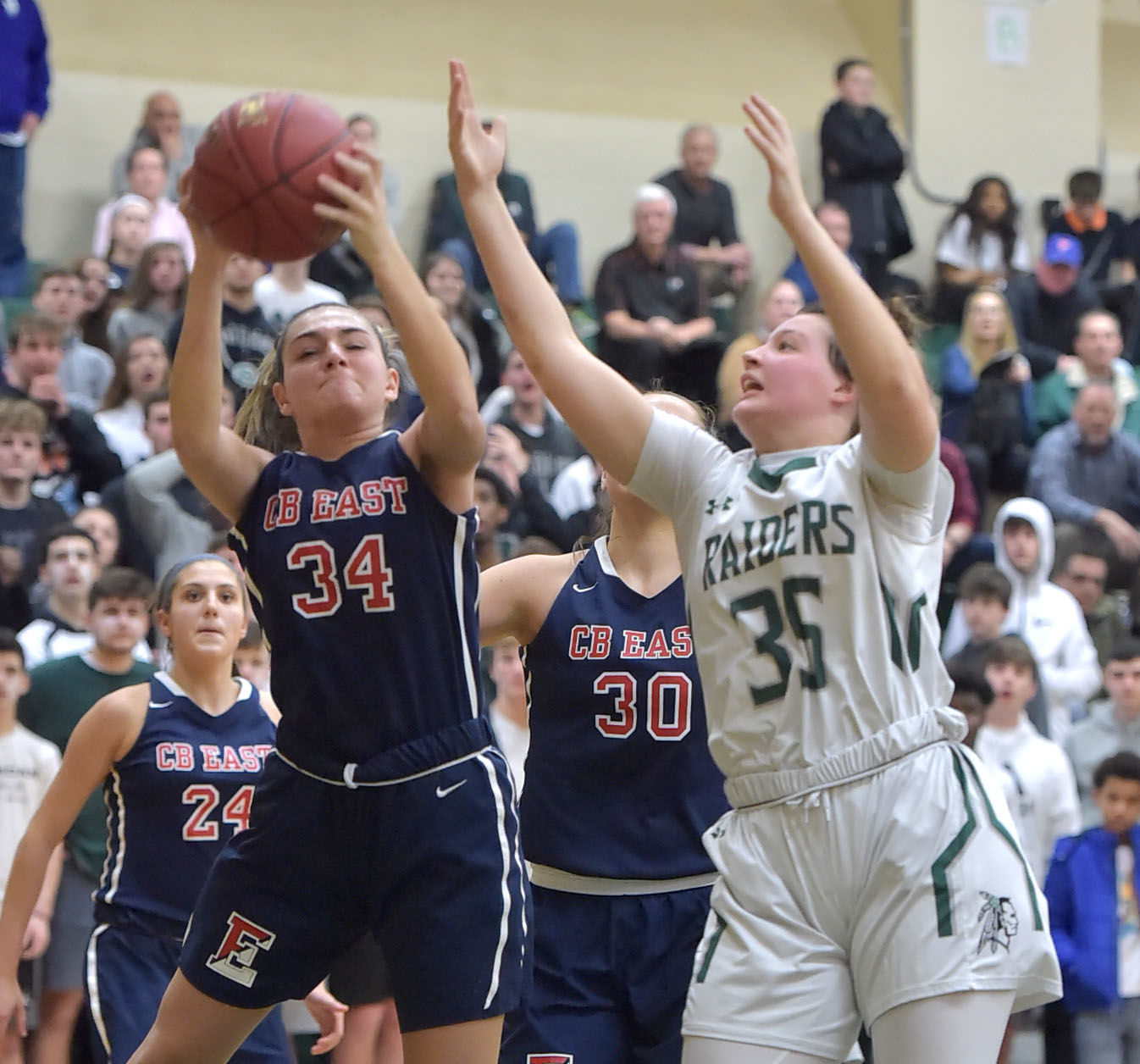 Central Bucks East's Aubrey DeAngelis, left, pulls down a rebound ahead of Ridley's Shannen Hinchey in the second quarter Wednesday night. The Green Raiders fell 56-54 in the opening round of the District 1 Class 6A playoffs. (PETE BANNAN/MEDIANEWS GROUP)

RIDLEY TWP. — For most of the Ridley girls, it was their first district basketball tournament experience.

It was a game they won’t forget for a long time.

The host Green Raiders, the No. 6 seed in the PIAA Class 6A district playoffs, dropped a 56-54 heartbreaker to visiting No. 11 Central Bucks East Wednesday night.

The Patriots (17-6) know they will be playing when the state tournament gets under way next month. Central League champion Ridley (20-5) will have to fight its way through the playback round if it hopes to be joining East in the field when PIAA action commences.

Ridley was all but counted out when it fell behind by nine points early in the fourth period Wednesday. In the closing minute of the quarter, Green Raiders junior Lindsay Boyd (16 points, five rebounds, four steals, one assist) hit a pair of free throws to tie the score at 54.

“Honestly, that wasn’t the way things were supposed to go on that play,” Salvati said. “But we’ll take it. Last year, we lost in playbacks and didn’t make states, so we’re happy to know we’ve made it this year.”

After a timeout with six seconds left, the Green Raiders tried to set up senior guard Dakota McCaughan (22 points, including five 3-pointers, five assists, three steals) for a chance at a winning shot from behind the arc. In a mad scramble for a loose ball, East’s Emily Chmiel (14 points, 14 rebounds, two blocked shots) got her hand on the ball and Ridley’s last bid for a victory expired as the ball fell to the floor while the buzzer sounded.

“We thought Dakota got tackled and the ref had a hand up (for a foul),” disappointed Ridley coach Roe Falcone said. “I told those girls when we went into the room after the game how proud I was of them, how they never gave up, and how hard they played.

“I won’t sleep tonight, but we’ve got to move on and be ready for our next practice and our next game. Our goal is still to make states, and we’ll do what we have to do to reach that goal.”

Ridley saw its five-point halftime lead disappear during a third period in which it was outscored, 21-5, East missed only one of its shots from the floor in those eight minutes while the Green Raiders shot 2-for-11.

“Ridley’s had a great year and Dakota is such a tough player,” Patriots head coach Liz Potash said. “But their girls weren’t used to playing this kind of (postseason) game. We start four juniors and a sophomore, and our girls have playoff experience. We had to play at (defending district champion) Garnet Valley last year.

“At the end there (Salvati) saw an opening and went with it. It might not have been the way we drew it up, but it worked. And (Chmiel) has been averaging a double-double for us all year, and she came up with the big play we needed.”

Chmiel and her teammates had one focus in the final six seconds of the game.

“We knew the ball was going to (McCaughan),” she said. “It was all about wanting it more and making the play.”

Boyd was 6-for-6 from the floor in the first half for Ridley but did not have a field goal after intermission.

“We know we could have played better defense,” she said. “That’s what’s kept us going this year. This has been such a special season, and we all want to keep playing and keep winning.”

It was tough for Falcone to find a silver lining among the darkness in Ridley’s defeat, but she knew that if she expected her team to push on, she would have to do that as well.

“We had a line going out the door with people trying to get in to see this game. These girls have created all of that. That’s Ridley, what they have done. Their goal is still to be in states. There’s no reason to believe that it’s a goal they cannot reach.”

Plymouth Whitemarsh pulls away from Haverford in District 1-6A second round
Fourth win over Owen J. Roberts sends No. 3 Spring-Ford to District 1-6A quarterfinals