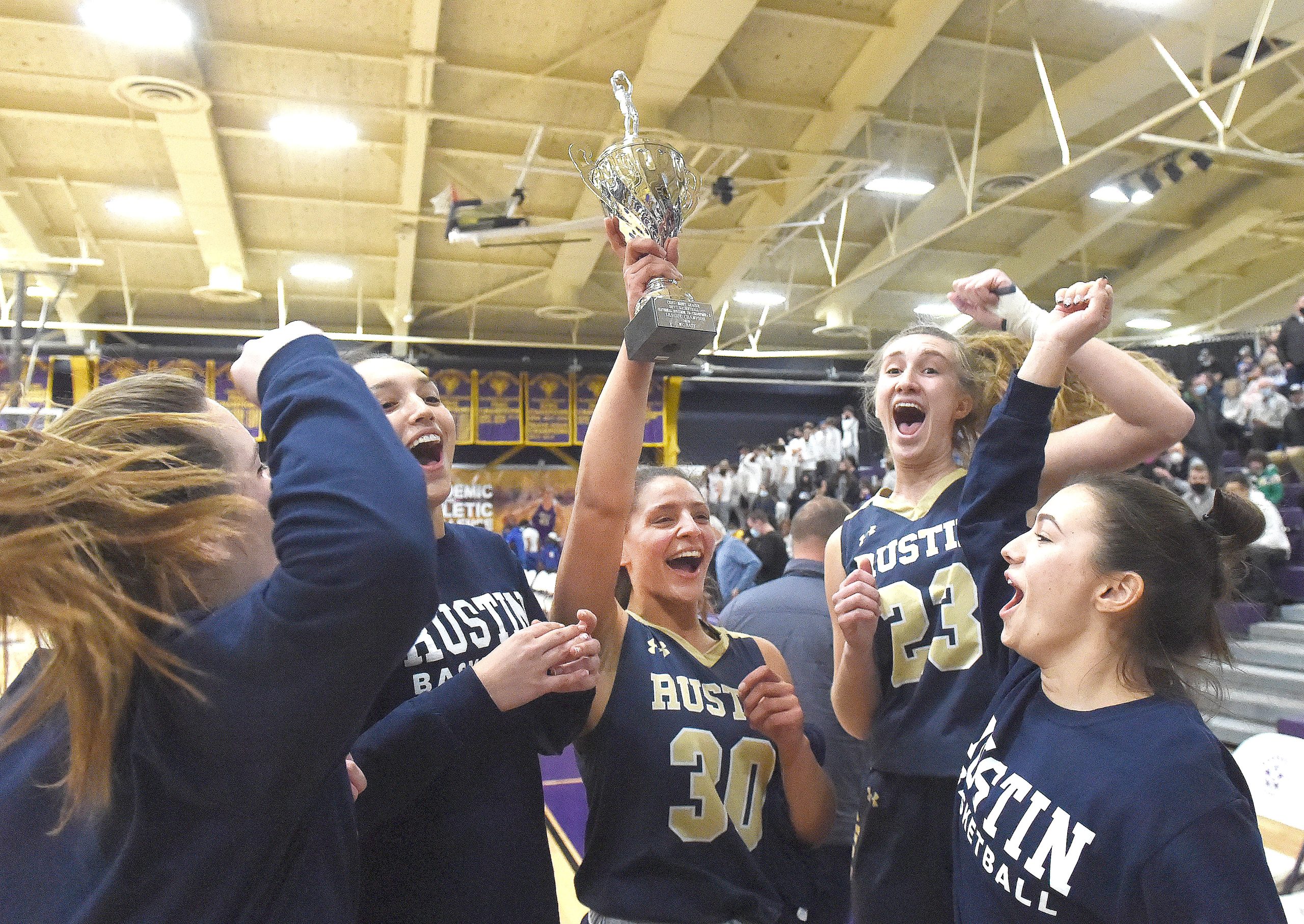 WEST CHESTER >> Good things usually happen with the ball in West Chester Rustin Laine McGurk’s hands. Well, she had the ball late in the fourth quarter of Tuesday’s Ches-Mont League girls basketball championship against Downingtown East, and something happened that wasn’t just good, it was great.
McGurk scored to give Rustin the lead for good en route to giving them the Ches-Mont championship with a hard-fought 46-42 victory over the Cougars at West Chester University’s Hollinger Field House.
“Laine is a game-changer in every aspect,” said Rustin coach Lauren Stackhouse. “I knew that once that ball went into her hands, she was gone and that ball was going down. As a team, we have full confidence in her to make those big shots and make those game-winning shots. That’s what she brings to the table every time she steps on the court.”

“I just knew I wanted to push the ball up,” added McGurk. “I got to the spot I wanted and the shot went in. It felt great to help the team win.”
Rustin prides itself on being a second-half team and if you didn’t believe it, on Tuesday they once again showed why that was the case.
Leading 24-21 at halftime, the Golden Knights built a 36-28 lead after three. After leading 26-25, the Knights went on a 10-3 run in the final five minutes. The adavantage grew to 34-25 after Lola Flynn scored on a putback and was fouled by Ari Smuda, Flynn, however, missed the free throw, and Smuda completed a three-point play after scoring following being left alone after the Cougars broke the Rustin press. Elizabeth McGurk scored just before the end of the quarter to provide the margin after three.

The Golden Knights held the Cougars at arm’s length for more than half the quarter and led, 41-35 with 3:15 left.
But, before Rustin could bask in the championship spotlight, they had to hold East off.
And, for the Cougars, a freshman shall lead them. D-East freshman Jordyn Daniel made a three from the left side, then buried another to cut the deficit to 41-38 with 1:27 left. Seconds later, Daniel was fouled on a drive and made two free throws to bring it to 41-40.
“To ask a freshman to make big shots like that – credit to her for knocking down those two threes. They are a very well-coached team,” said Stackhouse.

D-East head coach Darren Domsohn said, “This group never gives up, they stick together. They believe in the motto, ‘Always Us.’ Credit to Rustin. They played phenomenal tonight. They were tough and well-coached.”
Rustin missed a shot and Lauren Kent made a driving layup to give the Cougars their first lead since late in the second quarter, 42-41.
McGurk then pushed the ball up the court, penetrated the East defense and nailed a short jumper over Smuda to push Rustin ahead with 46 seconds left.
Flynn made one of two free throws with 16.8 seconds remaining.
Kent then front-rimmed a three, Rustin grabbed the rebound. McGurk hit a free throw to provide the final margin.
The Cougars limited McGurk in the first half as they played a box-and-one on her, but once again, secondary scoring proved huge for the Golden Knights. This time it was Flynn and Elizabeth McGurk scoring 14 points and 13 respectively.

“That’s the best part of this team, you never know who’s going to step up to complement Laine,” said Stackhouse. “That’s what makes a tougher team to defend because on any given night any one of my five can step up and that’s why we love these girls so much and are proud to be their coaches.”