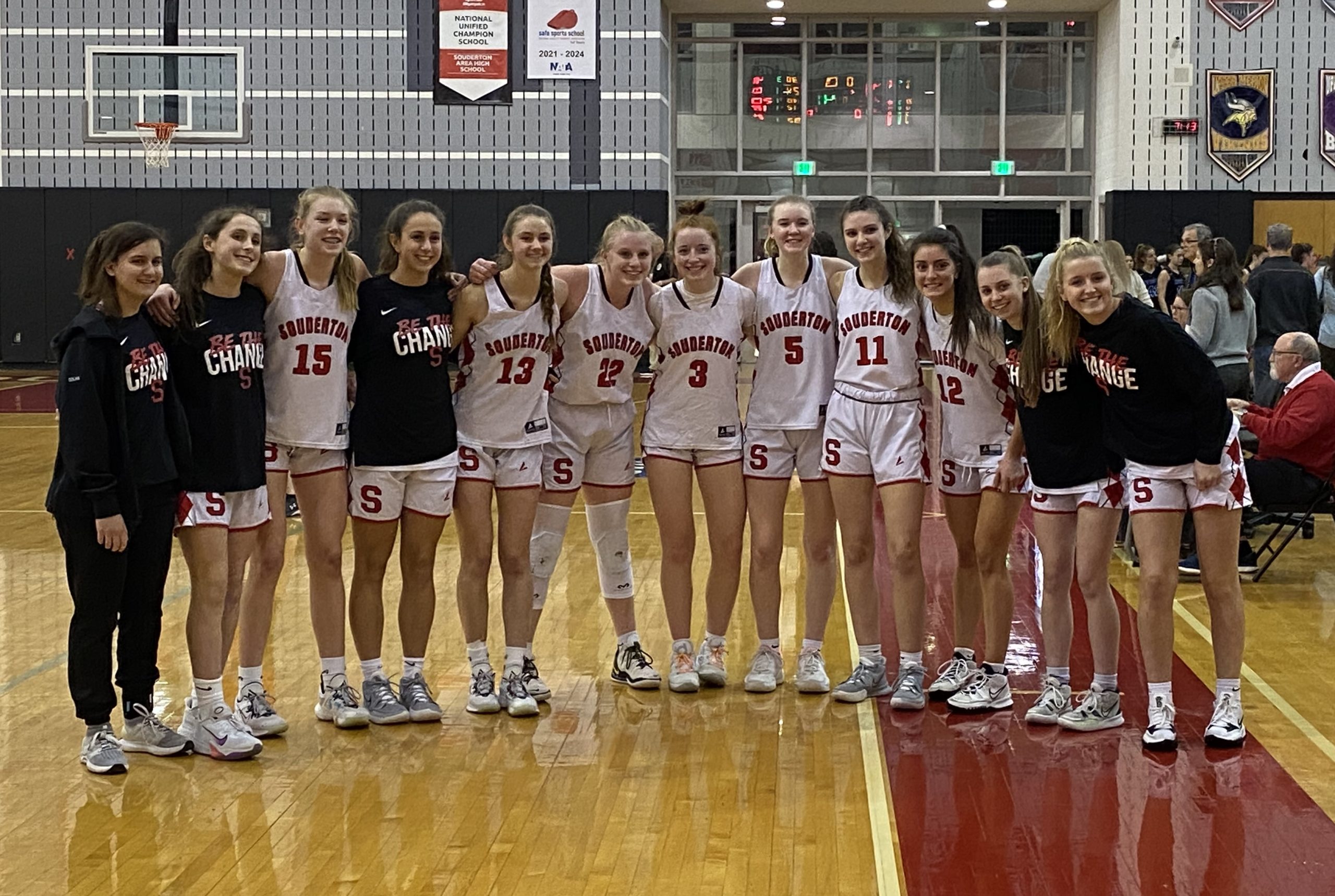 The Souderton girls basketball team members pose for a photo after the Indians' 43-39 win over Central Bucks West in the District 1-6A second round on Wednesday, Feb. 23, 2022. (Mike Cabrey/MediaNews Group)

A program’s tradition sometimes feels like something it just intrinsically has. But it needs to be maintained, the current group of players working to build on the success of past teams.

So when the Souderton girls basketball team continued its recent tradition of qualifying for the PIAA tournament by edging Central Bucks South 43-39 Wednesday in the District 1-6A second round, Indians coach Lynn Carroll did not take the achievement for granted.

“I told them in the locker room after the game it was a lot of years into my career here before we were able to qualify for the state tournament,” said Carroll after the win.  And hopefully, they continue to think it’s just supposed to happen. That would be my preference.

“It takes year-round work, it takes kids committing to getting better six days a week, preseason. It’s what they work for all year and they deserve to be in the position that they’re in right now.”

Playing for the first time since last Monday’s loss to Pennsbury in the Suburban One League semifinals and facing their SOL Colonial Division rival the third time this season, Souderton held off the visiting Titans’ late rally to clinch its fifth state appearance in the past six years.

South trailed by 11 early in the fourth but Taylor Hinkle scored 10 of her game-high 20 points in the quarter to pull the Titans even at 39-39 after the Holy Family commit banked in a 3-pointer with 1:02 remaining.

But Souderton’s Teya McConnaha was fouled on a shot down low with 36.7 seconds and hit both free throws. The Indians kept the lead with a stop on South’s next possession while Erin Bohmueller’s breakaway layup off a McConnaha inbounds pass made it a four-point victory.

“In general I think it’s hard to come out and play a tough game right after a week or more of no games so I think that’s definitely something that kind of was a little bit harder,” said Souderton junior Casey Harter, who paced Big Red with 14 points. “But I think we pushed through it. We kind of just put the Pennsbury loss behind us because they played really well and we can play better and we did tonight and it showed.”

Souderton reached the PIAA tournament four straight years from 2017-2020. The Indians made the 6A state semis in both 2017 and 2018 along with winning the district title in 2018.

In last year’s COVID-19 shortened season, only the District 1 champ qualified for states and the Indians were knocked out in the second round. But the Indians have secured their return to the PIAA field and next host No. 7 Perkiomen Valley in the district quarters 2 p.m. Saturday.  The teams met on the same court Dec. 15 with Souderton winning 53-37.

“It’s really exciting and we waited all season to get here and now it’s time and we’re all really excited to try to get as far as we can,” Harter said. “And I think it’ll go really well.”

Bracket Busters >> Seeding mostly held in the District 1-6A girls tournament, with five of the top eight (No. 1 Plymouth Whitemarsh, No. 2 Souderton, No. 4 Pennsbury and No. 5 Abington) advancing to the quarterfinals.

Rounding out the final eight are No. 9 Haverford, No. 11 Spring-Ford and No. 14 Garnet Valley. The two lowest seeds both have recently won district titles – Spring-Ford last season and Garnet Valley in 2019 – and meet for a spot in the semis at GV.

The boys 6A tournament, meanwhile, has veered a bit off from the expected.

While the top four seeds are through to the quarters (No. 1 Methacton, No. 2 Lower Merion, No. 3 Cheltenham and No. 4 Bensalem) the other four are all double-digits seeds, with the 24-team field’s three lowest seeds all still alive for the district crown.

No. 24 Garnet Valley erased double-digit deficits in the second half to knock off both No. 8 Upper Dublin and No. 9 Spring-Ford.

No. 23 Abington, which reached last year’s district final, outlasted No. 10 Conestoga in double overtime in the first round then bested No. 7 West Chester East in OT in the second round.

Fellow SOL Liberty side Plymouth Whitemarsh – who shared the division title with Upper Dublin and is seeded 22nd – topped No. 11 Central Bucks South then No. 6 Downingtown West.

No. 12 Norristown beat No. 21 Wissahickon at home before going on the road to upset No. 5 Haverford.

Both teams have qualified for the PIAA Tournament. The District 1 champ faces Sankofa Freedom in the District 1/12 regional final March 2.

At 5 p.m., undefeated GMA (23-0) tries for a fifth consecutive 4A title as the top-seeded Monarchs play fellow AACA side No. 2 Villa Joseph Marie for the fourth time this season.

Gwynedd Mercy has won the previous three contests with the Jems, including 44-25 in the AACA final Feb. 14. Both teams qualified for states with their semifinal wins.

In between at 3 p.m. is the boys Class 1A final with No. 4 Faith Christian taking on No. 3 Plumstead Christian. The BAL squads – which both pulled off upsets in the semifinals to earn PIAA berths – last met on Jan. 18 with host Faith winning 63-59.

PAISAA  >> The Germantown Academy girls team begins the Pennsylvania Independent Schools Athletic Association (PAISAA) tournament Friday, the No. 4 Patriots hosting No. 5 Perkiomen School in a quarterfinal matchup at 4 p.m. Winner advances to face either No. 1 Westtown School or No. 8 Friends’ Central in the semis.

GA comes into the game having won three straight and seven of its last eight, the Patriots capping their regular season with a 60-55 road victory over Notre Dame Tuesday.