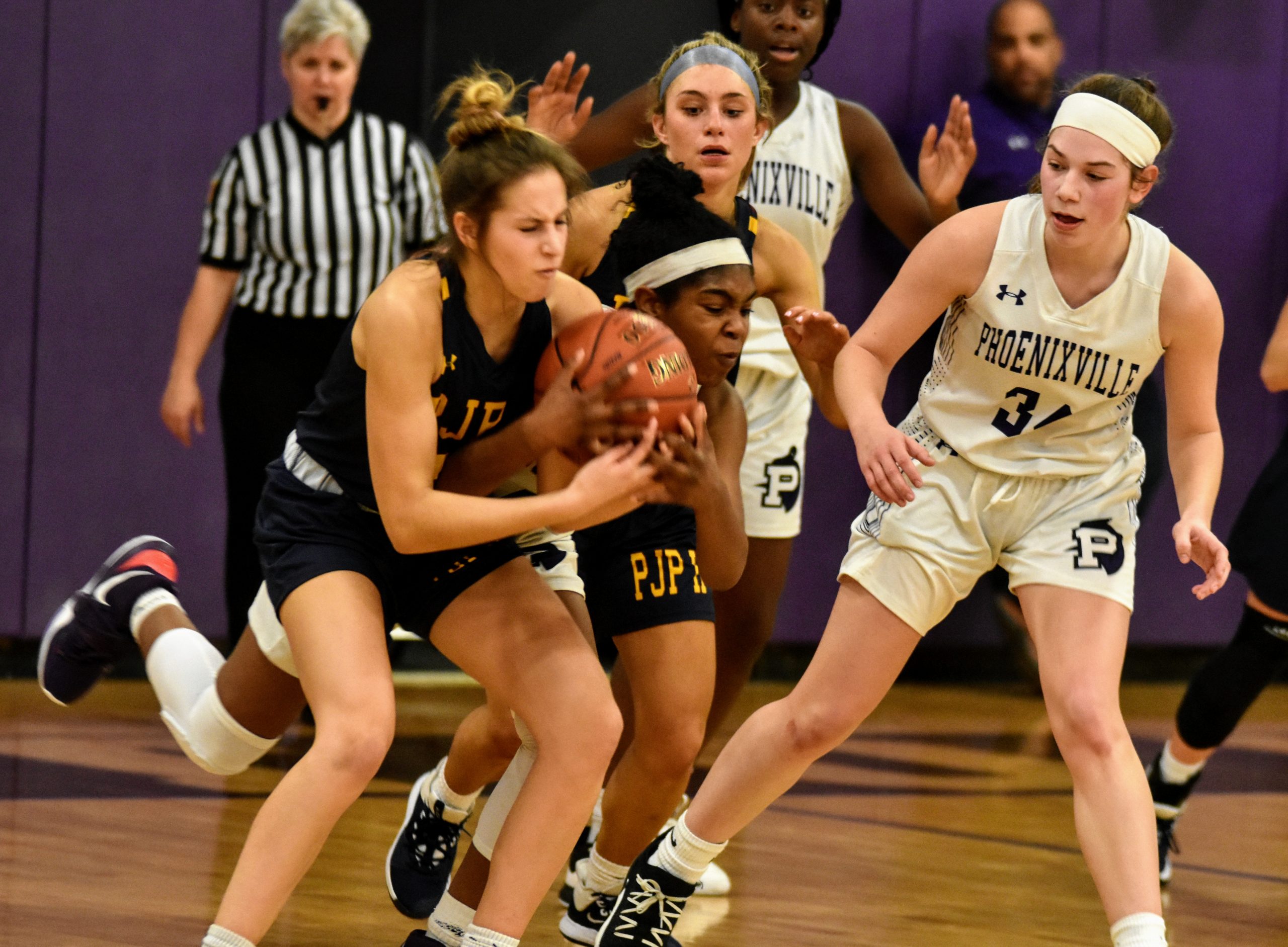 Phoenixville >> For the Pope John Paul II and Phoenixville girls basketball teams, it all came down to the final game of the season in the quest to qualify for the Pioneer Athletic Conference Final Six playoffs.

The Golden Panthers and Phantoms battled Monday night in a makeup game to decide the second-place finisher from the Frontier Division.

Both sides gave it all they had in terms of effort and fight. But in the end, Pope John Paul II erased a seven-point deficit in the final 7:29 of the fourth quarter and beat Phoenixville, 38-35, to clinch second place in the division and the accompanying playoff berth.

The Golden Panthers also had to rally to win the first meeting between the two schools in Upper Providence to take that victory in the closing minutes of the fourth period.

Sophomore guard Tess Crossan scored 15 points and sophomore guard Amelia Kennedy scored 11 to pace the scoring for the Golden Panthers, who will face Owen J. Roberts in the first round of the PAC playoffs Thursday night at Spring-Ford High School at 7:45 p.m. in the second game of a doubleheader.

“We really pulled together in the second half,” said Crossan. “We always rely on our defense to carry us, but we had to compete and played a complete game. We came together as a team. All five of us really wanted it.”

PJP coach TJ Lonergan has emphasized every game being so important in the race for the PAC and District 1-5A playoffs for the past several weeks. His players have responded to that call and will join unbeaten Frontier winner Pottsgrove as the playoff representatives from the division.

“The PAC playoffs have always been our goal and districts, too,” said Crossan. “We had to make a run. We didn’t want to stop.”

“We’ve been fighting for our playoff life in the last two, two and a half weeks,” said Lonergan. “We saw what the PAC and district power rankings looked like. It was survive and advance for the playoffs.”

Phoenixville (12-10 overall), which had a winning season in head coach Brian Grashof’s first  year at the helm, held the upper hand in the early going and for most of the game.

Led by the junior trio of Breisblatt, Nailah Green and Angelina Williams, the Phantoms took a 9-3 lead at the end of the first period.

The Phantoms had a 30-23 cushion heading into the fourth quarter.

“We were able to keep pushing through,” said Lonergan. “I think that was the big difference.”

A basket by junior Kayla Ciuba (six points) started PJP’s comeback in the fourth quarter. Crossan and senior guard Kayla Viney took down rebounds before Crossan made a driving layup at the 6:11 mark to cut the gap to 30-27.

Kennedy made a steal and knocked down two free throws at 5:51 to make it 30-29. Junior forward Haley Jackson had a blocked shot and rebound for the Golden Panthers, leading to Crossan’s driving layup that gave PJP a 31-30 lead with 4:57 left in regulation time.

Green grabbed a rebound, and Breisblatt converted three free throws to put the hosts back in front at 33-31 with 4:03 showing. Williams had a big rebound, and she made a layup with an assist from Sammy Brown that allowed Phoenixville to lead 35-33 with 2:51 left in the fourth period.

Kennedy had a foul shot and steal with less than two minutes left. Crossan made another drive to the basket at 1:10 for a 36-35 PJP lead.

After a PJP 30-second timeout, Jackson pulled a rebound, followed by two Ciuba boards in the final 38 seconds. Ciuba also sank two foul shots with 26 seconds left for a 38-35 lead.

Breisblatt and Green had rebounds for the Phantoms at the end of the game. Before the final horn sounded, Phoenixville tried a 3-point shot that would have tied the game, but it missed the mark.

Notes >> Guard Mary Kate Shannon and Viney are the Golden Panthers’ two seniors. The rest of PJP’s players are sophomores and juniors. … “We’re relatively young,” said Lonergan. … The same goes for Phoenixville, who has two seniors in Marlee Brown and Atia Hall.