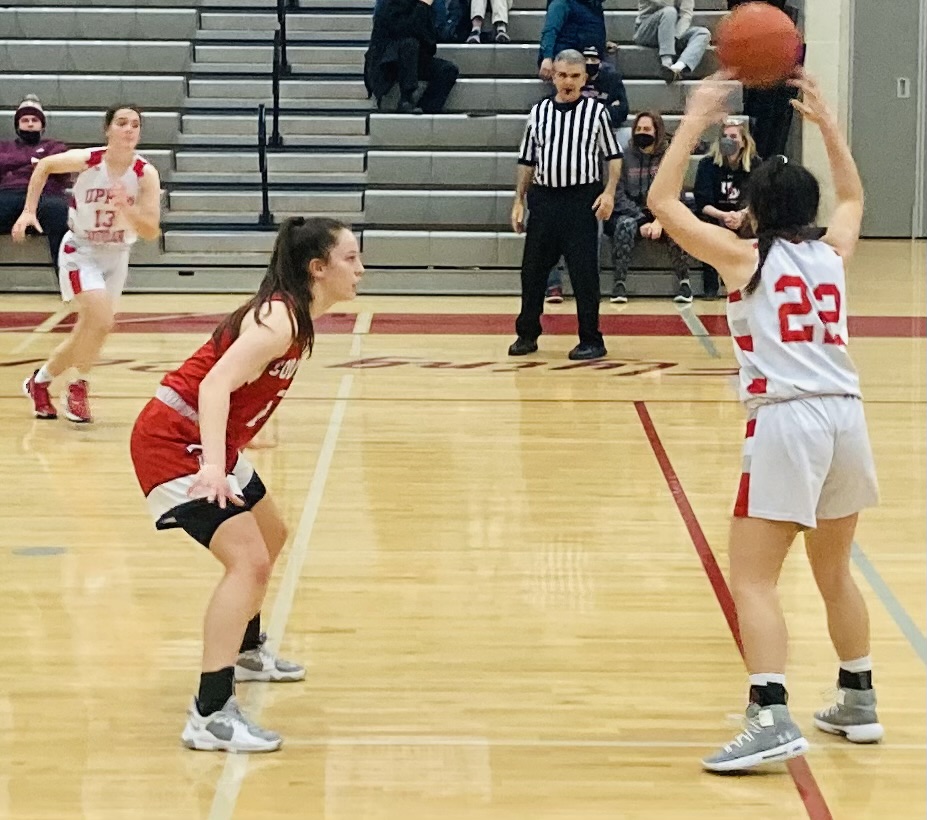 UPPER DUBLIN >> After a fast start and an early cushion, Plymouth Whitemarsh found itself in a fog, but saw its way through.

“That game, at the end, was really all about us picking each other up,” Erin Daley said of Thursday night’s contest with Suburban One League Liberty Division rival Upper Dublin. “We had to come together as a team. Everything was kind of coming apart, but I think with the team bond that we have, we were able to pick each other up. And that’s how we got through the end of that game.”

The Colonials finished as they had started, pulling away to a 47-28 victory on the road to raise their unbeaten record to 7-0 overall and 4-0 in the Liberty. The Cardinals, led by Amy Ngo’s 10 points, are now 3-5 overall, 1-3 in the Liberty.

“(We had a) strong start, and I think that was the fire coming off of our win on Tuesday,” said Daley, speaking of the 52-21 win over the Cards. “Upper Dublin’s our rival and we always wanna beat them and I’m sure they always wanna beat us. We knew we had to come out on top and that’s what we did. Right from the start.”

The defense pressed and the Colonials were in control.

“The pace was what we wanted,” Colonials coach Dan Dougherty said.

Lainey Allen battled inside and helped push PW to a 28-13 lead at the break.

But then things began to unravel in the third quarter for the visitors.

“It was just bad execution offensively and defensively. We had poor decision making in the half-court offense. But ultimately, the kids made plays to win the game,” Dougherty said. “Erin Daley made a couple really big plays there. Jordyn Thomas, Lainey Allen really made some big plays. I thought Abby Sharpe kind of carried us in the first half and then the rest of the team picked it up in the second half.”

Coach Dan Dougherty and Plymouth Whitemarsh looks on during their game with Upper Dublin on Thursday, Jan. 6, 2022. (Kev Hunter/MediaNews Group)

Allen had key baskets in the fourth and finished with 12 points. Thomas hit a three with two minutes to go to cement the win for the Colonials.

“We have such a strong bond. The five starters have been playing together for three years now,” said Daley, who had three of PW’s five 3-pointers. “I think we’re an all-around good team – everyone has strengths. And everybody has weaknesses, but the other players pick up those weaknesses and make them better. That’s how we execute everything so well.”

The Colonials stalled the ball early in the fourth, forcing Upper Dublin into man-to-man defense, and PW’s size advantage loomed large down the stretch.

The Colonials also tightened things up at the defensive end, after Upper Dublin had built some momentum in the second and third quarters.

“The game on Tuesday at our place was not great defense. Upper Dublin was missing shots. And tonight, Upper Dublin made some shots,” Dougherty said. “They’re a good shooting team.

“You play a Morgan Funsten-coached team twice in three days, and the second game is gonna be really difficult.”