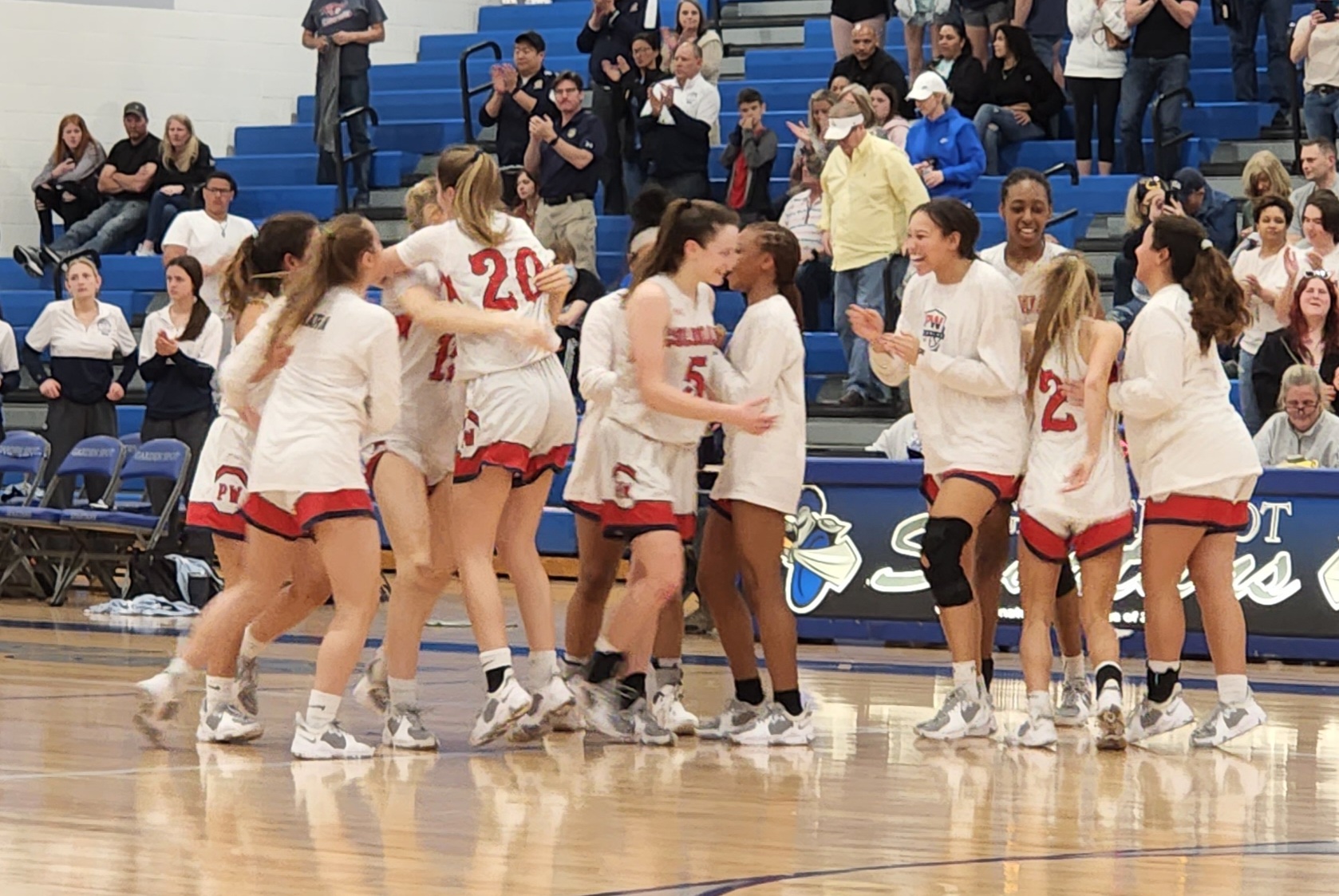 When the doors opened, assistant coach TJ DeLucia announced the senior point guard’s arrival and the team erupted in celebration.

The Colonials are going to Hershey.

Plymouth Whitemarsh remained undefeated with a 48-35 win over (3-3) Cedar Cliff in the PIAA-6A semifinals at Garden Spot High School. The District 1 champions will face (7-1) Mt. Lebanon in the state title game Saturday at 5 p.m. at the GIANT Center.

“(Hershey) has been the goal,” Flanagan said. “We would’ve been proud however far we came, but obviously we would’ve been disappointed. We want to go all the way. It just feels great. We’re really pumped.”

Flanagan played all 32 minutes against the Colts and finished with 15 points, four rebounds, three assists and one block. The Holy Cross commit made her presence felt from the opening tip to the final whistle.

“She’s going to Holy Cross for a reason,” PW head coach Dan Dougherty said. “A lot of coaches and people in the know know how talented she is, too. If she’s not a first team All-State kid then I don’t know who is beating her out for that because you don’t have to score 20 points a game to win a game. She can… She just dominates the game as a point guard. You want to overplay her? I’ll dish to Lainey (Allen), dish to Erin (Daley). It’s fun to watch.”

The Colonials took control of the game with a 6-0 run in the first quarter to extend a 6-5 lead to 12-5, an advantage that never dropped below five points the rest of the game. After two Abby Sharpe free throws started the run, Flanagan grabbed an offensive rebound and dished to Erin Daley, who found Lainey Allen for a backdoor layup. The next trip down the floor, Flanagan found Allen herself to make it a seven-point PW lead.

Cedar Cliff (29-2) trimmed its deficit to five once the rest of the game – when Sydney Weyant hit a three-pointer on the first possession of the second quarter, making the score 16-11. Flanagan immediately answered with a corner trey to get the lead back to eight.

In the fourth quarter, Flanagan scored nine points. She found Allen early to extend a nine-point lead to 11 and went 5-for-6 from the free throw line in the final 2:03 to close out the win.

“What you need to win games like this where it gets loud out there,” Dougherty said, “you need a coach on the floor. (Flanagan) knows what everyone is supposed to do, she tells everyone what to do. It won us the game in the second half.”

Daley and Flanagan had back-to-back baskets in the fourth quarter to give the Colonials (33-0) some breathing room.

Allen’s early fourth-quarter basket gave PW a 35-24 lead with 6:40 to play. The Colts responded with four straight points before Dougherty called timeout. Out of the timeout, Daley drove down the right side of the lane for a layup and 37-28 lead, ending a 2:50 scoring drought.

“I’ve gotten that specific play a couple times,” Daley said. “It’s usually with Jordyn (Thomas), but I said to Lainey, ‘I’m going to cross-keep it.’ We practice it all the time and I know on the inbound they were so used to fighting over the screen because they wanted to trap the ball. I knew in my mind it was going to be there so I went for it.”

“I can’t take credit for anything there,” Dougherty said. “We’re running our basic man-offense there, which is just a lot of reads. Erin Daley just makes the perfect read, keeps it, scores a layup out of it. Then a lot of times what teams try to go against us – they start being super aggressive on Kate, super aggressive on Abby, ball gets passed backwards, attack the basket and finish through contract. It was a physical game. I thought we finished through contact very well.”

The next PW possession, Flanagan made a tough layup under the basket to extend the advantage to 39-28 with 3:13 to go.

.@Kateflanagan53 extends the @PWHSGirlsBBall lead to 11 with 3:13 to go. Flanagan had 9 points in the 4Q. pic.twitter.com/rztXVtehAW

Flanagan and Allen each hit two free throws over the next few possessions to make it an 8-0 PW run and 43-28 lead with under two minutes remaining.

Flanagan removed any doubt with a steal and breakaway layup to put PW ahead, 48-33, with one minute to go.

“Senior year states,” Allen said. “That’s unbelievable to me. I’m just so grateful that we’re able to experience this and have our hard work finally pay off over the last four years.”

Sharpe and Allen joined Flanagan in double figures with 15 and 12 points, respectively. They combined for 14 of the Colonials 16 first-quarter points and Allen added 12 rebounds for a double-double.

“We were really pumped up coming into this game,” Sharpe said of the fast start. “We’re so close. We really wanted this. Before the game we said we just have to play our game and we like to play fast, we like to play in transition, get the ball up and I think we did a really good job of rebounding the ball especially and then looking up right away. That gave us those fast breaks and a little bit of an early lead, which gave us great momentum going into the rest of the game.”

Fiona Gooneratne started for PW, which was missing senior starter Jordyn Thomas for the second straight game with a non-COVID illness, and played all 32 minutes.

“It shows we’re really well-rounded,” Gooneratne said of PW winning despite missing a starter and Allen and Daley facing foul trouble. “We can sub in and out various different people and we’re still able to keep the same intensity. Everyone is always ready to step up. (Angelina) Balcer gave great minutes coming off the bench.”

Olivia Jones led Cedar Cliff with 20 points. The freshman was the only Colt to score more than four points.

After a back-and-forth second quarter, PW went to halftime with a 25-16 lead. A 6-0 third-quarter run – capped by a Sharpe and-one and a Sharpe steal-turned-layup – gave the Colonials a 33-19 lead late in the third quarter. After Daley picked up her third and fourth fouls at 2:00 and 1:55, respectively, Cedar Cliff’s Jones finished the quarter with four straight points to get the Colts within 33-24 with eight minutes to play.