Plymouth Whitemarsh powers past CB East in District 1 6A semifinals 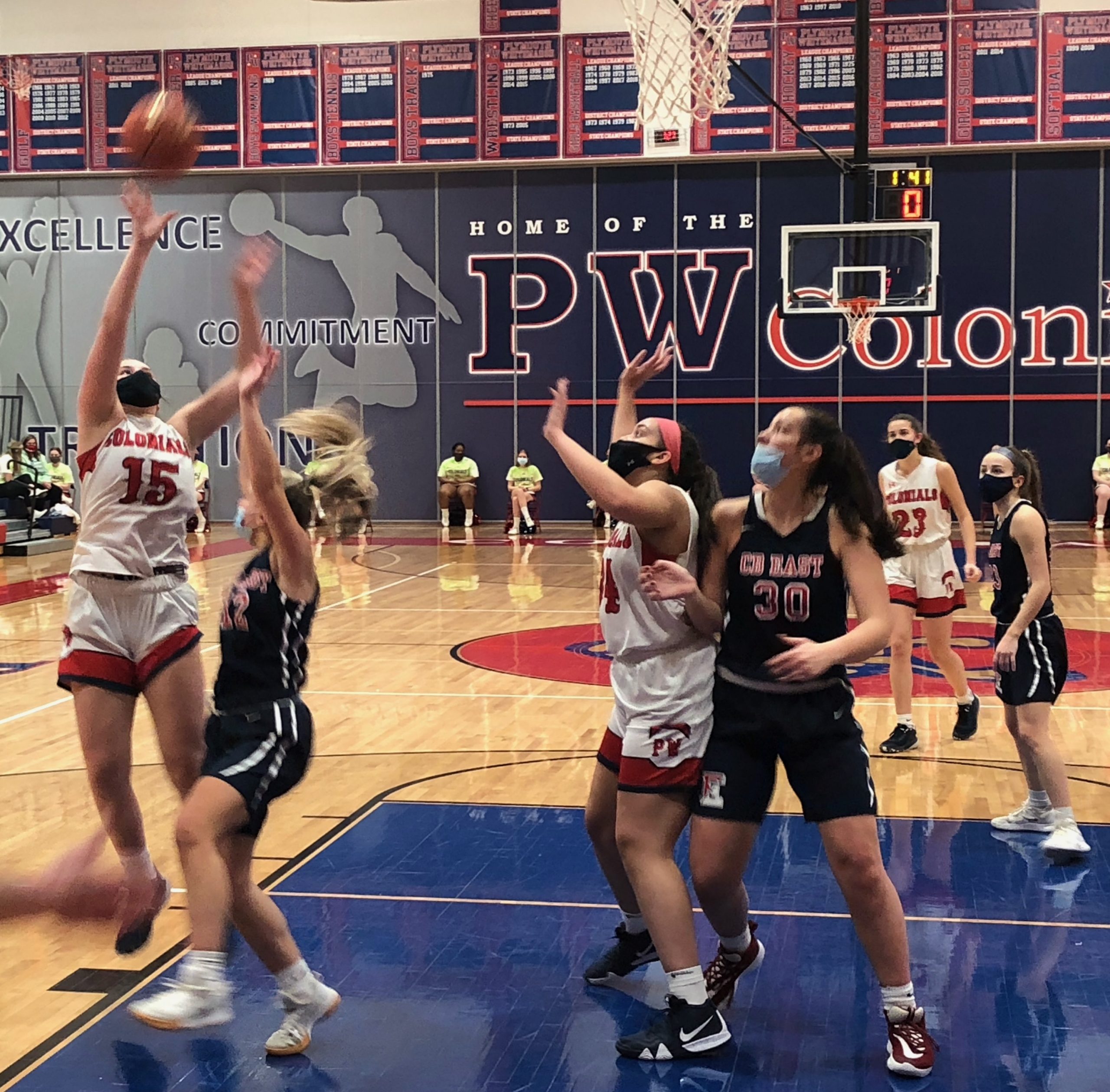 WHITEMARSH >> If Plymouth Whitemarsh needed any reminder its floor leader was back, Kaitlyn Flanagan provided it quickly.

The Colonials’ junior point guard missed their regular season meeting with Central Bucks East and it was a notable absence as the Patriots went on to hand PW its sole loss of the season. With No. 3 seed East visiting in the District 1-6A semifinals on Wednesday, Flanagan and the No. 2 Colonials wanted to make sure it wasn’t a repeat performance.

Flanagan keyed a fast start as PW rolled to a 50-19 win against East, earning its first trip to the District 1 final since 2017.

“It was really hard to watch the first game and we were much more prepared for their defense this time,” Flanagan said. “We came out ready to go.”

CB East (16-2) scored the first point of the game and didn’t score again until the second quarter while PW (18-1) went on a 13-0 run over the last 7:27 of the opening quarter. Flanagan assisted the first two baskets, a 3-pointer by Jordyn Thomas and an inside score by Anna McTamney, then got a layup off a feed by McTamney and ended the frame with an and-one on a driving layup.

The junior finished with seven points and three assists, but PW didn’t need her to score big. Instead, everyone got in on the act as the Colonials shot a blistering 11-of-17 from the floor in the first half and 5-of-6 from behind the arc.

On the other side, East missed its first nine attempts before Elise Duffy broke the drought but the visitors couldn’t buy a shot with a 3-of-19 first half.

“I said to (East coach) Liz (Potash) sometimes it’s a make or miss game, they couldn’t make and we couldn’t miss but there’s a difference shooting in your own gym,” PW coach Dan Dougherty said. “This is why you work hard all season to have a home court advantage like this. We took a bunch of shots we practice every day.”

PW assisted eight of its 11 first half field goals and thanks to a monster second quarter by Erin Daley, didn’t slow down off its strong start. The 6-foot forward either scored or assisted all but three Colonials points in the second quarter as the hosts built a 31-8 advantage at halftime.

Thomas led the Colonials with 16 points off another strong postseason performance and had 12 at the break thanks to a perfect 4-of-4 effort that included a trio of 3-pointers. Daley finished with an all-around strong game scoring nine points, grabbing five board and doling out six assists as the Colonials helped on 14 of their 17 field goals in the game.

“We needed to show them that wasn’t the team we are,” Daley said. “We had to come out strong, handle their pressure and execute, which is what we did. It’s something we practice every day, those are in-rhythm shots for us and that’s why we hit them.”

The first time around, PW also led at the break before coming undone in the second half so the Colonial players weren’t resting on 16 good minutes. While they didn’t have to do anything fancy, the Colonials executed what they needed on offense and continued to defend well against East and its top players in center Emily Chmiel and point guard Mia Salvati.

“It’s amazing, I feel so lucky to play on a team where everyone contributes and it never has to fall on one person,” Flanagan said. “People step up and have their big games, but everyone is always there ready to be a team player.”

East’s season came to an end due to the nature of this condensed postseason. The Patriots still had a good winter, going undefeated through the SOL Colonial Division and reaching the final four in the Class 6A bracket and Chmiel, a Chestnut Hill recruit, surpassed 1,000 career points.

Plymouth Whitemarsh’s last trip to the district title game came in 2017 but the program’s last district title came back in 1983. It’s the first final experience for any player on this year’s roster but as Dougherty noted, they’ve already surpassed where they were at when last season came to an unexpected halt.

Waiting for the Colonials is top-seeded Spring-Ford, a 47-29 winner over the short-handed No. 4 Upper Dublin. The district final will be played Friday night at Spring-Ford.

“We get one day, then it’s Spring-Ford at Spring-Ford,” Flanagan said. “We can celebrate now, but as soon as we get home, it’s right to film and we’ll try to prepare as much as we can.”

THE DALEY SPECIAL >> Erin Daley was just along for the ride last postseason.

An injury sidelined the talented sophomore during last year’s District 1 and PIAA playoffs prior to the season being shut down, so she’s making up for it this year. Daley, who plays AAU for the Comets program in Delco, has given the Colonials a little bit of everything this season on both ends of the floor.

Wednesday, she hit all four shots she took to compile nine points and passed the ball extremely well for a team-high six assists.

“Having Kaitlyn back was a big deal, but Erin was the difference,” Dougherty said.

Daley had a quiet first quarter, but was the catalyst in PW’s 18-point second quarter. The 6-foot forward scored four points in the frame, but assisted three baskets that added up to 12 more points while also snaring two boards.

A willing passer, Daley said she was prepared for East to send help defense when she had the ball and made a couple good dishes out of double-teams on Wednesday. She credited the team’s leaders for making her first postseason minutes no different than any others.

“This is my first district experience but our seniors Anna and Coop, they show us the level of confidence we need to have,” Daley said. “We follow them, so if they’re there, then we’re all going to be there with them.”

Flanagan, who also plays AAU with the Comets, said Daley has evolved her game in every aspect this season and has been impressed with the sophomore ability to defend smaller guards as well as she defends taller post players.

“She’s always had that aggressive, get to the basket mindset, but now she’s more of a threat,” Flanagan said. “She had all those assists tonight, she’s developed her entire game and you never know what she’s going to do if you have to defend her.”