Plymouth Whitemarsh in state Final Four for first time since 1985 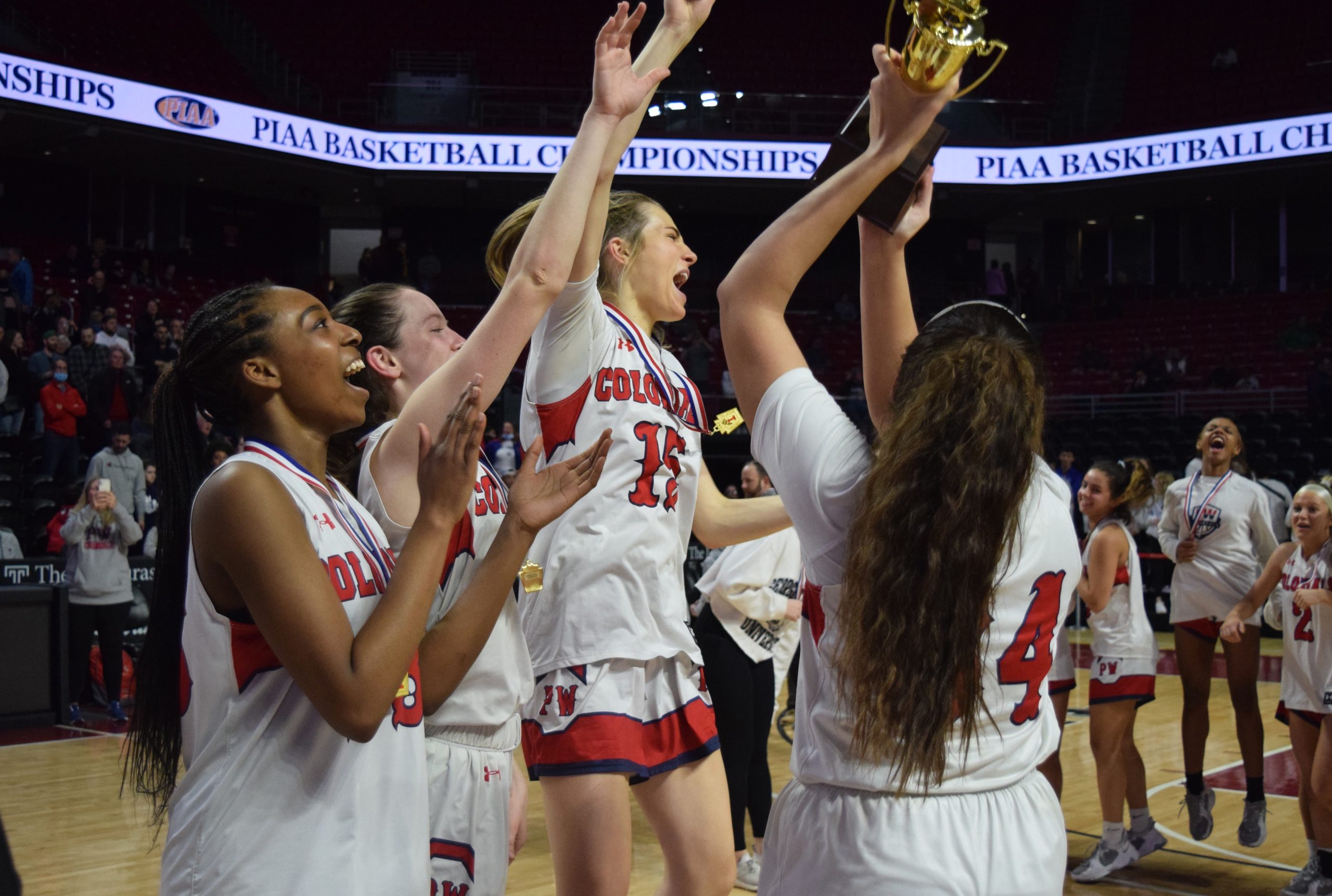 Plymouth Whitemarsh's captains celebrates as they receive the District 1 trophy after defeating Spring-Ford in the final on March 5 at Temple. (Austin Hertzog/MediaNews Group)

The accolades keep adding up for the Plymouth Whitemarsh girls basketball team.

The undefeated Colonials have a school-record 32 wins. They won the Suburban One League Liberty Division title and the program’s first SOL Tournament championship. A top 25 team in the country according to MaxPreps, they won the District 1-6A championship and reached the state quarterfinals for the fourth time ever.

After beating Perk Valley, 56-31, in the PIAA-6A quarterfinals Tuesday, Plymouth Whitemarsh is in the Final Four for the second time ever and first time since 1985.

“We have the, ‘Just win today’ mentality,” PW coach Dan Dougherty said. “There’s only one way for this to end happy now – it’s to win it all. We just take it one at a time. We just enjoy being with each other. We had a study hall together (Tuesday). The kids just enjoy being together. We try not to put too much emphasis on ‘Oh my gosh we’re only two games away’ or one game away. We hardly ever talk about being undefeated. We didn’t share the national ranking thing with them until after the (second-round) game. It’s not who we are. It’s an amazing honor to be there, but — yes, we want to win a state championship so, so badly, but then we tell the kids it doesn’t define who you are as people. What you’ve accomplished already – you’re already the greatest girls team we’ve ever had. Your legacy is set. Now it’s up to you to get that prize that you’ve worked so hard for four years to try to get.”

“It’s crazy being in this spot as it is,” PW junior guard Abby Sharpe said. “I think we all definitely want it very bad and to be a part of school history is really cool. We want to take it all the way and so I think just being in this spot and having this opportunity will give us the extra push to continue and make history for this school. It’s really exciting for all of us.”

Up next for the Colonials is a semifinal matchup with District 3 third-place finisher Cedar Cliff. The Colts have defeated three Greater Philadelphia Area teams in the state playoffs to get to this point – 36-27 over Haverford, 47-44 over Archbishop Carroll and 42-36 over Pennsbury.

Plymouth Whitemarsh, which defeated Haverford and Pennsbury twice this season and Archbishop Carroll once, tips off against Cedar Cliff at 7 p.m. Friday night at Garden Spot High School.

Cedar Cliff is 29-1 this year. The Colts only loss came in the District 3 semifinals, 41-38, to Central Dauphin, which is playing in the other semifinal against Mt. Lebanon.

Cedar Cliff’s Olivia Jones, a 5-foot-10 freshman who plays all over the court, scored a game-high 13 points against Haverford. Against Carroll, she posted a double-double with 19 points and 10 rebounds. She added 13 points, six boards and four assists against Pennsbury while junior guard Taylor Ferraro scored a game-high 18 points.

Plymouth Whitemarsh has the size to matchup with Jones.

Senior forwards Lainey Allen and Jordyn Thomas are listed at 6-foot-2 and 6-foot-1, respectively. The Colonials are hopeful to have Thomas on the floor after she missed Tuesday’s game with a non-COVID illness.

Junior wings Erin Daley and Sharpe stand 6-foot and 5-foot-11, respectively. Daley has taken the challenge of defending the opponent’s best player all season, whether it’s on the perimeter or in the post.

The winner will get plenty of rest before next Saturday’s state championship game at Hershey’s GIANT Center against the winner of (3-1) Central Dauphin and (7-1) Mt. Lebanon at 5 p.m.