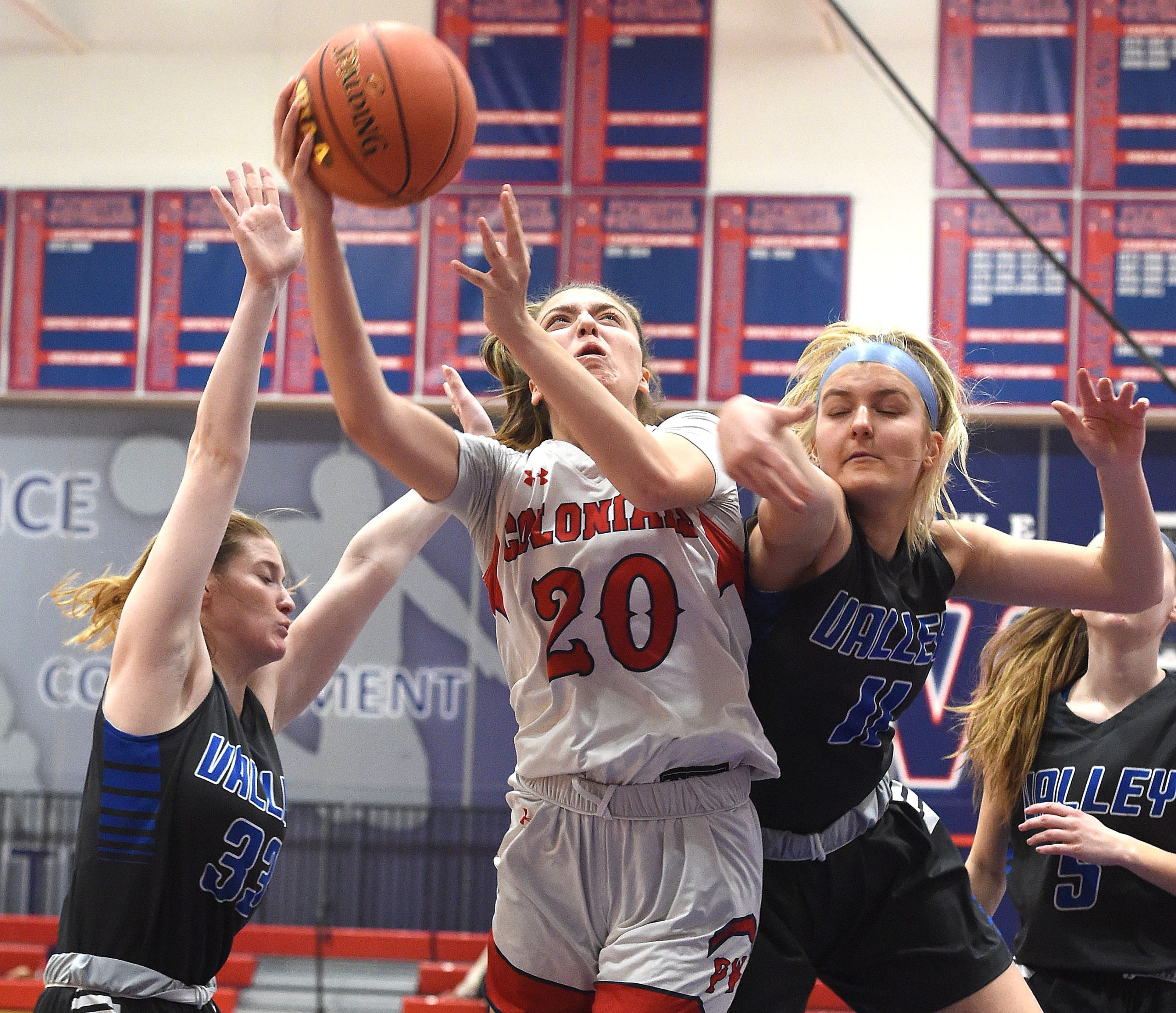 Plymouth Whitemarsh's Abby Sharpe (20) shoots between Great Valley's Grace Curley (33) and Gia Sioutis (11) in the first quarter of their District 1-6A second round game on Wednesday, Feb. 23, 2022. (Pete Bannan/MediaNews Group)

The Colonials stayed unbeaten, clinched a state playoff berth and advanced to the district quarterfinals with a 53-9 win over No. 16 Great Valley at Plymouth Whitemarsh High School.

“This is this group’s 21st playoff game over the past four years,” PW coach Dan Dougherty said. “I thought that really showed tonight and we saw it in practice the last couple of days, too. Following the SOL Tournament we had two really good practices and then we gave the girls off for the weekend and they did a team bonding trip and came back even closer than they’ve been for three and four years. Tonight, just watching them come out and having a nice crowd… Everyone was just calm. It felt like it was a regular game. There was no nerves.”

PW’s defense set the tone immediately. After Lainey Allen scored a basket on the opening possession, the Colonials got into their full-court pressure. Kaitlyn Flanagan deflected Great Valley’s initial inbounds pass out of bounds. The next inbounds pass went into the corner, where the PW defense smothered the ball-handler and forced a timeout just 39 seconds into the game. The Patriots first possession eventually ended with a turnover.

“(That start) gets me excited for sure,” Allen said. “It gets us pumped up and our adrenaline is rushed up. Everyone is all over the place and it just makes us more excited to play. Especially me, I love starting off with a strong start and getting ahead faster than usual.”

It’s what the Colonials (26-0) defense did later in the game that was truly impressive. After allowing a Great Valley basket make it a 19-7 game early in the second quarter, PW posted a shutout for the next 22:44 until there were 50 seconds left in the game and the Suburban One League Liberty Division champs held a 53-7 lead.

“The defense was just special tonight,” Dougherty said. “I know Great Valley is a young and inexperienced team, but our defense tonight was fun to watch for people that love defense.”

“Defense is a big thing that we focus on,” PW’s Abby Sharpe said. “We spend a lot of time in practice and we scout their plays, we watch film. We just make sure we’re coming to the game really prepared. Also, communication. We know what’s coming and then we communicate that on the floor. That’s how we execute it so well. I think we’ve just gotten better and better as the season’s gone on.”

“They’re athletic, they’re aggressive and they’re smart,” Great Valley coach Alex Venarchik said of the PW defense. “They’re a smart team. It’s not easy to be switching on everything. They’re constantly communicating, getting girls in the right spot out on the court. You can see they work a lot on it. They’re just a really well-balanced team.”

Plymouth Whitemarsh’s Erin Daley (15) in the first quarter of the Colonials’ District 1-6A second round game against Great Valley on Wednesday, Feb. 23, 2022. (Pete Bannan/MediaNews Group)

With Allen standing 6-foot-2, Jordyn Thomas 6-1, Erin Daley 6-0 and Sharpe 5-11, PW used its size to its advantage against Great Valley. The Colonials won the rebounding battle, 37-14, and made 17 of their 19 field goals from inside the three-point line.

“We knew they did not have the size in the paint,” Allen said. “We got up there for every board, no matter if we were in the post or not. We have all-around size on our team, so we try to use that to our advantage against every team.”

Allen scored a game-high 15 points and grabbed 12 boards. Sharpe added 14 points while Thomas and Daley each added seven. Daley pitched in on the glass with 11 rebounds.

Great Valley (15-8) still has a chance to earn a state playoff berth. The Patriots will head to the play-back bracket to compete for one of the four remaining District 1 spots in the PIAA-6A playoffs. They face Downingtown East at 6 p.m. Friday.

Plymouth Whitemarsh’s (5) Kaitlyn Flanagan (5) comes in to shoot against Great Valley in the first quarter of their District 1-6A second round game on Wednesday, Feb. 23, 2022. (Pete Bannan/MediaNews Group)

Plymouth Whitemarsh returns to the state playoffs after a couple of COVID-shortened runs.

The Colonials lost the District 1-6A championship game last season and only one team from the district went on to the state tournament. This year, 12 teams qualify for states.

In 2020, PW was still alive when the state playoffs were halted and ultimately cancelled due to the pandemic.

“It means everything,” Allen said. “We have a goal to get to states and we’re going to win states – that’s just been what’s in our head all season.”

“We’re definitely hungry,” Sharpe added. “What this team has gone through – I think it’s a common theme that’s made us closer. We all share this one common goal to get all the way into states. We’re on the right track so far and we’re just staying hungry and we’re staying focused. We’re going to give it our all every game. We’re all super excited about it and I think there’s big things coming for us.”

Dougherty was an assistant with the program in 2010 when the team’s goal was to make district playoffs. He noted how far the team has come that they didn’t even mention clinching states in their postgame talk Wednesday.

“Here we are 12 years later and we didn’t even talk about the fact that we made states,” he said. “This team wants multiple championships. They won the league and they won the SOL. They want a district championship and they want a state championship. You can’t win states until you qualify for states, so it’s great to have gotten in there, but they definitely have bigger goals. They know from the heartbreak of year’s past that you can’t look too far ahead.”

Plymouth Whitemarsh’s Lainey Allen (33) shoots against Great Valley in the first quarter of their District 1-6A second round gameon on Wednesday, Feb. 23, 2022. (Pete Bannan/MediaNews Group)

Taylor O’Brien, a 2018 PW grad and the school’s all-time leading scorer with more than 2,000 points, put her name into the Bucknell history books Wednesday night.

O’Brien scored 20 points in a win over Army to bring her college career total to 1,001 points.

“You watch (O’Brien) play and she’s faster bringing the ball up the floor than the D1 athletes running on the floor trying to get back,” Dougherty, who talks to O’Brien after nearly every game, said.

“The growth of her game – she’s become a defender, she finishes with her right hand, she has a mid-range jumper. It’s been special to see her progress. I’m excited for her and her team. The Patriot League is wide open.”