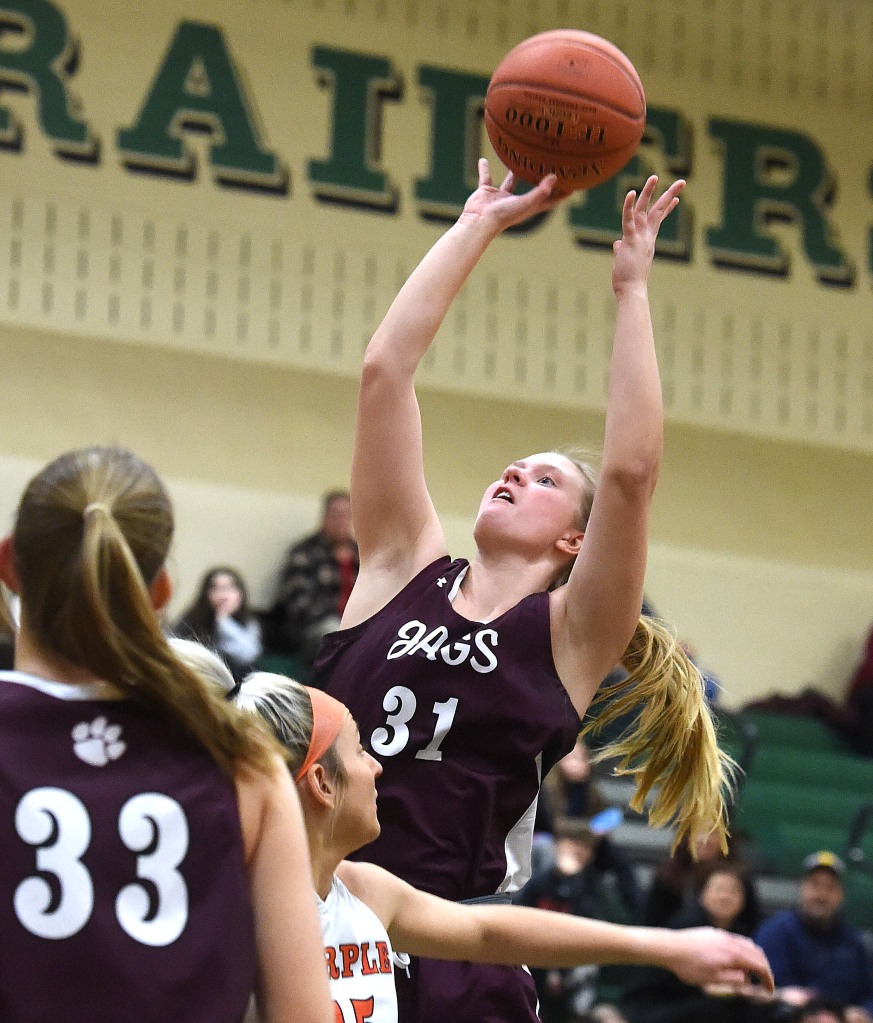 NORTHAMPTON — Garnet Valley’s season was coming to an end in the first round of the PIAA Class 6A tournament. Rather than hang their heads, the Jaguars found reason to celebrate with 37 seconds left in the fourth quarter.

They ran a special play involving co-captain and senior center Katelyn Dugery shooting from long distance, which is not her forte. She received a pass in front of the Jags’ bench, right around the elbow, and let it go. Swish city. Her first career 3-point basket.

Dugery couldn’t contain her happiness. Neither could her teammates.

“I guess you can say I’m the best shooter in the league because I’m 1-for-1,” Dugery said with a wry smile. “Nobody’s going to beat that.”

As for that other victory, District 11’s Northampton shot lights out from the floor and handed Garnet Valley a 56-43 defeat. The Jags finished the season with a 20-11 record and a Central League title.

Senior guard and co-captain Ava Possenti was happy to get Dugery her elusive first trey.

“We finally ran the play we always wanted to Kate and she hit it, so it was a good way to end the season,” said Possenti, who produced eight points, four assists and four steals. Speaking of hitting shots, the Konkrete Kids made plenty of them. All game long. Garnet Valley simply couldn’t keep up with Northampton’s eye-popping efficiency from long distance.

Led by 21-point outings from physical power forward Grace Lesko and shooting guard Kylie Gilliard, Northampton shot 64.5 percent (20-for-31) including 9 of 11 from beyond the arc.

“To be honest, we didn’t think they would shoot that well in the beginning of the game,” Possenti said. “We thought they were going to cool down in the second half. And we told ourselves to have fun. Whether it’s our last game or not, and that’s what we did.”

Northampton led 20-10 after eight minutes and by as many as 16 points in the second period. GV made a run in the third quarter, but could never get closer than seven points.

Sophomore forward Emily Olsen scored seven of her game-high 13 points in the third, including a hit on a nice post-up move to cut the GV deficit to 37-30 with 3:20 left. Just when the Jags started to build momentum, the K-Kids went on a 7-2 run in the fourth quarter and pulled away for good.

“We tried to get after them and defend because you knew if they got even the smallest bit of open space, they were going to knock down that shot,” said Olsen, who produced 13 points and six rebounds. “They had good shooters.”

The Jags had freshman Haylie Adamski in their thoughts. Adamski, who had a wonderful rookie season, underwent ankle surgery Tuesday and couldn’t be with the team.

“We were playing for her and wished she was with us,” Possenti said.

GV turned a rebuilding season into something special. The team won its first Central League title since 2019 as the No. 5 seed, went to the district quarterfinals and advanced to the state tournament.

The bow on top was Dugery jumping for joy after sinking her first 3-pointer. Not a bad way to go out.

“It was the cherry on top of our season,” Olsen said.