PIAA Class 5A Girls Basketball: Welde was a protective brace on floor when O’Hara needed one 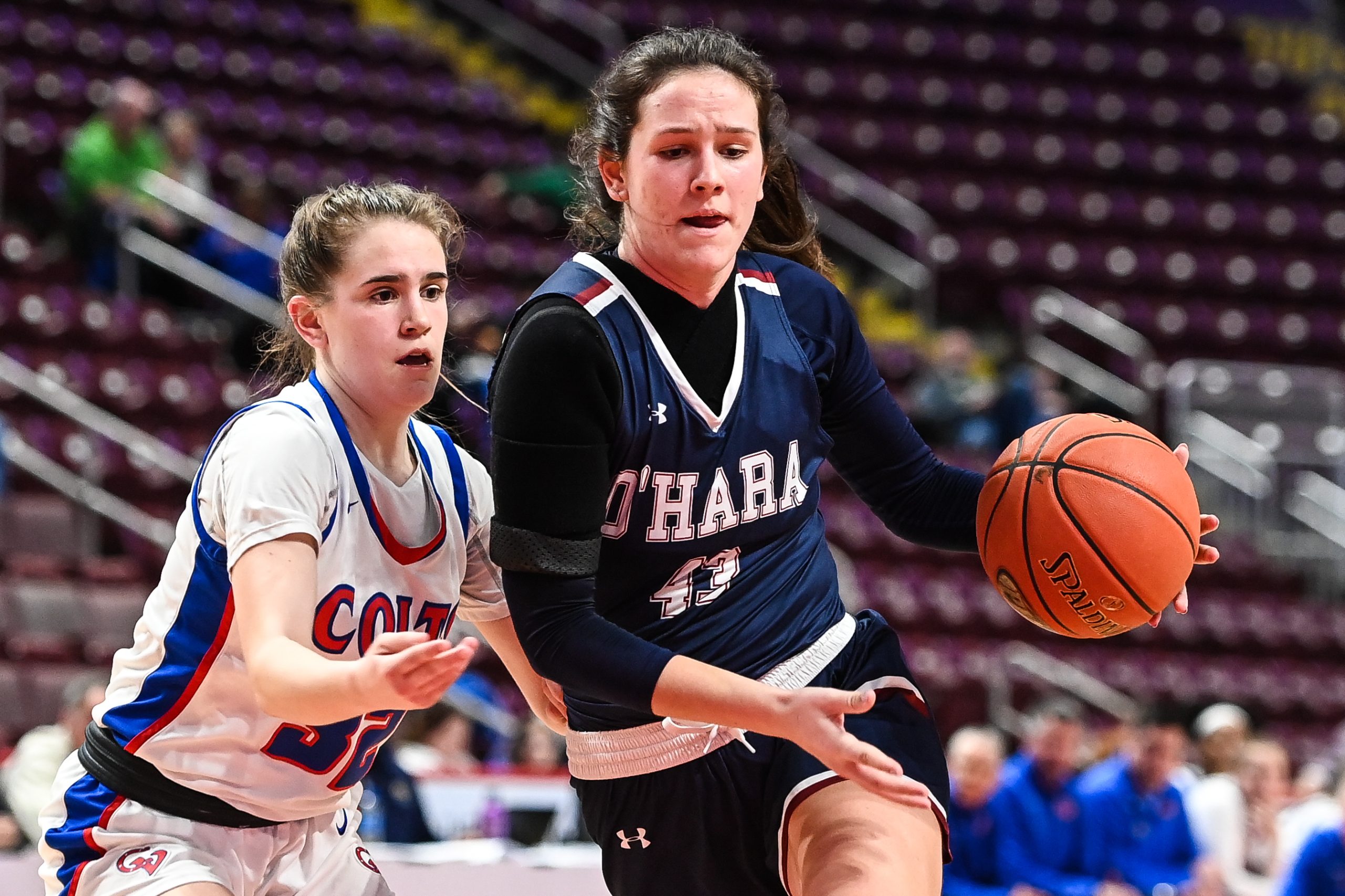 The Cardinal O’Hara senior’s older sister, Erin, is a 2019 graduate of the school. Erin was a senior leader for the Lions when Annie was a freshman.

James Welde is an All-Delco wide receiver and 2021 graduate of Bonner-Prendergast. He also played basketball and baseball and is a rising sophomore on the Villanova football team. The Welde siblings are the children of Jim and Meg Welde, who are Monsignor Bonner and O’Hara graduates, respectively. Both were hoops standouts in their heyday.

Annie Welde was a full-time starter at O’Hara, from the beginning of her junior year, and an integral member of the Lions’ back-to-back PIAA Class 5A championship teams.

In a family of basketball lifers, Annie Welde separated herself from the pack. She scored 11 points in O’Hara’s 42-19 victory over Chartiers Valley at the Giant Center Friday. She was a consistent source of offense during a first half in which the Lions struggled to find their groove. She had eight points by halftime, including a pair of 3-point field goals. The other bucket she hit came from the wing with one foot on the line.

Welde’s biggest moment came when she unleashed a shot from the top of the perimeter as time expired in the second quarter. Her long ball at the buzzer gave the Lions a 17-11 lead going into the locker room.

“We didn’t score as much as we would have liked and I think that that had made the game look much closer, with the score 17-11 at halftime,” Welde said. “Our coaches came in and told us they had a good feeling that if we can hold them to 11 points, even though we’re not scoring, we were all on the same page. We were able to kind of run with that, keep that solid and the shots finally fell in the second half like we knew they would.”

Welde was a little lucky to remain healthy during the Lions’ run at a second straight state title. The Lions won eight in a row to end the season, their only setback coming when Welde and senior guard Sydni Scott were injured against Plymouth Whitemarsh on Feb. 11. The Colonials, by the way, completed a perfect 34-0 season Saturday, defeating Mt. Lebanon for the Class 6A title.

In a nonleague game against Academy of Notre Dame on Feb. 8, Welde took a hard fall and injured her shoulder, forcing her to miss some time. She would wear a protective brace the rest of the season. But if there were any doubts as to whether she would return to full strength, Welde quickly quelled those concerns. Her defensive prowess, rebounding, post-up offense and long-range shooting were on display throughout the state tournament.

“I’m extremely happy for her and everything she has done this year,” said senior forward Maggie Doogan, who registered game highs in points (12), rebounds (eight) and assists (five) against Chartiers Valley. “I knew coming into the season that she was going to have a big role. Her getting hurt in that Notre Dame game kind of all made us catch our breath. She came back in the (Archbishop) Wood game (in the Catholic League playoffs) and I didn’t have a doubt in my mind that she would be any less than what she was. She came back and she’s got that big arm brace, you can’t really miss it. She was great for us. That shot at the end of the half was huge. She’s just the best, she does everything that we ask and she’s just the best teammate to have.”

Coach Chrissie Doogan all season praised her top-four players – Doogan, Scott, Welde and freshman Molly Rullo – for their versatility on the floor. When Chartiers Valley challenged forwards Doogan and Welde to shoot from the outside with a 2-3 zone, the Lions embraced the test. They have been making teams regret their defensive strategy all season and Chartiers Valley was the latest – and last – to learn the hard way.

O’Hara shot 9 for 21 from 3-point distance; Chartiers Valley had an overall total of five made baskets. Welde led the way with three triples, Doogan and sophomore Greta Miller two apiece, and Scott nailed one.

“I have confidence in our (players) getting those shots, and even the ones we were missing were good looks,” Chrissie Doogan said. “(Chartiers Valley) did a great job taking away the paint. We couldn’t even dribble in the paint for the most part. You know, we had a couple unforced turnovers that don’t usually happen, so I was fine with the shot selection. There were a couple stretches where we shot maybe three or four 3s in a row and I said, ‘Alright guys, how about we get the ball once inside?’ But even getting it inside and then kicking it back out for the open look was good for us. We shoot a lot of 3s in practice, and I was happy with the way we shot the ball tonight.”

O’Hara handled Chartiers Valley in consecutive years. Last season it was a 51-27 trouncing. On Friday the Lions made PIAA history by allowing the fewest points in a girls state championship game. The first girls final was held in 1973.

“I’m still surprised that we held them to 27 last year, so to hold them to 19 this year is even more impressive,” Chrissie Doogan said.

O’Hara became the fourth girls team to celebrate a Catholic League and PIAA championship in the same season. The Lions captured the program’s 19th league title, and the first for seniors Doogan, Welde and Scott.

“For them to grow together has been special to watch,” Chrissie Doogan said. “It’s been a lot of fun. If one of them has a bad day at practice, the other one will send them a text and say, ‘Hey, we got this, it’s OK.’ Stuff like that. That kind of stuff goes behind the scenes that people know about, just the bond they have together. Them picking each other up and supporting each other no matter what has been really great to watch all these years.”