PIAA Class 5A Girls Basketball: Scott gets defensive, O’Hara gets going to cruise past Springfield 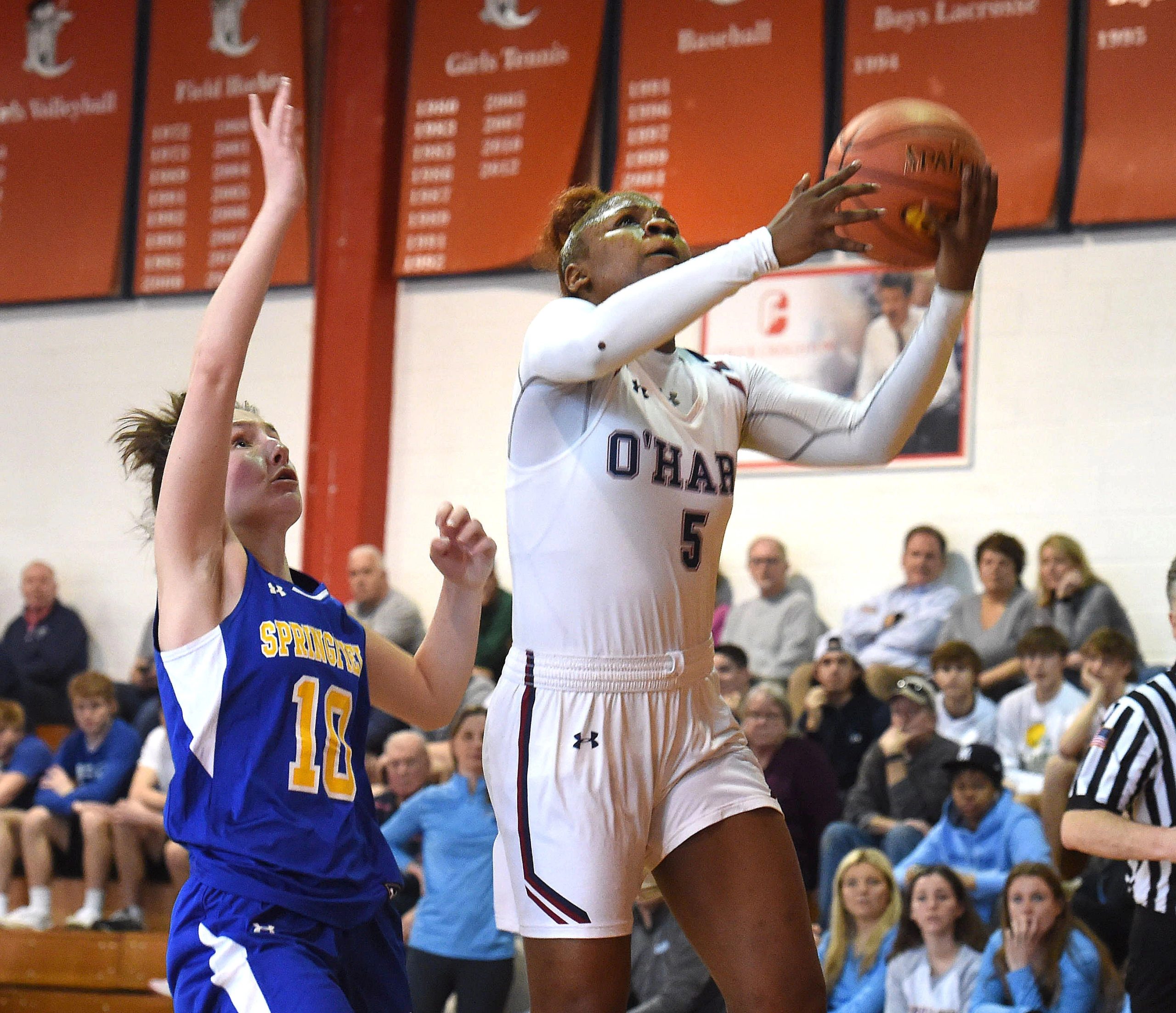 Cardinal O'Hara's (5) Snydi Scott goes to the basket in the first half as the Lions defeated Springfield in the PIAA 5A State playoffs Wednesday at Carroll High School. (PETE BANNAN - DAILY TIMES)

The teams met again Wednesday evening at Archbishop Carroll in the state quarterfinals. The Cougars didn’t shy away from the reigning state champions. They gave it everything they had, throwing the proverbial kitchen sink at the Lions. For one half, Springfield was within striking distance.

At some point during the second quarter, senior guard Sydni Scott had had enough. So the Marshall-bound guard began to create havoc with her defense and get the Lions moving in transition. Ultimately, the Lions would overwhelm the Cougars and cruise to a 38-22 victory, but District 1’s third-place team never backed down.

O’Hara advances to the semifinals to play District 3 champion Mechanicsburg Saturday at a site and time to be determined.

Cardinal O’Hara’s (5) Snydi Scott breaks up court after stealing a ball in the first half Wednesday. Scott and the Lions defeated Springfield, 38-22, in the PIAA Class 5A quarterfinals. (PETE BANNAN – DAILY TIMES)

After Springfield’s Molly Clifford banked a 3-pointer and Kaitlyn Kearney hit a free throw, the Lions clung to a four-point advantage in the second quarter. They closed the half on a 7-0 run, a rally that was ignited by Scott’s aggressive defense and crisp passing in open space. Scott scored four straight points in the blink of an eye, and Maggie Doogan, the 2021 Daily Times Player of the Year, scored her first basket right before time expired in the second quarter.

“We knew they were going to try to stall the ball, so once we got the ball back I wanted to start running with all five of us on the floor,” said Scott, who produced nine points, five assists and two steals. “We were not holding back at all. … This is our time to show what we can do, what we can improve on. We got our shots together, our rebounding together and our chemistry together. So I feel like we’re really comfortable and really coming together.”

Cardinal O’Hara’s Carly Coleman, left, steals a ball from Cora Fattori in the first half as the Lions went on to defeat neighboring Springfield in the PIAA Class 5A quarterfinals Wednesday night at Archbishop Carroll. (Pete Bannan – MediaNews Group).

Administrative forces not affiliated with O’Hara, the Catholic League or District 12 played a key role in the controversy surrounding a player’s transfer eligibility prior to states. The Lions were stripped of their District 12 title and all wins they accrued during the regular season due to what many consider a clerical error. That meant they went from being the district’s No. 1 team to its third-place qualifier in the state tournament. There will be a meeting of Catholic League honchos to determine whether O’Hara must vacate the 2022 league championship, which they won by trouncing Archbishop Carroll at the Palestra last month.

The Lions players, though, have done a good job ignoring the outside noise surrounding the issue as they continue to play their dominant brand of basketball. It didn’t matter if O’Hara had to travel to West York High School to beat up an overmatched squad from District 3 (Greencastle-Antrim) in the second round. And it doesn’t matter if O’Hara’s record on the PIAA tournament bracket reads “1-24.” The Lions remain a powerful force, one focused on running the table in the Class 5A tournament and claiming a second consecutive PIAA championship.

Cardinal O’Hara’s (43) Annie Welde goes to the hoop in the second half as the Lions defeated Springfield in the PIAA Class 5A playoffs Wednesday at Archbishop Carroll High School. (PETE BANNAN – DAILY TIMES)

“A lot of us have that attitude of, we don’t want to lose and we’re all on the same page no matter what,” senior forward Annie Welde said. “We’re willing to do whatever it takes. We played really good defense, especially these last few games, and we pride ourselves on that. We have different people scoring each night, and if we can defend the way we know how, I think we will be good. The majority of the team has been there last year and everyone knows what that felt like and how fun that was. We talk about what this means to get (the underclassmen) excited and ready.”

Freshman Molly Rullo and Doogan each scored 11 points to lead a balanced O’Hara attack. The Lions were smart and selective with their shots, converting 57.1 percent (12-for-21) of their field-goal attempts.

Doogan was one of several players to have issues with Carroll’s slick hardwood. Doogan tweaked her ankle in the fourth quarter and was removed for precautionary reasons. She was sporting an ice pack and walking gingerly after the game.

Springfield’s Mia Valerio is defended by Cardinal O’Hara’s Annie Welde, left, and Molly Rullo in the second half as the Lions defeated Springfield in the PIAA 5A Class 5A quarterfinals Wednesday at Archbishop Carroll High School. (PETE BANNAN – DAILY TIMES)

Springfield junior guard Mia Valerio fell to the floor and was clutching her knee in the opening minute of the game. She left the game, but returned minutes later and played the rest of the way. Valerio gave a gutsy performance, doing what she could to create scoring chances for herself and teammates. She finished with a team-high eight points.

“We came in and knew we were the underdogs,” Valerio said. “We respected them and we knew that they had really good players, so we came in thinking … let’s control what we can control, play as hard as we can and things will fall where they fall. … They started to run and it was kind of hard to stop it at one point. They got a lot of momentum that was kind of hard to stop, but I think we worked hard to the end.”

Springfield coach Ky McNichol wouldn’t have it any other way. Under her leadership, the Cougars won 19 games, including three games in a state tournament, something the team had never done before. Despite losing two of the school’s most prolific scorers to graduation in Alexa Abbonizio and Rachel Conran, and overcoming a season-ending injury to junior Lexi Aaron, who had begun to blossom on the offensive end, the Cougars made it this far and went toe-to-toe with mighty O’Hara for a second year in a row.

“When they put on a Springfield jersey, they’re going to compete and they’re going to play hard. That’s a non-negotiable thing with playing Springfield basketball,” McNichol said. “We know Mia and Anabel (Kreydt) are going to lead the way … and the rest of the kids are going to follow. We told them to leave everything on the floor tonight, go play your tails off and make O’Hara earn everything on their end of the floor. I said to them that everybody thought of this as a rebuilding year, a let’s-get-better-year, whatever you want to call it. But they exceeded expectations finishing in the final eight in states. They did things that we asked them to do and things we didn’t ask them to do and more. These kids have given their hearts to Springfield basketball over the last five months and every game for us was a grind. None of these games were easy and these kids refused to quit.”