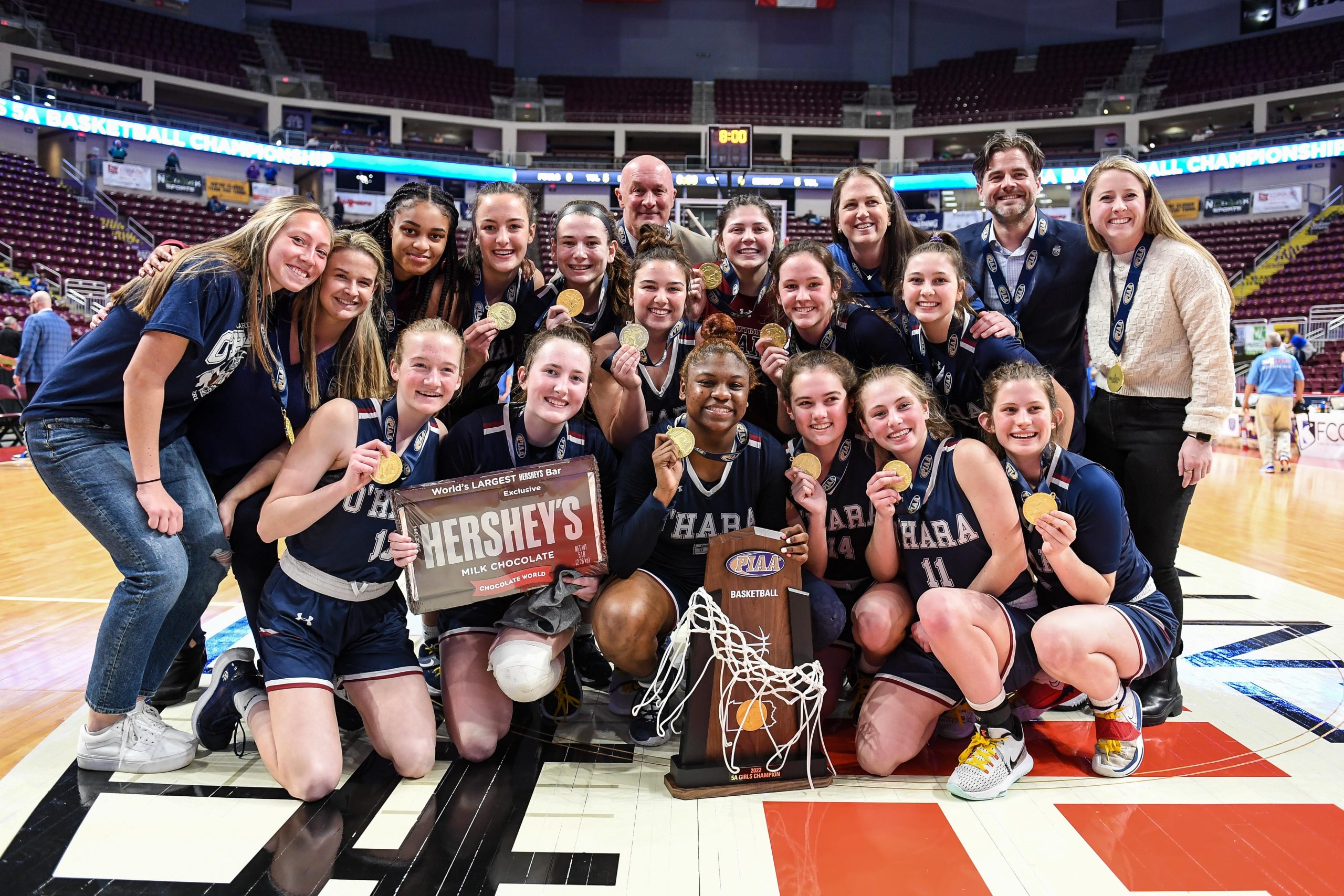 HERSHEY — When they were freshmen, Cardinal O’Hara seniors Maggie Doogan, Sydni Scott and Annie Welde couldn’t have predicted what their final game as high school players would look like.

They grew up together on coach Chrissie Doogan’s varsity team. Scott was a starter practically from day one. Doogan and Welde worked their way into the rotation and eventually became stalwarts in the lineup.

Friday evening at the Giant Center, O’Hara’s fantastic senior trio put the finishing touches on an amazing high school journey. With the Lions’ 42-19 victory over Chartiers Valley, they became PIAA Class 5A champions for a second year in a row.

“It’s really unbelievable,” Doogan said of consecutive state championships. “We’re all just really close and to be able to do this with them is an amazing feeling. I wouldn’t want to do this with anyone else.”

The team’s fourth senior member, Kristen Kutufaris, saw the floor in the final minutes of regulation, which made the entire experience that much better.

As freshmen, O’Hara’s would-be big three advanced to the state quarterfinals. The coronavirus pandemic ended their run in 2020, without losing in the state tourney. Last year, they helped the program win its first PIAA title with a win over Chartiers Valley in the final. Finally, in 2021-22 the seniors captured their first Catholic League championship. Saturday’s repeat state triumph was icing on the cake.

“When I think back to freshman year, Chrissie and all of the coaches did a good job of just building that confidence in all three of us,” Welde said. “Individually, especially, but all three of us were going to be needed eventually at the same time. Chrissie kind of said, you guys all do different things and all do it well and that was very evident tonight.”

Welde’s hot start carried the Lions (25-5) to an 8-2 lead after one quarter. She opened the game with a 3-point basket, one of nine triples on the night for O’Hara. As both teams played poorly in the second quarter, Chartiers Valley pulled even at 8-8, but the Lions finished the first half on a 9-3 run. Welde’s buzzer-beating 3-pointer sent the Lions into the locker room feeling pretty good about their chances of winning.

“It was a huge weight lifted,” Doogan said.

Chartiers Valley began the game in a 2-3 zone bent on clogging up the middle of the lane. The Colts (28-3) dared their opponents to shoot the 3-ball, a bold strategy that did not pay off for the two-time state runners-up. O’Hara made six field goals in the first half, five of which came from beyond the arc. After struggling in the first half, Scott got the Lions rolling with a triple in the third quarter.

“For me to not shoot the ball as well, I felt like my team was going to need me. They were going to need me to make the passes and keep playing good defense,” said Scott, who had five points and eight rebounds. “My coach wanted me to keep shooting and that gave me confidence also.”

Coach Doogan posed a question to her team at halftime.

“I asked the girls, ‘Does anybody want Sydni to stop shooting?’ and they all screamed ‘No, keep shooting.’ That’s the thing with this team, the confidence in each other is so great with these guys,” Chrissie Doogan said. “They really do love each other and play for each other as opposed to playing for themselves.”

Maggie Doogan drilled a 3-pointer and accumulated seven of her game-high 12 points during the Lions’ 12-4 run in the third quarter. The reigning Daily Times Player of the Year also posted eight rebounds, five steals and three assists on the night.

Freshman sensation Molly Rullo, who was held in check in the first half, found her rhythm after halftime and closed with eight points. Welde ended with 11 points on 4 of 7 shooting from the floor. She was the MVP of the night for O’Hara.

O’Hara’s defense once again made life miserable for the other team. In five state tournament victories the Lions allowed an average of 24 points per game. Neither their semifinal opponent nor Chartiers Valley cracked the 20-point mark. The Colts, routed 51-27 by O’Hara last year, scored two meaningless baskets in the second half and finished 5 of 28 overall from the floor. Their leading scorers – Aislin Malcolm, Perri Page and Marian Turnbull – produced only four points apiece.

“We’re so proud of how we have all played so well, especially with our defense. It wasn’t just tonight, it was the last five games, really,” Welde said. “Our good defense has kind of been our thing that we’ve stuck to. Especially in a game like tonight, you get out there and think of all of the things you can do differently. The coaches gave us a plan, we worked on it all week and we executed it almost perfectly. That was very evident. We have a lot of trust in our coaches and we know that if we do what they say, we’ll be successful.”

Maggie Doogan is off to Richmond in June and Scott will head to Marshall. Welde will have a preferred walk-on opportunity at Villanova.

Together, they are leaving a legacy like no other at Cardinal O’Hara.

“It’s one of the best feelings,” Maggie Doogan said.