PIAA Class 5A Girls Basketball: O’Hara returns to Hershey via rout of Mechanicsburg 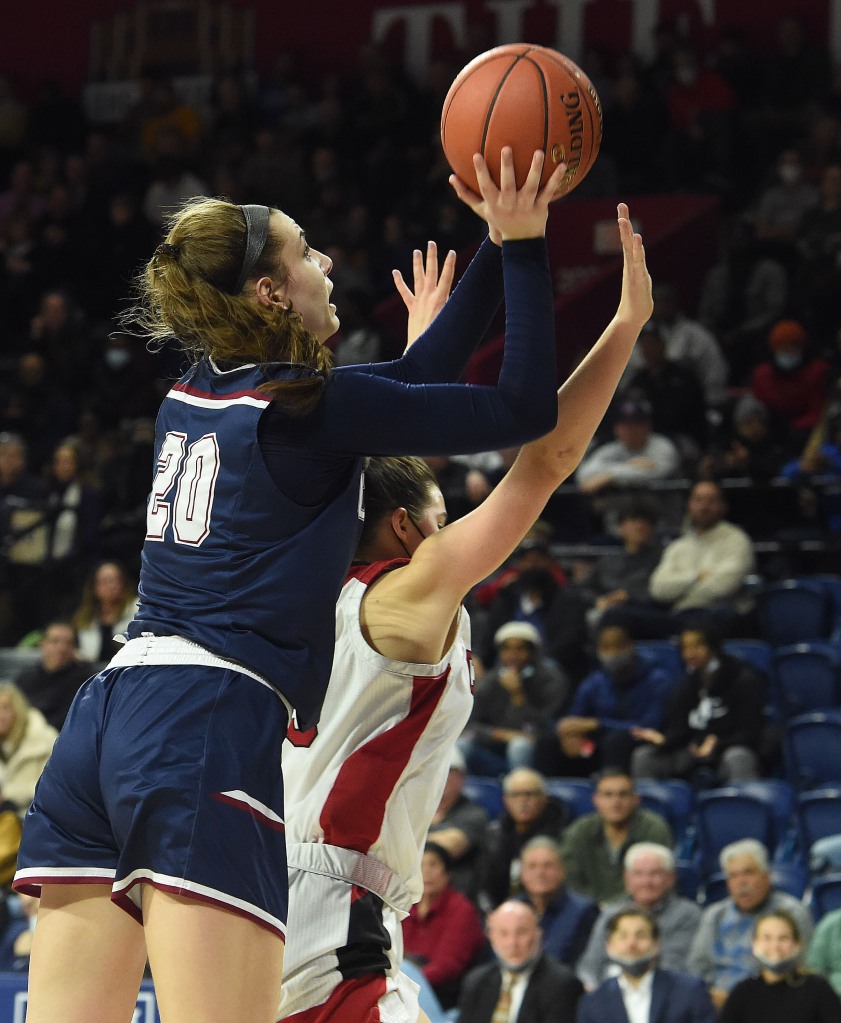 SHILLINGTON — It’s common for a basketball team dominating a game at halftime to become content or lackadaisical.

When one team is trouncing the opposition, mistakes can happen that could give the losing team new life in a game it has no business winning. Except when that winning team is Cardinal O’Hara.

The Lions showed their championship pedigree from start to finish Saturday afternoon at Governor Mifflin Intermediate School. District 3’s Mechanicsburg had zero chance of winning or making it a semi-competitive affair. The Lions came, wreaked havoc, and left after a 50-18 shellacking of Mechanicsburg.

O’Hara will return to Hershey next weekend to defend its PIAA Class 5A championship. The Lions will go to battle against Chartiers Valley in a rematch of last year’s final.

Saturday was practically a scrimmage for the title game. After a clunky first quarter in which they led 9-3, the Lions began the second on a 15-0 run. Freshman Molly Rullo tallied seven of her game-high 17 points in the stanza as O’Hara went into the locker room with a 28-5 cushion.

Coach Chrissie Doogan reminded her players at halftime that, even though everyone in the gymnasium knew the game was long over, anything could happen… such as a UFO sighting or a cow that flies.

“We told them that we wanted them to play the game like it was 0-0 and we talked about what (Mechanicsburg) could do to get back in it,” Doogan said. “We didn’t want to give up 3s and we didn’t want to put them on the foul line. Those were our two keys all night long. As long as we didn’t do that I thought we were going to be OK.”

Rullo and reigning Daily Times Player of the Year Maggie Doogan were awesome. Rullo did a good job cutting the lane and getting easy baskets all game. She also popped a 3-ball and grabbed seven rebounds.

“We had a lot of fun today,” said Rullo, who shot 7-for-11 from the field. “We had good practices coming in and we were looking forward to this game, so I think we were well-prepared and ready.

Maggie Doogan did a little bit of everything, producing 11 points, 12 rebounds, three assists, three blocks and a steal. Mechanicsburg had no one remotely talented enough to defend the Richmond-bound senior forward.

“I think we’ve been playing really well lately,” Maggie Doogan said. “Our chemistry off the floor, we’ve just been getting closer and closer every day. I think that translates on the floor as well.

“We’re O’Hara, this is what we do. It’s about keeping that tradition, playing together and playing O’Hara basketball. One more game left.”

O’Hara again played lock-down defense, forcing bad shots or sometimes no shots at all as Mechanicsburg had trouble finding clean looks at the basket. You’d have to go back to Feb. 22 in the Catholic League semifinals against Archbishop Wood to find the last time the Lions allowed 40 or more points in a game. In four state tourney wins, the Lions are allowing an average of 25.25 points per contest.

Mechanicsburg managed to shoot 1 of 20 from the floor in the first half and finished 5 of 40 for the game. O’Hara forced 17 turnovers, including 10 steals.

“We talk about making every shot hard,” said senior forward Annie Welde, who supplied five points, six boards, three steals and two blocks. “If every shot they take is difficult, then the less of them are going to go in. We pride ourselves on that. And we held them to five points in the first half, which is huge. Especially towards the end of the season our defense has really picked it up. It’s been evident, and that leads to offense, too.”

Senior guard Sydni Scott banked a pair of triples and finished with seven points, two assists and a steal. Sophomore guard Joanie Quinn came off the bench to contribute three points, four rebounds, an assist and one steal for the Lions.