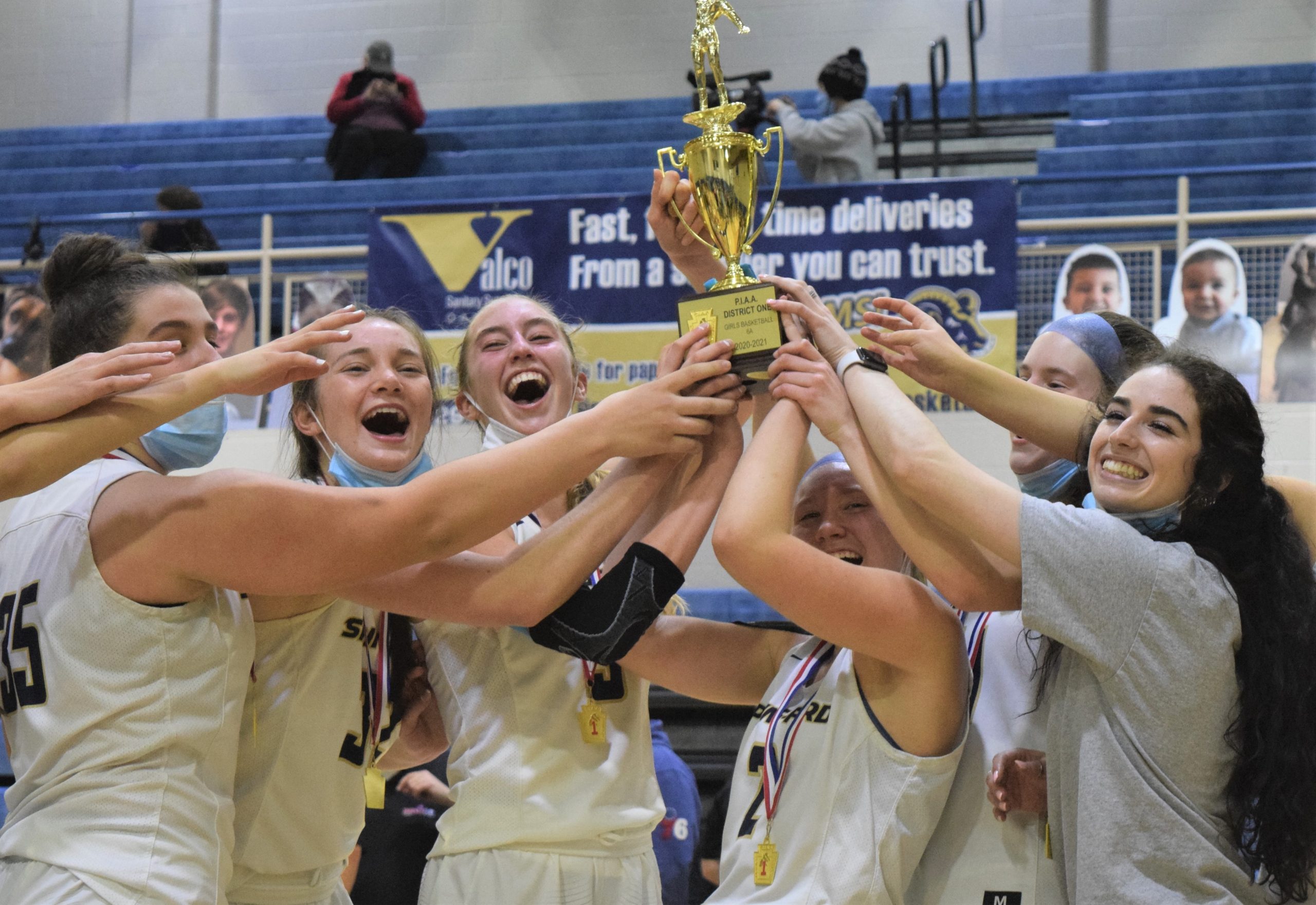 But that doesn’t mean it can’t reach new levels.

That’s exactly what took place Friday night when the 5-10 senior guard put on a performance for the ages in a program-record-tying 33-point night that delivered the No. 1 seeded Rams the District 1 Class 6A championship by way of a 52-36 victory over No. 2 Plymouth-Whitemarsh on the Rams’ home court.

Subpar games are few and far between for the Villanova recruit and Spring-Ford all-time leading scorer, but last year’s district third-place game, a 56-42 loss at PW, fell into that category according to Olsen.

That was not going to happen again.

“I think the adrenaline took over,” Olsen said. “Last year I played really bad against them and I didn’t want to do that again. Our team was just pumped, everyone was.

“I definitely didn’t want to lose to them two years in a row and to end our season. I wanted to move on and I want to win states so I guess you could say I’m on a mission.”

That mission suddenly appears attainable. With the District 1 champion entering the champions-only PIAA tournament in the semifinal round in 6A, the Rams (23-0) have the weekend to prepare for their Final Four matchup with District 11 champion Nazareth, 7 p.m. Monday at Spring-Ford.

“We’ve been wanting this the past three years and now we finally got it our senior year,” said senior shutdown defender Emily Tiffan (2 points). “Now we’re like, ‘That’s great, but now we just need two more wins to win a state championship’ and that’s something we’ve wanted our entire careers.”

It was the Rams’ first district championship since back-to-back titles in 2012 and 2013, the latter ending in a PIAA championship.

While Olsen’s performance dotted with step-back 3-pointers, and-one drives and buzzer-beaters was the night’s headliner, the co-main event was the Rams’ defensive performance that held the Colonials to their third-lowest point total of the season.

Plymouth Whitemarsh capped its season at 18-2, a second straight season as one of the superior teams in the region. PW was 25-4 a year ago, was a district semifinalist and was alive as a PIAA quarterfinalist at the time of the coronavirus shutdown last March. This winter they went a step further by reaching the District 1 title game (which doubles as a PIAA quarterfinal this year).

“Three years ago we were wondering if we would be a blip in the district,” said PW coach Dan Dougherty. “We played for a district championship (in 2017) and were in the state quarterfinals back-to-back years and we were right there. That group graduated with four seniors starting and a freshman starting, Anna McTamney, and we didn’t know if we’d have a winning season. But we were a layup hanging on the rim from beating Cardinal O’Hara in states, and the next year we win the league.

“We let go of last year and being alive in states. To come back and deal with the challenges of this season – we couldn’t get (non-league) games, no one would play us – we had an 11-day shutdown because we had a COVID case, so these kids fought through it all.”

“I feel really bad for the seniors that they didn’t get to have this experience at Villanova or Temple,” said Dougherty in reference to the final being played at the home of the higher seed instead of the college arenas of traditional seasons. “I told them, ‘You turned us into a district powerhouse. We went from a blip to being a district powerhouse.’”

PW had the stronger start, going up 6-0 on a Flanagan jumper at the midpoint of the first quarter. A Hudak jumper shortly after seemed to ease the nerves of the Rams, who had a challenge coping with the Colonials’ size advantage.

Lucy Olsen with 18 including this late 3. An incredible first half by the senior pic.twitter.com/JFCf4DhwAj

“What she did tonight was say, ‘I’m the best player on the floor. And I’m going to show you. I’m going to put my team on my shoulders and do whatever it takes for us to win this game,’” said Spring-Ford head coach Mickey McDaniel.

“She was engaging everyone else in the offense and communicating on the floor and doing her job on defense so it was all in the flow of the game.”

The Rams got the lead to double digits (33-22) at the 2:41 mark of the third on an Olsen pull-up. The Colonials would get no closer than eight the rest of the way as Spring-Ford went into clock-killing mode in the fourth quarter.

“Help defense was going to be really important, and that’s true no matter who we play,” McDaniel said, “but we also understood what some of their players did with spin dribbles and things of that nature. We made sure we were collapsing a lot more and I thought we did a nice job taking away some of those shots. McTamney is a terrific player and athlete and so is Flanagan, they’re all good players, but we were able to control a lot of what they like to do.”

After three straight years of setbacks in the district semifinals, Spring-Ford is back atop District 1.

“It’s extremely satisfying because our staff watches every day how hard this group works and how they listen and how they are coachable, how they help each other and how they are bonded together,” McDaniel said. “It’s wonderful seeing that attitude rewarded.

Plymouth-Whitemarsh vs Spring-Ford (District 1-6A championship)