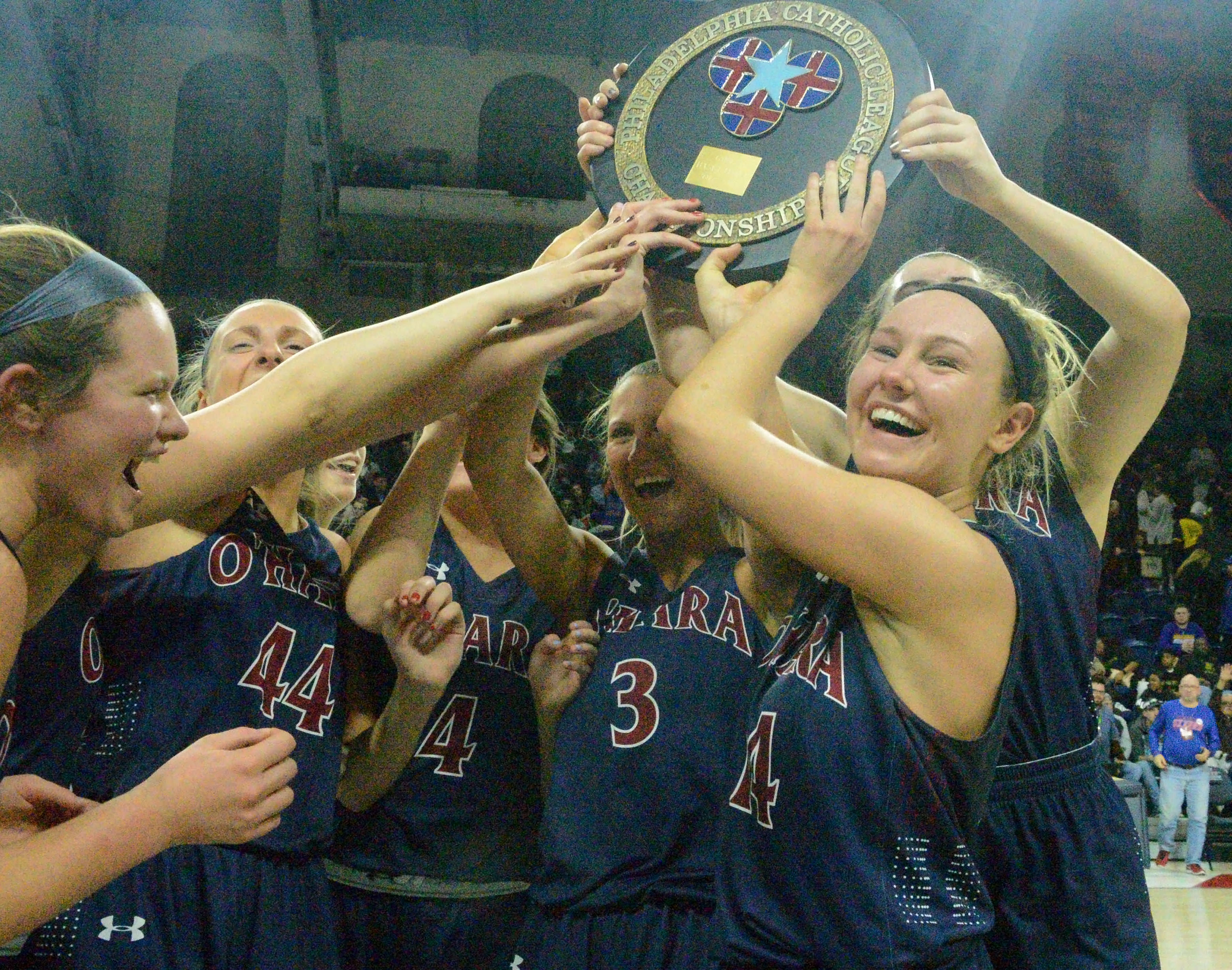 McGinty felt his blood pressure rise at times. He was agitated, too. In the third quarter, the Lions trailed by nine points against the physically imposing and super-talented Neumann-Goretti, a three-time defending PIAA championship dynasty.

McGinty never lost hope and neither did his players, whom he calls his “grandchildren.” The senior core of Cardinal O’Hara girls basketball — Maura Hendrixson, Kenzie Gardler and Molly Paolino — told each other they wouldn’t go down quietly. They started together for four seasons, and they were determined not to leave the Palestra without another championship plaque.

“It’s our senior year, we weren’t giving up. We were relentless the whole time,” Gardler said. “We were nervous when we got down, but we never gave up. That’s just the definition of our team — never giving up.”

O’Hara’s defense came alive in the fourth quarter as the Lions rallied for a 54-39 victory. The Lions (20-4), who’ve won 12 straight games, shot 19-for-22 from the foul line in the final quarter, aided by the unraveling of Neumann-Goretti in the final moments. The top-seeded Saints (17-7) were called for three technical fouls. Hendrixson would shoot six straight free throws to turn what had been an exciting final quarter into a lopsided affair.

It was defense, and a cool confidence at the foul line, that powered the Lions to their second straight Catholic League title.

Inside the media room, McGinty offered reflections in a stream of consciousness, filled with jokes and laughs about wanting to adopt Gardler and a mention about Paolino, Gardler and Hendrixson’s habit of making Twitter and Instagram video mash-ups. His comments were rooted in love and appreciation for those three players.

“They started like 114 straight games together, except for when Molly got hurt (last season). They’re special,” he said. “The first time we played at O’Hara (with his seniors) was against Gloucester Catholic, and they’re a really good team. We win there and somebody says to me after the game, ‘These kids are really special.’ They were, and they are. They’re great kids and they love basketball.”

O’Hara waited until the fourth quarter to unleash a full-court press. It’s not something the Lions do very often.

“We really don’t run the press,” Hendrixson said. “But we practice it a lot.”

. @OHaraGirlsBball is your Catholic League champion for the second year in a row.

The Lions stole two inbound passes. First it was Paolino, the Lions’ defensive whiz, who dove on the floor, corralled the basketball and quickly dished to Hendrixson underneath to tie the score. Then Hendrixson got a steal and a layup to give O’Hara its first lead since the second quarter with six minutes to play. Unable to solve O’Hara’s defensive puzzle, the Saints promptly threw the ball away, a third giveaway in as many possessions.
That stretch of turnovers, resulting in sixpoints, effectively buried the Saints, who gave the ball away 11 times in the second half, including seven times in the fourth period.

said Paolino, who hit 3 of 4 foul shots and led all O’Hara players with three steals, none bigger than her dive in the fourth to set up the go-ahead basket. “When we went down we just knew we had to get up.”

The Lions decided to press because they were struggling to stop the Saints in other ways. Neumann-Goretti dominated on the glass and was simply too physical underneath. The Saints put up 52 shots, compared to O’Hara’s 33 field-goal attempts. And the Saints outrebounded the Lions, 33-14.
The stats, for three-plus quarters, would seem to suggest the Lions had no chance. Jabria Ingram, Tatiana Jones and Daijah Parmley had their way driving to the basket and securing offensive boards. It appeared this wouldn’t be O’Hara’s night.

But then the Lions decided it was time to go after the Saints, and take the game from them.

“We were going to save it until the end. We wanted to see how they would do without us pressing,” said Gardler, who poured in 17 points, grabbed six rebounds and handed out two assists. “But once we started pressing, we knew we were going to take the momentum.”

After the Lions regained the lead they never looked back. They scored all nine of their points from the charity stripe in the third quarter, and sealed the win with freebies down the stretch. In the second half, O’Hara went 28-for-33 at the line, overcoming an 0-for-8 dry spell from the field in the third quarter. O’Hara outscored Goretti 25-7 in the fourth quarter.

Hendrixson went 11 of 12 at the line and scored 15 of her game-high 26 points in the final quarter.

“It got a little scary when we were down nine,” Hendrixson said. “But we never gave up.”

Other players stepped up, too. Kerry Patterson got up after taking a borderline flagrant foul and banked two free throws to make it a seven-point lead. Stephanie Huseby came up with a steal and hauled in a big rebound late in the night. Freshman Siobhan Boylan got a steal and made two free throws to help stem the tide when O’Hara was slowly digging itself out of a nine-point hole in the third quarter.

“Everyone contributed,” Hendrixson said. “It was a huge team win.”

After the graduation of two three-time All-Delcos in Mary Sheehan and Hannah Nihill, O’Hara had to rebuild this season while maintaining high expectations for itself. Many thought the Lions couldn’t repeat, not without Sheehan and Nihill around.
But maybe some folks forgot all about those “grandchildren” of McGinty’s. Together, they are Catholic League champs all over again.

“Basically we came into this as underdogs and we were going to play like underdogs,” Gardler said. “We were going to come in, dive on the floor and do all the little things. That’s just who we are.”

District 1 Preview: Wissahickon gets another shot at Penncrest
Welde siblings share special experience at the Palestra