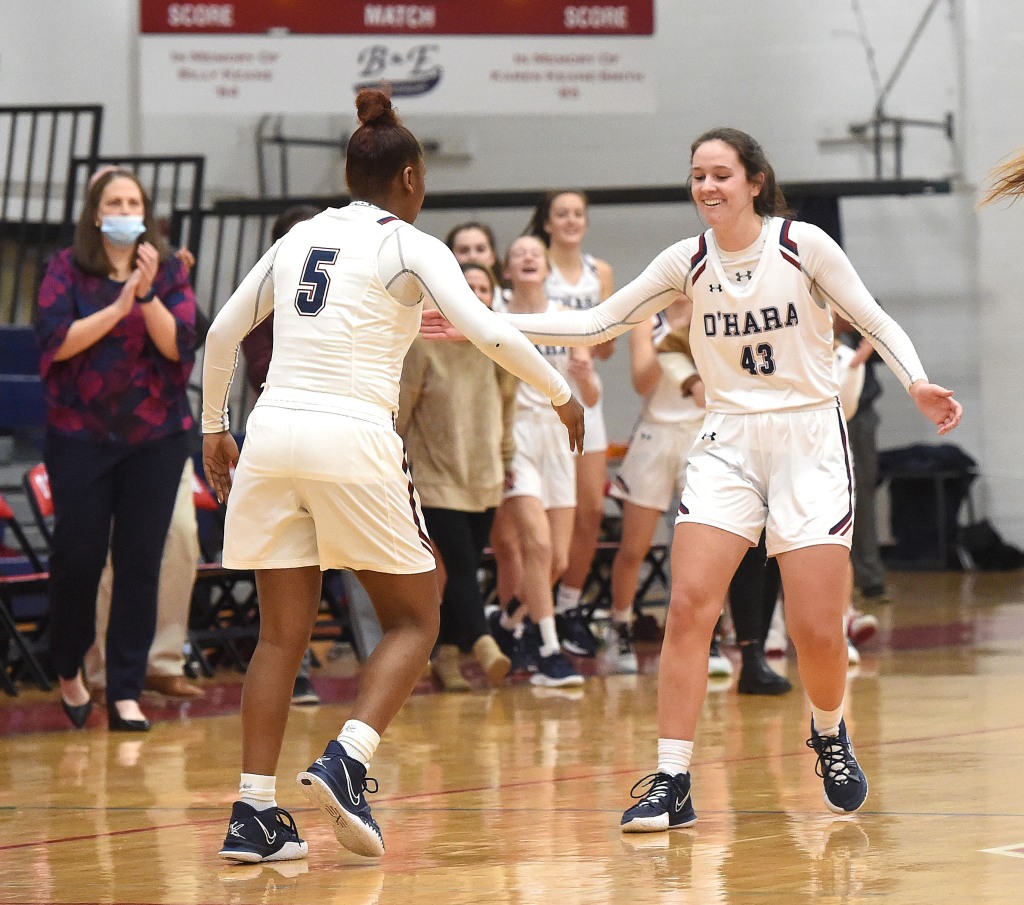 Cardinal O'Hara's (5) Sydney Scott gets a five from (43) Annie Welde after Scott hit a 3-point basket in the first quarter against Archbishop Wood. The Lions went on to a 61-54 victory and improved to 5-0 in the Catholic League. (PETE BANNAN - DAILY TIMES)

MARPLE — Cardinal O’Hara and Archbishop Wood could meet again. After Tuesday’s showdown at O’Hara, the reigning PIAA champions and state powerhouses might see each other in the Catholic League tournament next month. Players and fans deserve that much.

But O’Hara won the regular season meeting by knockout. No doubt about it.

The game wasn’t as close as the 61-54 final tally made it seem. The Lions were absolutely white-hot to start the night. They shot 14-for-20 from the field in the first half, scored 24 of the first 33 points, and went into the locker room at halftime up 34-13.

Last March, O’Hara fell to Wood in the Catholic League final. The Lions went on to win the program’s first PIAA championship (Class 5A), but senior forward Maggie Doogan hasn’t forgotten that Wood had their number coming into the 2021-22 campaign. Not entirely.

“I don’t know about the other seniors, but for me it’s always in the back of my mind,” said Doogan, the reigning Daily Times Player of the Year. “No one ever wants to feel like that again. But it’s just one game at a time to get back to where we were last year.”

Well, if Tuesday’s outing was any indication, the Lions have the potential to be even greater than last year’s squad. In fact, they might be there already. They came out and moved the ball around with precision, finding open opportunities everywhere on the floor. They made life difficult for Wood’s top player, Vanderbilt commit Ryanne Allen, who scored only two points in the first half. The Lions could do no wrong in the opening 16 minutes. They clicked in every way, and frankly, that should frighten everyone in the Catholic League and the rest of the state.

“I think our entire team, we all just want to win for each other,” said Doogan, who canned five of her first six field goal attempts. She scored a team-high 19 points. “Sharing the ball. We don’t care who is the leading scorer who has all our points. All that matters is the end score. So just sharing the ball and kind of being a team player, getting everyone involved, is really important.”

O’Hara coach Chrissie Doogan couldn’t have asked for a better start Tuesday against one of their biggest rivals. She was proud of the way freshman Molly Rullo, who scored eight points in the opening period, handled the pressure of the big moment. And junior Bridget Dawson, who transferred from Penncrest before the school year, flourished on defense in her role in the starting five.

“I thought Molly was absolutely terrific in that first quarter,” Doogan said. “Maggie didn’t score but I think she had three or four assists in the first quarter. They all played composed. We just wanted our seniors to play like upperclassmen and they were able to do that tonight. You know, I told (junior forward) Annie Welde in the locker room that when she hit that 3 to open the game it gave everyone that sigh of relief, like, OK, we got this.

After a first half in which they shot 4 of 17 from the floor, the Vikings got their act together. Allen caught fire in the third quarter, becoming a one-woman show, hitting step-back treys and driving the lane and getting to the foul line. Allen finished with a game-high 26 points.

Wood trailed by as many as 26 points in the second half, but chipped away and pulled within single digits before it was over. The Vikings (10-6, 3-2) applied a full-court press, but the Lions handled it every time. After an Allen triple early in the fourth, Sydni Scott found Doogan on an outlet pass for an easy lay up to extend O’Hara’s advantage to 48-31. Wood got within single digits with less than a minute to play (and used every timeout it had), but ultimately the Lions managed to win with relative ease.

Scott scored 15 points and shot 3-for-4 from long distance. Rullo, the granddaughter of Temple legend Jerry Rullo, who was a member of the first NBA championship team with the 1946-47 Philadelphia Warriors, produced 15 points, three assists, one steal and a blocked shot. Welde added 10 points and four rebounds for the Lions (12-3, 5-0).

“You can’t compare to what it was last year. We have a new team and Wood has a new team,” Welde said. “But I also think knowing what happened last year, that definitely gave us a little bit of extra motivation. This year we hope it’s our turn.”

Archbishop Carroll 49, Little Flower 16 >> The Patriots (13-4, 6-0) kept pace with O’Hara atop the Catholic League standings with a rout at home. Grace O’Neill and Taylor Wilson each scored a game-high 13 points, while Brooke Wilson contributed 10.

Carroll is scheduled to host O’Hara next Tuesday at 7 p.m.

Conwell-Egan 63, Bonner-Prendergast 42 >> The Pandas fell behind 21-4 after the first quarter and never recovered.

Bridie McCann poured in 26 points and Leah Walker chipped in six for Prendie.