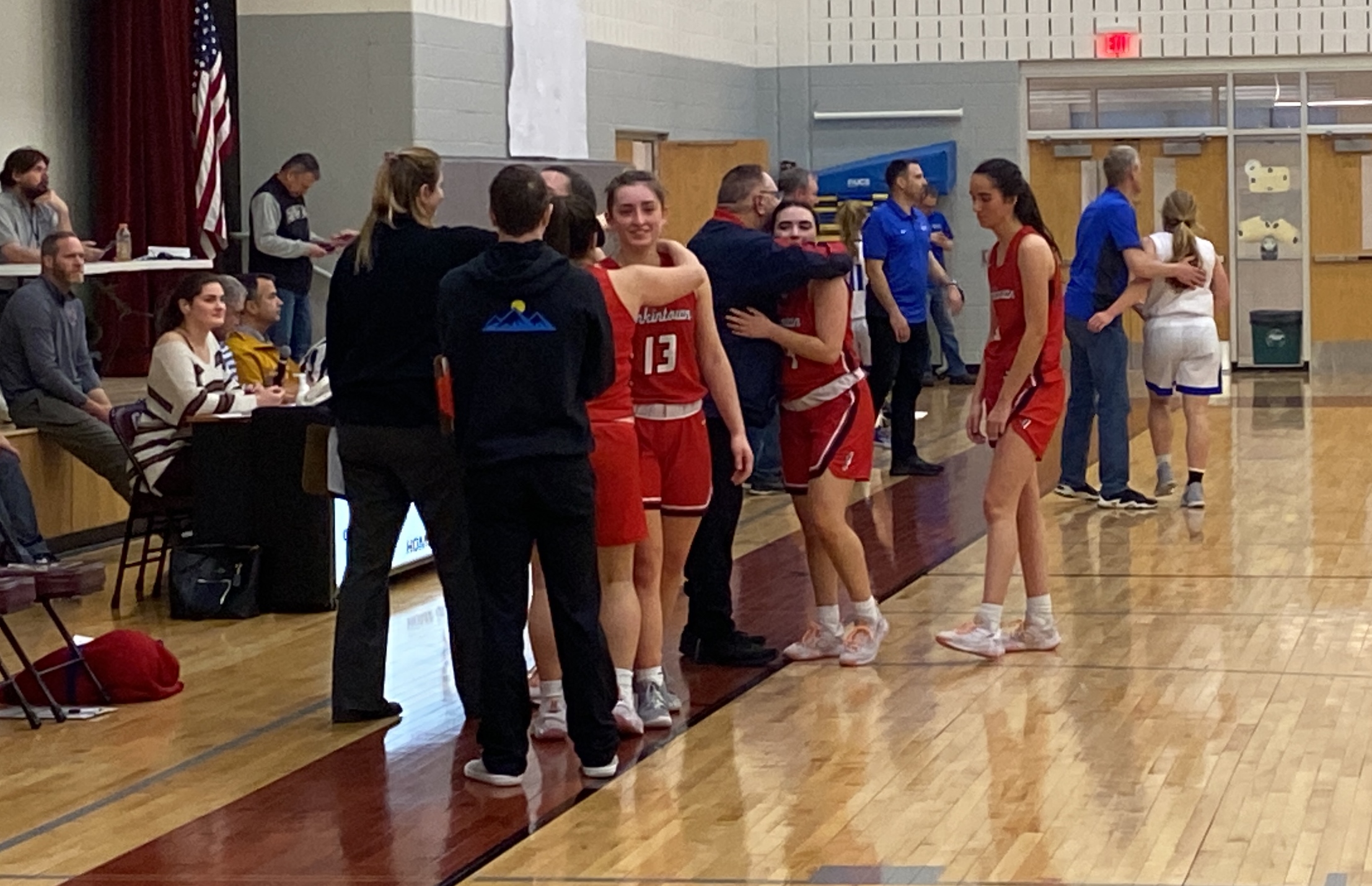 Jenkintown's Katie McGrath (13) is hugged by teammate Sarah Cummings (2) in the fourth quarter of the Drakes' PIAA-1A second round game against Northumberland Christian on Monday, March 14, 2022 at Lehighton Elementary Center. (Mike Cabrey/MediaNews Group)

LEHIGHTON >>The Jenkintown girls basketball team’s deficit stood at 21 in the third quarter but senior Katie McGrath was still hustling, still fighting to extend her career with the Drakes.

Coming up with a steal, McGrath raced down the court and after missing on a jumper, took a tumble on the baseline. But she got back up, knocked the ball loose, dove to secure it then while still on the ground lobbed a pass to Lily O’Brien, who drove to the hoop for a layup and a hard-earned two points.

“I knew this could of been my last moment playing on the court as a high schooler so I definitely wanted to put my heart out there and hustle on every play,” McGrath said. “And show the lowerclassmen what it takes to win.”

McGrath and Jenkintown battled hard throughout Monday night’s PIAA Class 1A second round contest but Northumberland Christian’s senior trio of Emily Garvin and twin sisters Anna and Emma Ulmer were too much to overcome.

In a rematch of last year’s state semis, the District 4 champs ran off 21 straight points to take a 25-4 lead in the second quarter and never looked back, beating the Drakes 58-30 at Lehighton Elementary Center.

“Going into every game you got a shot, but they just jumped on us,” Jenkintown coach Jim Romano said. “Difficult time rebounding and offensively we struggled a little bit.”

After a McGrath jumper made it 4-4, the rest of the first quarter was all Northumberland Christian, who scored the period’s last 17 points. Baskets from Emma Ulmer then Anna Ulmer to open the second quarter continued the run before the Drakes finally ended their drought with a Molly Stephenson 3-pointer.

“My mindset going into the game today was stop No. 15 (Garvin) on her aggressive side of the game and just to box out the tall girls for rebounding,” said McGrath, a Muhlenberg College commit. “And they were tough, they were really aggressive tonight. We just couldn’t connect on our shots either in the first quarter but yeah nothing was dropping for us tonight.”

Jenkintown collected the first half’s final four points to make it 32-14 but could not get any closer after the break as the Drakes could not reach the state quarterfinals for a sixth consecutive season.

“At the end of the second quarter we made two straight baskets, two possessions and then the next two we stopped them but we couldn’t put it in the hole,” Romano said. “So that would have been four possessions, you score on all four of those possessions then you’re definitely in the game. “

After falling to Lourdes Regional in the 2016 PIAA second round, the Drakes made the semifinals four times, advanced to the final twice and won the state title in 2018. Jenkintown’s 2019-2020 team was 29-0 and in the quarterfinals when the remainder of the season was canceled due to COVID-19.

“We used our opportunity getting into the state tournament as another step up and just kind of finishing off what we started back in 2018 with our state championship,” McGrath said. “But definitely the last four years was a great ride playing with the Kolbs and Molly Walsh, Carly Mulvaney and getting in the state playoffs at Hershey last year, it was definitely fun the last four years and I won’t take it for granted ever.”

Jenkintown got to last year’s Class A final by knocking off Northumberland Christian 48-26 in the semis. Garvin picked up three fouls in the first quarter that night then suffered an ankle injury in the third and did not play the rest of the game. But in Monday’s matchup – which was postponed from Saturday due to a winter storm – Garvin led all scorers with 21 points.

“I’m sure on their calendar, especially when they saw they had an opportunity to play us, to be ready to go,” Romano said.

The Drakes, meanwhile, had few answers for the rebounding and defense of the Ulmer twins – Emma listed at 6-foot-3 with Anna at 6-foot-2. Emma Ulmer finished with 17 points while Anna Ulmer hit a pair of 3-pointers in the first quarter in scoring 15 points as Northumberland Christian (21-3) moves on to face Christian School of York – which beat Marian Catholic 47-44 – Wednesday in the quarterfinals.

“We couldn’t just grab rebounds from them,” said McGrath of the Ulmers. “They were very lanky and mobile. Those two girls were just very mobile, the whole game we just didn’t have the height advantage like they did.”

McGrath, a four-year varsity player who was the lone starter back from the 2021 state finalist squad, finished her last game at Jenkintown tying O’Brien for the team high in scoring with nine points as the Drakes ended the season at 15-13.

“Katie has been a tremendous player for us,” said Romano of McGrath. “She has tremendous talent and she tried to do her best. It’s really hard sometimes when you’re out there and you put your heart and soul in it for four years but like I said she made some really individual goals – 1,000-point scorer, first team all-league on their last four years of basketball.

“Making the final four, last year getting into the state championship game. She has a lot. She did a lot for the team and definitely our program so we’re definitely going to miss her.”

Jenkintown never led, but pulled even twice early, the last time at 4-4 on McGrath’s jumper. Anna Ulmer connected on a 3-pointer before Emma Ulmer scored the next five for a 12-4 Warriors advantage. A long two from Eden Treas extended the margin to 10.

After baskets from Emma Ulmer and Garvin, Anna Ulmer drained another trey for a 21-4 lead at the end of the first eight minutes.

Northumberland Christian’s advantage was as large as 22 in the second quarter, the Warriors up 32-10 before two Julia Walsh free throws at 2:34 and a McGrath jumper had the Drakes down 18 at intermission.

A Sarah Cummings basket early in the third had Jenkintown’s deficit at 34-16 but by the end of the quarter Northumberland Christian was up 25 at 47-22 after buckets from Garvin and Emma Ulmer.

PIAA Class 1A Second Round