No longer an underdog, Ridley looks to repeat as Central League champs 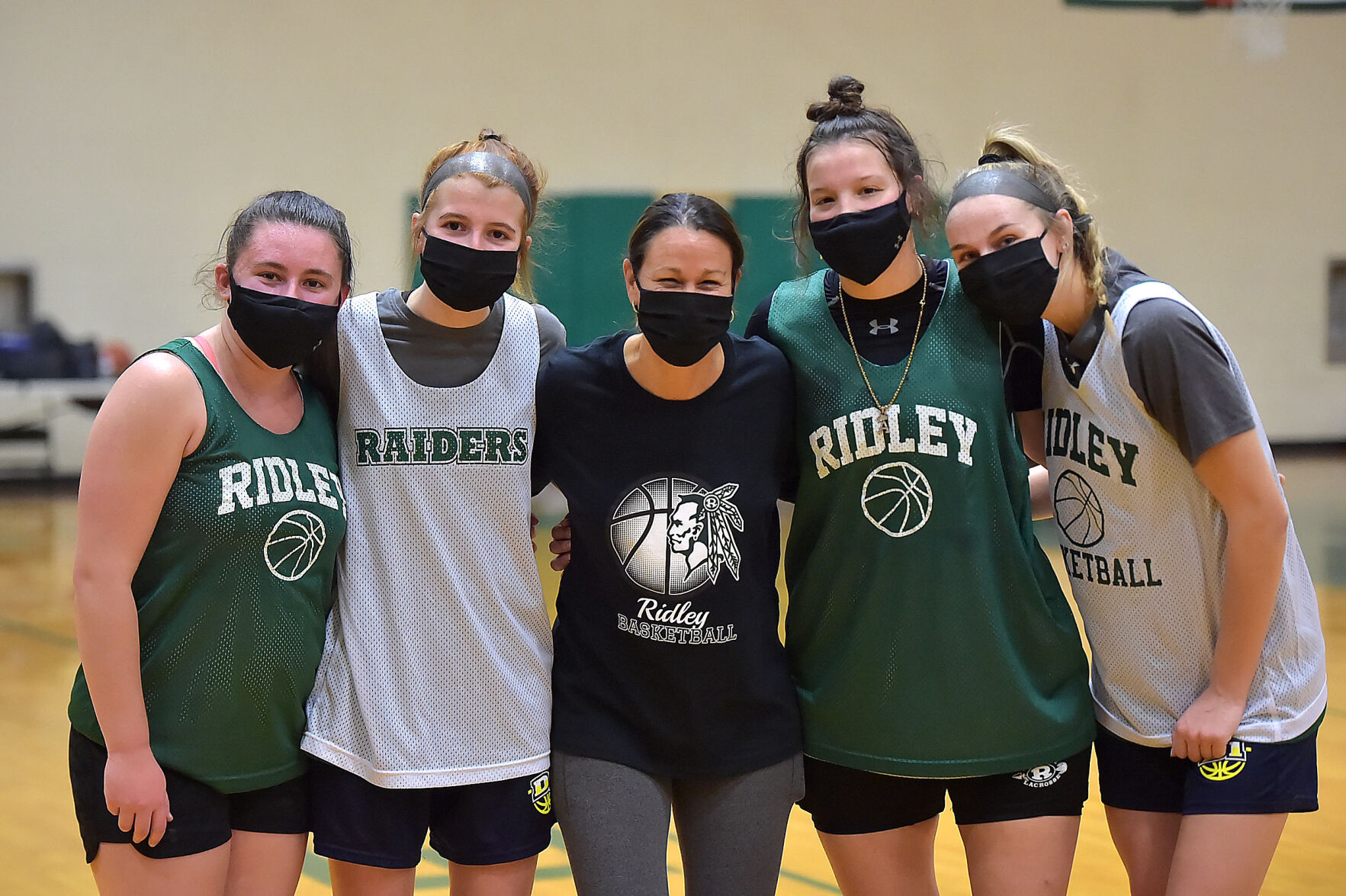 RIDLEY TWP. —They sat six feet apart on the gym bleachers, listening intently as their coaches provided the rundown of the night’s practice.

Most importantly, everyone wore a mask and followed COVID-19 protocols. It’s become as routine to the players as brushing their teeth in the morning.

Wednesday was the second time Ridley’s girls basketball team gathered in full since the official re-start of winter sports practice at the high school. For senior leaders Lindsay Boyd, Shannen Hinchey and Kylie McNicholas, having a chance to be a team again is a privilege they don’t take for granted.

“Basketball-wise, we were on Zoom pretty much every day, since right after the season ended. Coach Roe (Falcone) really took advantage of that,” Hinchey said.

“It’s been difficult. We felt so bad for the seniors (last year) and didn’t think we had it as bad as juniors, but then it carried over to our senior year,” Boyd said. “We’re definitely happy to be back. It’s been tough without it.”

The Green Raiders have hit the ground running as they prepare for the opening of their regular season, one they’re hoping to begin the week of Jan. 18.

Falcone is happy to have them back. She has formed a strong bond with her players since the pandemic hit. Too many group texts and Zoom meetings to count.

“We call her ‘mom’ all the time, just to embarrass her,’ Hinchey said. “Not only a coach, she’s a role model and a mentor, too.”

Falcone’s message to the team? Keep it loose, have fun, and be grateful.

“I think we have to maintain a positive attitude, as I’ve told the kids,” Falcone said. “We did Zoom workouts for the three weeks (in December) we were shut down, just trying to make the most of it. This is a horrific situation. I love all of my kids. Let’s just appreciate what we have right now.

“I love these kids. They never complain about what’s going on, they are just focused on working and getting better. They love being out here together and just having the opportunity to play again.”

“We wanted the opportunity to repeat,” Falcone said. “Let’s be safe, let’s be together as much as possible. We’re trying to make the most out of whatever the situation is … and get an opportunity to repeat, especially for these seniors who have worked so hard and have committed so much to the program.”

Savanna Moss and Kenzie Griffith are other senior members of the 2021 Green Raiders. Moss (Gwynedd Mercy) and Boyd (Elizabethtown) recently made their commitments to continue their basketball careers at the collegiate level.

“Coach Roe has been reiterating to us that we’re the team to beat and we have a target on our backs and we’re on the road to repeat,” Boyd said.

It’s been more than two decades since a Ridley girls basketball team entered a new season as defending champions in the league.

Wearing a mask and maintain social distancing on the bench will be … well, a bit weird. The Pennsylvania Department of Health and Gov. Tom Wolf have mandated a universal mask order for indoor sports. Basketball players must have a mask on during practice and games.

“We’re doing a lot of running,” Hinchey said. “Coach Roe’s always telling us, ‘mask up, mask up.’ It’s different for sure.”

Central League boys and girls basketball will play a conference schedule of 11 regular season games. Some Central League open the season as early as Tuesday, Jan. 12. The top finishers after 11 games will qualify for the leagues playoffs. Schools can be eligible for the District 1 playoffs if they choose..

Local high school leagues are in the process of organizing their season schedules. Some members of the Del Val and Philadelphia Catholic League may be unable to compete due to coronavirus concerns.

The Ches-Mont League, which includes Sun Valley, will play a 13-game basketball season followed by a postseason tournament.