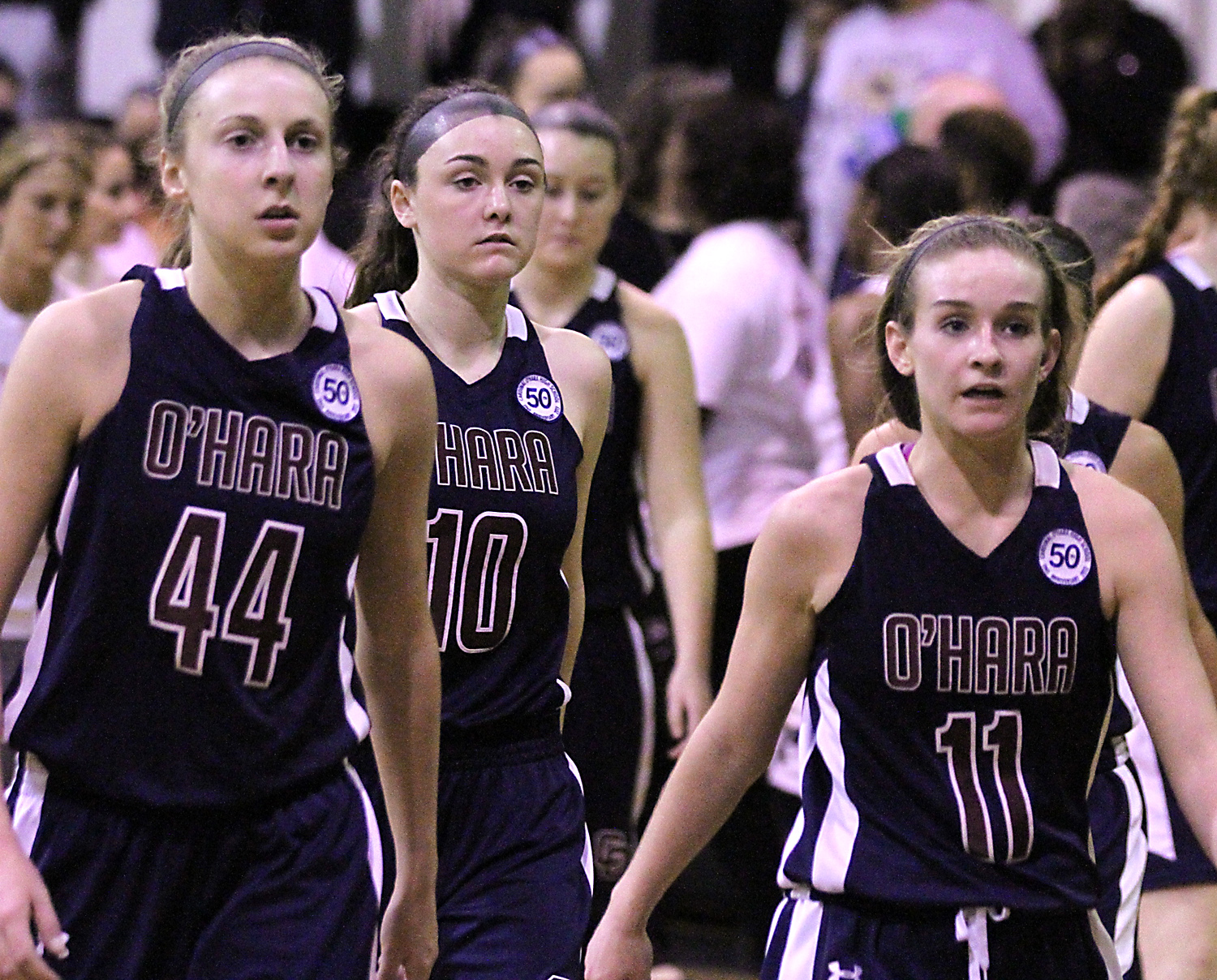 The Lions, who had been ranked No. 1 in PIAA Class AAAA before last week’s one-point loss to Ursuline Academy (their first of the year), realized the expectations were high against Neumann-Goretti, which is on an unparalleled winning streak and arguably the best team in the state regardless of PIAA classification.

Whether they won or lost this particular outing had no long-term effect on the Lions. What they couldn’t do was act intimidated and crumble under the pressure of playing a phenomenal team in a tough environment on the road.

In that respect, the Lions succeeded despite a 52-46 defeat. If they can take one lesson from this particular outcome, well, you can’t give a team of Neumann-Goretti’s caliber too much leeway. They’ll make you pay every time.

For instance, the Lions and Saints went from being knotted at 23-all early in the second quarter to N-G pulling ahead with 10 straight points. The Saints exploded in transition, excelled with their trap defense and made life particularly miserable for the Lions during that one crucial stretch.

“The biggest thing was the last three minutes in the first half,” coach Linus McGinty said. “It goes from being tied to us being down by 10 just like that…”

In a game that featured seven Division I commitments, O’Hara allowed the uber-talented Alisha Kebbe (Syracuse),

O’Hara’s Hannah Nihill, right, tries to get her shot by Neumann-Goretti’s Minika Glenn in the second half of Monday’s Catholic League game.

Kamiah Smalls (James Madison), Jada Russell (Wagner) and Morgan Lenahan (Longwood) to take full control before intermission. The Lions found themselves trailing by 10 points at halftime to the Saints (15-0), who were on the way to their 45th consecutive victory.

“What killed us was the second quarter. With 2:30 left we were down one, then we go into halftime with a 10-point deficit, which was not ideal for us,” said All-Delco junior Mary Sheehan, a St. Joseph’s commit. “If you’re down one or two or three, you think about how we’re going to win this game, but down by 10 we’re thinking how are we are going to chip away at this game.”

The Lions (12-2) relied on the hot hand of Kenzie Gardler to bring them back. The Villanova-bound sophomore guard heated up in a big way in the third quarter, drilling three 3-pointers and scoring 12 points. She finished with a game-high 19 points and five 3s.

“Like I said to Mackenzie, she was the definition of responding tonight,” said Sheehan, who finished with 18 points and seven rebounds. “She didn’t get to play a whole lot in the first half because she got into foul trouble. But she came out in the second half and lit it up. We didn’t put our heads down, that last 2:30 in the first half was not us. We came out and battled, but we just weren’t on the right side of it tonight.”

Despite Gardler’s hot shooting, the Lions only managed to trim their deficit by one point going into the fourth quarter. The Saints had a bevy of second and third chances thanks to a stellar offensive rebounding performance by Kebbe (18 points, 12 rebounds) and Smalls (14 points, nine rebounds).

“We knew we couldn’t necessarily stop them, it was more about trying to contain them,” Sheehan said. “We didn’t want to foul. When they are coming at us, we’re going to play it straight up. If they’re coming at us wild, maybe they can bang it against the backboard and we can get into position to box out. We didn’t do too good with that, it was another thing that hurt us. They were aggressive and all we tried to do was contain as best we could.”

“We understand this is an elite squad,” Sheehan said. “They do not look the same as they did my freshman and sophomore year. They are quicker and not as big, but they’re steady across. We knew we could compete, we were confident in ourselves. We actually took the Ursuline loss pretty well considering that it made us defeated. I don’t think we could have come in more prepared.”

Trailing by 10 in the final period, the Lions kept fighting. Lauren Leicht, who earned the start and played well in place of an injured Molly Paolino, made a pair of free throws and Sheehan hit a long deuce to cut N-G’s lead to six. With less than a minute to go, Leicht forced a steal and dished to Maura Hendrixson (eight points), who swished her team’s ninth 3-pointer to pull the Lions within three, 59-56. Alas, the Saints iced the victory from the free-throw line.

O’Hara hopes it hasn’t seen the last of the Saints, who hadn’t allowed more than 45 points in a game prior to Monday’s. O’Hara also gave up a season high in points.

“We know Neumann-Goretti is a really good team, but we’ve only got to beat them once,” Sheehan said. “We need to take the momentum that we had in the second half and put it to the rest of the season, go hard in all of our games and hopefully see them again when it really counts.”

Archbishop Carroll 47, Bonner & Prendergast 38 >> The Patriots erased a four-point deficit by outscoring the visiting Pandas, 21-8, in the fourth quarter. Leading the way was Molly Masciantonio, who netted 18 points. Bella Sorrentino dumped in 11.

Princess Clemons had a team-high nine points for Prendie.

Merion Mercy 72, Ridley 51 >> The host Green Raiders (7-8) struggle defensively as they allowed 21 points in both the second and third quarters. Hailee Mayer poured in a team-high 12 points and Izzy Hamlin added 10.